"...Velardi Ward, ordained by a worldwide organization called Roman Catholic Womenpriests, says some express surprise that she is a woman of the cloth. Like her sister many years ago, others say that's not even possible."

"Women and men are created equal by God and can therefore equally represent Christ," the vision statement of Roman Catholic Womenpriests says in its counterpoint...."

Posted by Bridget Mary Meehan at 10:36 PM No comments:

"As part of its anniversary celebration in Chicago on Sept. 18, 2010, WOC had the first public showing of "Pink Smoke Over the Vatican," a one-hour documentary on the women priest movement made by Jules Hart for her company, Eyegoddess Films."

"Hart, who is not Catholic, said she was moved to make this film after she met some of the women priests and their supporters because "it is not every day that you meet people who give up everything for what they believe in."

A DVD will then be available for purchase for $20 from Jules Hart at www.eyegoddess.com.

Posted by Bridget Mary Meehan at 10:20 PM No comments:

"...But perhaps it was the case of Sister of Charity Louise Lears that gave him the boost he needed. Louise Lears, who has a Ph.D. in medical ethics, served on the pastoral team of Saint Cronan Parish and was an adjunct professor at St. Louis University. Her support for, and presence at, the ordination of two members of the Roman Catholic Women Priests group in 2007 that got Burke’s Irish up. The ceremony was held not in the local cathedral but in a synagogue whose rabbi was a strong supporter of her sisters’ ministry."

"Archbishop Burke, with scant attention to dialogue and little regard for her well-being, placed Louise Lears under interdict, prohibiting her from working in diocesan venues or receiving the Catholic sacraments. In fact, he issued the decree the day before he left St. Louis for greener pastures in Rome. He now heads the court that would be one of the few ecclesial venues for appealing Sister Lears’ case. So much for due process."

.... Roman Catholic Womenpriests, a movement for women's ordination that began in 2002, supervised the ordination. Since that time nearly 100 women worldwide have been ordained, although none have been recognised by the church.

These are not women who wish to break off from the church; they want to reimagine it...

As St Mary's celebration recedes, there is already talk of another Josephite, Sister Irene McCormack, becoming Australia's next saint.

"Sister McCormack lived and worked among the poor in a remote village in Peru. When the male priests left the village because of threats of violence, Sister McCormack stayed. She and a fellow sister led communion, celebrated the Eucharist, and performed weddings and baptisms. "

I sincerely hope that Sister McCormack is Australia's next saint. Her courage to stay with the people and serve as their "unofficial priest" led to her execution by a military group.

Indeed as Professor Laura Bugg concludes it is time for the next generation to stand up, claim their authority and address the hierarchy "on matters concerning the good of the church" as Vatican ll mandated. The future of the church is in our hands and we are called to live the Gospel of justice and equality now. Let us be grateful for holy women like St. Mary Mackillop and Sister Irene McCormack who have gone before us as role models of courage in living their vocations- Mother Mary was not deterred by a bishop's excommuniction, Sr. Irene ministered as a priest in spite of great danger. Those who live justice and speak for the equality of women in our church and world are the voices of God in our time.

Posted by Bridget Mary Meehan at 10:55 AM No comments: 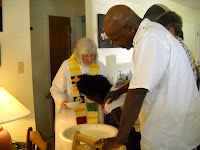 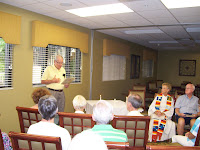 Dena O'Callaghan, RCWP
presides at liturgy with
community in Florida 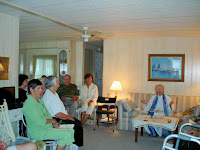 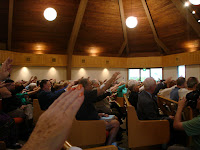 John GreenLeaf's Blog/Another Voice
(Special thanks for this excellent article)

"Catholicism has lost more people to other religions or to no religion at all than any other single religious group in the United States.

These are individuals who were baptized and raised Catholic but who now no longer identify themselves as Catholic. Furthermore, if one excludes immigrants and converts from the calculations, the Catholic Church has lost to other religions or to no religion at all, 35.4% or more than one-third of the 64,131,750 of its native born members. This amounts to almost 7 out of every 20 adults who were baptized as Catholics."

"Archbishop John Nienstedt has the answer! SMALLER IS BETTER……A couple days ago, in an interview with The Associated Press, Archbishop John Nienstedt (Archbishop of St. Paul / Minneapolis) talked about plans to close 21 churches in the archdiocese. “A smaller church isn’t a bad thing if the people in it are more strongly committed to Catholic principles” the Archbishop stressed, because “a shrinking church can still be influential on cultural issues.” This is what we call the “holy remnant” idea that is also very popular with Pope Benedict."Archbishop Nienstedt recently refused to give Communion to a group of college students from St. John’s University and the College of St. Benedict because they were wearing rainbow-colored buttons in support of gay rights.

I think it is deplorable to refuse communion to anyone. Ask yourself, what would Jesus do? I hope that Catholics who have had it with such heavy-handed behavior by the hierarchy will claim their power. If your parish is being closed or merged, you can join with other members of the community and CONTINUE as a Catholic Community. Find your own priest, celibate, married, or call forth a womanpriest to serve in a people-empowered, vibrant grassroots community. Think early church/house church. Hey, that's how it all began. Read Romans 16 for inspiration! Contact: www.romancatholicwomenpriests.org

"St. Mary MacKillop and the Communion of Saints by Janice Sevre-Duszynska

"We women, devoted daughters of the Church who have said “Yes” to priesthood, reject our misguided excommunication. So do the majority of Catholics and people of other faiths. Our faith and theirs teaches us to obey our conscience and disobey an unjust law.
With St. Mary MacKillop now in the Litany of Saints the good news is that excommunication could be the new fast track to sainthood! Our brother priests at the Vatican would do well to make her their patron saint, too."
[Janice Sevre-Duszynska was ordained a Roman Catholic Womanpriest in 2008.]
Posted by Bridget Mary Meehan at 9:57 PM No comments: 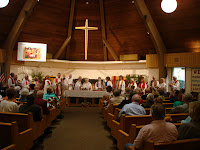 http://www.youtube.com/watch?v=HNNpgnDDHoE
(high quality, slow download)
http://www.youtube.com/watch?v=NHBWt0e4RPI
(lower quality, faster download)
In this clip, Bridget Mary Meehan presents the good news about the Roman Catholic Womenpriests Movement's growth. There are now more then 100 who serve in 23 states in the USA, in Canada, Germany, Austria, France, Scotland, and coming soon South America. Catholics flock to our ordinations to demonstrate their support.
See some photos of historic Florida ordinations and Mary Mother of Jesus Inclusive Catholic Community in Sarasota which grew from a house church setting to worshiping in St. Andrew United Church of Christ.
http://www.youtube.com/watch?v=9K5CiSXcy6Y
(higher quality, slower download)
http://www.youtube.com/watch?v=VYz1sChQjew
lower quality, faster download)
In this clip Bridget Mary Meehan, RCWP, addresses the Vatican's recent decision to label the ordination of a woman priest a crime and put it in the same category as pedophilia. She also discusses the implications of Pope Benedict's canonization of Mother Mary MacKillop, an excommunicated Australian nun on Oct. 17, 2010. One day, the institutional church may proclaim Roman Catholic Womenpriests as role models and perhaps even canonize a saintly womanpriest. Bridget Mary Meehan is a bishop serving the southern region of the Roman Catholic Womenpriests' Movement. Contact Bridget Mary at sofiabmm@aol.com,
www.romancatholicwomenpriests.org
www.godtalktv.org


http://www.youtube.com/watch?v=M5kH-vtkdVg
In this clip, you will meet some of our Roman Catholic Womenpriests serving in our Southern Region. Judy Lee, Janice Sevre -Duszynska, Eleonora Marinaro, Dena O'Callahgan and Roberta Meehan.

www.marymotherofjesus.org
Posted by Bridget Mary Meehan at 10:52 AM No comments:

http://exposureroom.com/members/jonobeirne/63cc9a4dfa6c4c6fb1cf36ff83a90c5d/
Posted by Bridget Mary Meehan at 4:20 PM No comments:

VATICAN CITY (Oct. 17) -- Pope Benedict XVI gave Australia its first saint on Sunday, canonizing a 19th century nun who was briefly excommunicated and also declaring five other saints in a Mass attended by tens of thousands of people...Benedict solemnly read out the names of the six new saints, declaring each one worthy of veneration in all the Catholic Church. "Let us be drawn by these shining examples, let us be guided by their teachings," Benedict said in his homily..."
"As a young nun, MacKillop and 47 other nuns from her order were briefly dismissed from the Roman Catholic Church in a clash with high clergy in 1871. In addition to bitter rivalries among priests, one of the catalysts for the move was that her order had exposed a pedophile priest." "Five months later, the bishop revoked his ruling from his deathbed, restoring MacKillop to her order and paving the way for her decades of work educating the poor across Australia and New Zealand."

Who knows one day, one of our Roman Catholic Womenpriests may be declared a saint by the Vatican. Can't you just see the millions around the world who will rejoice on that great day!

The good news is that , Pope Benedict by his canonization of Mother Mackillop has placed the "excommunicated" members of our church on what could be a new fast track to sainthood!

Excommunication is no longer a barrier to sainthool. The important thing to remember is that God has called us to live as radiant reflections of God's love, and sometimes that means disobeying the man-made laws of church that discriminate against others. We must always follow our conscience.


A Prayer to Saint Mother Mary Mackillop
Saint Mary Mackillop, pray for us and for all the courageous women and men who are working for justice and equality in our church Your courageous witness reminds us that no earthly power, including church authorities can separate us from Christ's love and that no bishop or pope can cancel our baptism. May we, like you, serve the people of God, especially those on the margins, who face discrimination and who are rejected by church and society. Like you, may our hearts be filled with Christ's passionate love for all as we do justice , work for a more inclusive church and walk humbly with our God. Bridget Mary Meehan, RCWP, sofiabmm@aol.com, 703-505-0004

From the Irish Times -PÁDRAIG COLLINS in Sydney

"She was excommunicated from the Catholic Church in 1871 after exposing the activities a paedophile Irish priest. She discovered that children were being abused by Fr Patrick Keating in the Kapunda parish near Adelaide in south Australia.

She told Josephites director Fr Julian Tenison-Woods about the abuse. It was then reported to the vicar general and Fr Keating was sent back to Ireland, where he continued to serve as a priest.

Fr Charles Horan, a Galway man who was a colleague of Fr Keating, swore revenge on Sr MacKillop and her order. After only four years as a nun, she was excommunicated by Adelaide’s bishop Laurence Shiel, who was originally from Wexford.

She was turned out on the street with no money and nowhere to go. Five months later, on his deathbed, Bishop Shiel instructed that Sr MacKillop be absolved and restored.

After being reinstated by the Catholic Church, Sr MacKillop became known for her work with disadvantaged children, female ex-prisoners and prostitutes."