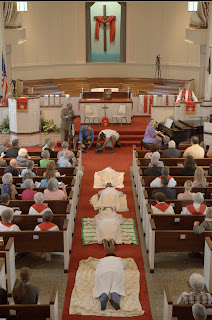 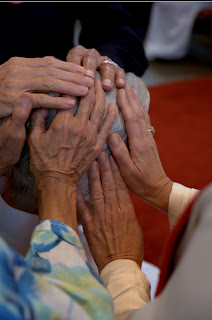 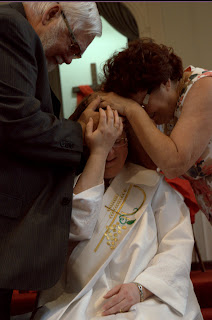 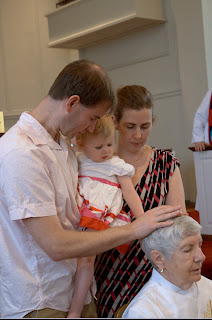 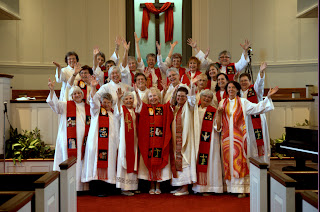 ﻿
photos courtesy of www.giuliabianchi.com
Posted by Bridget Mary Meehan at 10:07 PM No comments: 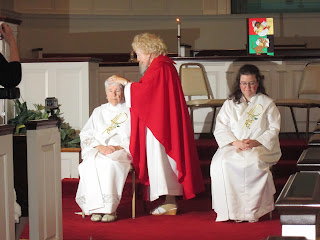 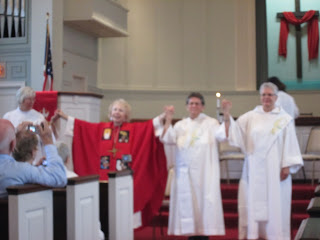 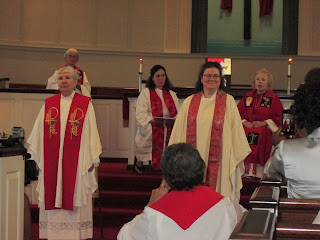 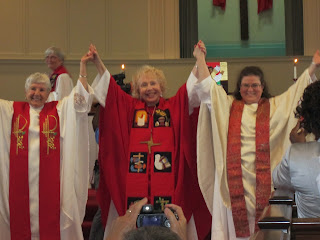 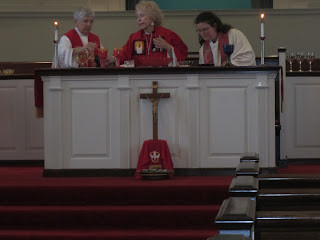 Posted by Bridget Mary Meehan at 9:25 PM No comments: 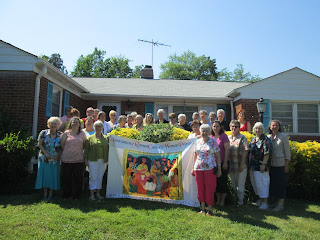 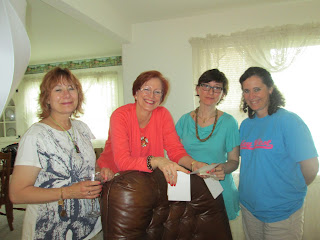 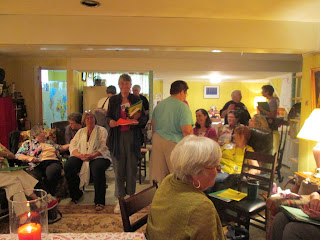 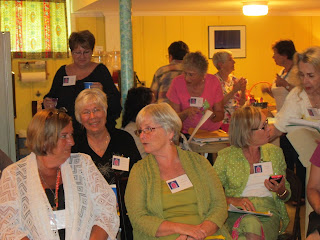 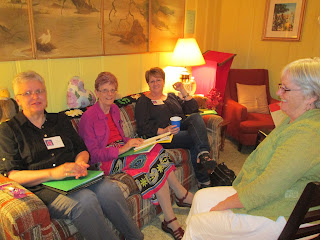 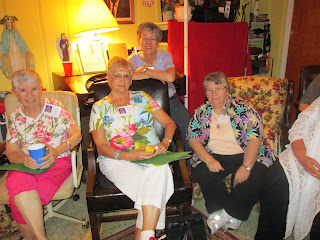 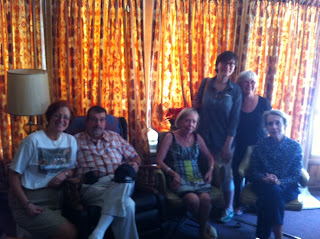 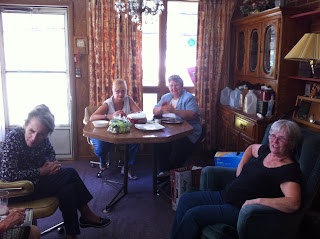 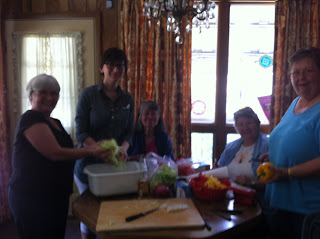 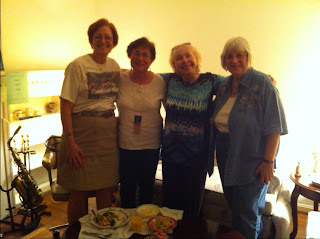 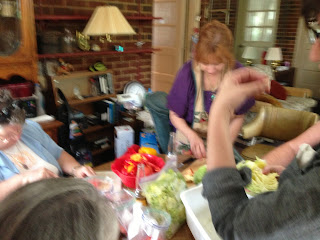 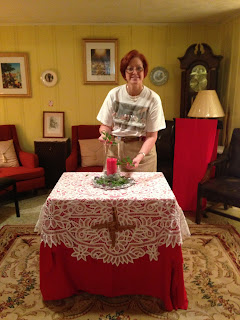 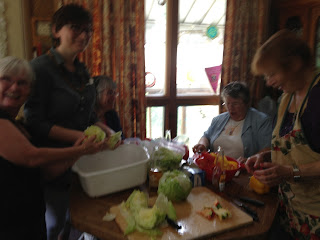 Posted by Bridget Mary Meehan at 4:13 PM No comments:

Barbara Anne Duff in GPB Macon studios. (photo:Josephine Bennett)
"A Macon woman is one of about 150 women from around the world who say they are becoming priests despite the Roman Catholic Church’s ban on women in the role.

Barbara Anne Duff will be "ordained" Saturday by Bishop Bridget Mary Meehan in Virginia. They are part of the Association of Roman Catholic Women Priests. It operates outside of official Roman Catholic Church authority because the Vatican prohibits women priests.

But the group says even though the ordinations are against Canon Law they are valid because their first bishops were ordained by a male Bishop in 2002 in apostolic succession and in communion with the Pope.

Duff says she was raised Catholic and as a child wanted to be a missionary nun. She joined the Marynoll Sisters and stayed with the order for 12 years.

Despite leaving the group, she says the calling to minister never left her. After four years of prayer Duff decided to pursue the priesthood. “I had to go through units of the sacraments. I had to read and develop my thoughts and base it on a lot of my life. I haven’t administered the sacraments, but as women we listen, we counsel and it all panned out that I was accepted into this.”

Duff says she and her group are leading the Roman Catholic Church into a new era of justice and equality for women.

According to a recent New York Times/CBS News poll seventy percent of U.S. Catholics believe that women should be allowed to be priests."
Posted by Bridget Mary Meehan at 9:14 PM No comments:

http://www.thedailybeast.com/articles/2013/06/17/a-historic-graduation-ceremony-for-orthodox-women.html
Posted by Bridget Mary Meehan at 3:39 PM No comments:

Bernadyne "Bernie" Sykora of St. Cloud, Minn., and two other women will be ordained priests at a Mass by the Roman Catholic Womenpriests of the Midwest Region on June 23 in St. Cloud.
"Bernie has been a main force behind the formation of the Mary Magdalene parish in St. Cloud," said Mary Frances Smith, who was ordained a Roman Catholic Womanpriest in 2009.
"Bernie really believes in the cause of equality for women; she's very strong in that way."
STORY: Group to ordain woman as priest in Kentucky
Posted by Bridget Mary Meehan at 1:49 PM No comments:

Five Roman Catholic Women to Be Ordained in Falls Church, Virginia on June 22, 2013:

Women Priests Invite Pope Francis to Model Gospel Partnership Like Clare and Francis
The Association of Roman Catholic Women Priests calls on Pope Francis to embrace the full equality of women in the church and world. Just as Clare and Francis were partners in living out the Gospel with the poor and marginalized, we pray and invite Pope Francis to do the same with women priests. Today, women priests continue to follow the tradition of women disciples living and preaching the Gospel taught to them by Jesus. We are leading the Roman Catholic Church into a new era of justice and equality for women. On Saturday, June 22, 2013 at 1:00 p.m. Barbara Anne Duff (Macon, GA) and Joleane Presley (Manassas, VA) will be ordained priests in the Association of Roman Catholic Women Priests (ARCWP). Mary Collingwood (Cleveland, Ohio), Marianne Smyth (Silver Springs, MD) and Mary Theresa Streck (Menands, NY) will be ordained deacons in ARCWP. The presiding bishop will be Bridget Mary Meehan of Falls Church, VA and Sarasota, FL. The ceremony will take place at First Christian Church, 6165 Leesburg Pike, Falls Church, VA 22044 www.fccfc.org (please consult for directions) All are welcome. Media are invited to interview these women by email or phone. Respectful photo taking/videos during the ceremony is acceptable. The candidates are theologically prepared and have many years of experience in ministry. Barbara Anne Duff is a former Maryknoll sister, educator, Air Force Nurse and VA Hospital Nursing Home administrator. “I am fulfilling my original call to minister to those who are on the margins of society. We women priests are working toward a renewed priestly ministry, supporting nonviolence and social justice in our church and in the world.” Joleane Presley works full time as a Senior Chaplain at a rehabilitation hospital in Maryland. She has her Masters of Divinity degree from Duke University and is trained as a chaplain. “Working with people with disabilities and meeting their spiritual needs has been a dream come true. Being ordained as a woman priest brings all of these dreams full circle. God has called me from age seven to be a priest and serve those who are hurting and ill. I believe that women who are called are making a difference in this hurting world.” Mary Collingwood, wife, mother, grandmother, educator and outreach minister, has served the church her entire adult life in diocesan offices, on parish staffs and in Catholic schools and as a board member to various non-profit agencies. Marianne T. Smyth has a Masters Degree in Counseling and four certificates from Global Ministries in Theology and Scripture. A secular Carmelite for seven years, Marianne was a caretaker for her elderly mother and worked with students with learning disabilities and who were drug/alcohol dependent. She now ministers to those facing sickness, dying and death. A former Sister of St. Joseph, Mary Theresa Streck earned an Ed.D. in Educational Leadership. She is an artist and peace activist who is co-founder and director of the Ark Community Charter School in Troy, New York, a school primarily serving low-income families. Women priests are answering the call and our movement is growing since it began in 2002 with the ordination of seven women on the Danube. There are now 150 women in our Roman Catholic Women Priests’ Movement in the world, including 100 in 30 states in the U.S. living and serving over 60 inclusive Catholic communities and welcoming all to receive the sacraments. According to a recent CBS Gallup Poll, over 70% of Catholic in the U.S. support women priests. There is no shortage of vocations as women are now saying “Yes” to this call and are being ordained. In 2013, ARCWP will have ordained 13 women priests and deacons. We have more than a dozen candidates who will soon begin preparation for ordination.
Contact:
Janice Sevre-Duszynska, D.Min, (Media) rhythmsofthedance@gmail.com, 859-684-4247
Bishop Bridget Mary Meehan, sofiabmm@aol.com, 703-505-0004
See: arcwp.org bridgetmarys.blogspot.org
Celebration of Priestly Ordination for: Barbara Anne Duff of Macon, GA, Barbara.Duff@cox.net, 478-718-0613 Joleane Presley of Manassas, VA, joprsly@gmail.com, 410-900-3998 Celebration of Ordination to the Diaconate for: Mary Collingwood of Cleveland, Ohio, mecreg6@yahoo.com, 216-408-4657 Marianne Smyth of Silver Springs, MD, mtsmyth@comcast.net, 240-444-0781 Mary Theresa Streck of Menands, NY, mtstreck@gmail.com, 518-434-2277
Posted by Bridget Mary Meehan at 1:35 PM No comments: 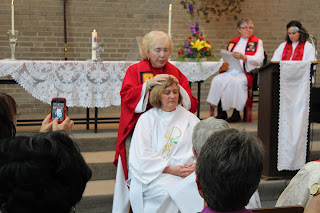 Posted by Bridget Mary Meehan at 11:34 PM No comments:

http://www.youtube.com/watch?v=7f0QoR-eIzo
KFD, the Catholic Women's Association of Germany, (representing over half a million women in Germany) held their national meeting recently and the calls for the ordination of women were loud and clear. The women turned down Cardinal Kasper's proposal for a special diaconate for women without ordination. They seem ready to fight and committed to stick to their demands. Watch this news clip from national German television (Nightly News of Channel 1 of May 30, 2013

Bridget Mary's Response:
Kudos to German Catholic Women for their call for the full equality of women in the Roman
Catholic Church! The good news is that the international Roman Catholic Women Priests Movement is alive and well in Germany, Austria, U.S. Canada and Latin America. For more information, visit www.arcwp.org
Posted by Bridget Mary Meehan at 10:34 PM No comments: