"Marybeth McBryan, a former member of the St. Louis Public Schools Board of Education and current deacon at Therese of Divine Peace, will be ordained as a Roman Catholic Womanpriest this Sunday."

Posted by Bridget Mary Meehan at 10:24 AM No comments:

Can We Talk About Religion, Please?
By Randy Cohen

"Last week the Vatican invited Anglicans who are, as The New York Times put it, “uncomfortable with female priests and openly gay bishops” to reunite with the Roman Catholic Church. If a secular institution, Wal-Mart or Microsoft, for example, made a similar offer — Tired of leadership positions being open to women and gay employees? Join us! — it would be slammed for appealing to bigotry. Some criticism was directed at the church, but it was faint. Are we right to speak softly when discussing a subject as sensitive as religion?"
Randy Cohen hits the nail on the head with this excellent article in the NY Times. Finally, someone is challenging the mainstream media's, timid response to Vatican sexism and homophobia." Right on! Would the media coddle a church that promotes racism? I doubt it.
The Vatican's outrageous, sexist, homophobic position is a scandal. But the good news is that there are women priests in the Roman Catholic Church, and we are working on the margins where we think Christ would feel right at home. Our message is inclusive and welcoming to all. Why not cover our stories?!
Does the media believe that women's equality is a human right? Does religion play a role in promoting justice and equality for all God's people? If not, why not?
Tell the whole story. There is good news. Millions of believers affirm this good news! The progressive, reformist, renewal agenda is not fading away, no matter what the Vatican does, not by a longshot!
Bridget Mary Meehan
sofiabmm@aol.com
Posted by Bridget Mary Meehan at 5:18 PM No comments:

Brief Clips of Historic Moments in Ordination of Morag Liebert: 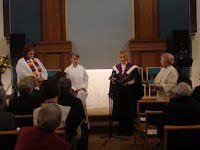 Rev. Louise Mc Clements(in black robes on) an ordained minister from the local area gave testimony to readiness of Morag Liebert for ordination.
Frances Forshaw, an Episcopalian priest in the Scottish Episcopal Church, (on left) Morag Liebert, the first woman to be ordained in UK/Scotland is in the center.
Bridget Mary Meehan is standing next to Rev. Louise.) 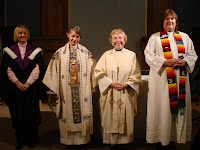 On my recent visit to Edinburgh to ordain Morag Liebert, (the first woman in Scotland, indeed in the UK to be ordained by the Roman Catholic Womenpriests Movement) I met Roman Catholics and Anglicans who expressed grave concern about Pope Benedict's decision to welcome Anglican Traditionalists into the Roman Catholic Church.

This historic ordination of Morag Liebert as a Roman Catholic Womenpriest was a great witness to the ecumenical solidarity of women across the denominational lines and a prophetic testimony to the Gospel call for justice and equality that we share as people of faith.
Instead of rejecting women priests and women bishops, the Roman Catholic Church should be ending its patriarchal practice of discrimination against women. Jesus treated women and men as equals, so should all the Christian churches, including the Roman Catholic Church. The Roman Catholic Womenpriests Movement welcomes all God's people equally to ministerial leadership. So should the Pope.
www.romancatholicwomenpriests.org
Posted by Bridget Mary Meehan at 11:43 AM 2 comments: