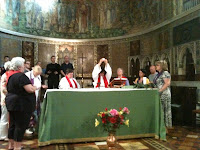 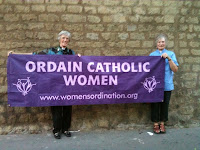 
We arrived in Roma throughout Monday and after dinner we met to plan our strategy for the week ahead- for the closing of the "Year of the Priest." I will try to capture moments that will stand out in my memory. Our company included three RCWP myself, Dagmar from Cleveland and one of the Danube Seven, and Mary Ann from New Jersey. Mary Ann and I often wore collars throughout the week. Throughout our time in Roma we attempted to dialogue with all who would engage us, focusing on the many young clerics that are easy to identify as their cassocks, collared shirts and pants were tailored and pressed immaculately. Their uniforms were perfect in detail. Comments from priests and seminarians were not supportive of women's ordination. Tuesday: We held a press conference which Bridget Mary has covered in her blog entries. After about 10 of walked to St. Peter's holding banners, posters and handing out literature as we walked. I carried a home made poster reading in English "Born Women, Called to be Priests." Our Italian translation read, "Born women to become priests" I think the Italian is more correct. The poster also contained a photo of myself in chasuble and stole. We were accompanied by about 15 reporters and camera crews to the square. Sunny and hot the streets were filled with equal numbers of tourists and priests a number in cassocks. Just prior to walking through the bicycle rack barricade we unfurled the banner and stepped onto the square. Almost immediately policeman arrived. They asked us to "fold up the banner" and proceeded to take hold of it and to roll it. They asked me to "roll up the poster" "to stop handing out literature." They asked us for documents and we provided our passports The head of Vatican security arrived, discussed the situation with the police and we were told "you must leave the square NOW.' This is a direct order so we chose to leave the square and not be arrested.

Wednesday: Today the Pope would give a homily to the audience assembled in St Peter's Square. The Pope mobile travels up and down the aisle before letting the Pope off and he walks up the stairs to the dais prepared for him. Dagmar writes "I found myself right at the edge of the lane his pope mobile took around the square. When he passed I returned his blessing by raising my hand high and blessed him by making a large sign of the cross toward him. The Pope saw it and visibly withdrew." The Women's Ordination Worldwide (WOW) women had positioned themselves across the aisle from each other for the Pope''s talk. Upon his completing his homily, the women stood up, stretched the banner "Ordain Women" across the aisle so all could see. The women were detained by the Roman police, threatened with jail, and spent two hours in the heat resolving the situation. Angelika from We are the Church-Germany spent at least one half hour showing photos to the police in order to find the photos she shot of them so it could be deleted. She discussed her family members and all events the photos covered. The police were getting very impatient in the hot sunny square. After deleting their photos the women were again expelled from the square. I had to go to a police station and carried my poster with me. In St. Peter's Square they were polite but very much authority figures. When I got to the station, the young officer read my poster, looked at the photo then at me. "You are a priest?" I told him our story and why we were in Roma. He was happy and excited for us. "Good" He left the office and returned with a number of 20 something officers who read the poster, looked at me and gave us the "thumbs up" sign. "It is time" "Good" I thanked them all for their kindness.

Thursday: The highlight of our visit for me was Our mass with Maria Vittoria in St Paul's Episcopal Church Outside the Walls. Maria was ordained on Mary 22 2010 on the Feast of St. Rita Patroness of the Impossible, Maria's patron saint. From the time she was young her father wanted Maria to become a pastor as he felt this was her calling. As we all stood at the altar to begin our liturgy with the GLBT Rainbow choir behind us, Sophia made Herself present to me through the gentle wind that gives me goose bumps. I prayed, "Welcome Sophia amongst us as we worship in your name." Her community had gathered and Sophia blessed us with Her Love and creativity and inclusiveness throughout our liturgy. After the final blessing we gathered around Maria for our blessing of her priestly ministry with the People of God. We all laid our hands upon her and asked God's blessing and wisdom for her priesthood. Later Maria phoned us and said, "When you all laid hands upon me, I felt as I did on my day of ordination. You too ordained me." We chose not to attend the Closing ceremony of the Year of the Priest. The police had been told, "Do not let the women with the banner enter the Square." We knew we would be arrested for any action then. It was time to go home.
Posted by Bridget Mary Meehan at 6:29 PM 1 comment:

http://ncronline.org/news/accountability/compromised-hierarchy-needs-relational-wisdom-women
By Charlene Spretnak
"The relational wisdom of women is desperately needed if church leaders are to demonstrate that they have truly absorbed the implications of the sexual abuse scandal and are committed to a concomitant level of change. The crisis has destroyed whatever rationalization there was for the recently reinvigorated patterns of overlooking women for high administrative positions, discouraging lay ministries, disallowing altar girls, harassing communities of nuns, and refusing to even discuss female ordination. If the church is to emerge from the crisis and enter a new day, rather than being permanently degraded and diminished by it, a vital project of renewal is needed. It would involve all Catholics -- laity, nuns and priests, including the hierarchy -- in an energetic search for creative and vital means of replacing patterns of domination and control with more cooperative ways of interacting. "

I agree with this outstanding analysis by Charlene Spretnak. The Roman Catholic Church desperately needs the wisdom and leadership of women including womenpriests if it is to move forward. The hierarchy cannot afford to continue to treat women as second class citizens. It is time to embrace the wisdom of Catholic women. Bridget Mary Meehan
Posted by Bridget Mary Meehan at 10:58 PM No comments:

"The Holy See Press Office on June 16 announced the schedule for Pope Benedict’s July 4 pastoral visit to Sulmona, a small central Italian city with 25,000 residents. Following an outdoor Mass and recitation of the Angelus, the Pontiff will address local youth and venerate the relics of two saints in the crypt of the city’s cathedral."

"St. Pamphilus, whose feast day in the current (2004) Roman Martyrology is April 28, died around the year 700 and was bishop of the nearby city of Corfinio."

"St. Peter Celestine (Celestine V), whose feast day is May 19, gained a reputation for sanctity as a hermit and was elected Pope in 1294 after a two-year conclave. He resigned five months later and was imprisoned by his successor, Pope Boniface VIII after spending several months wandering in the forest avoiding arrest. "

Some people believe that Pope Benedict should resign because of the role he played in the global sexual abuse scandal. One wonders if this visit to venerate the relics of Celestine V, a resigned pope, will be a source of inspiration during these challenging times in his papacy. It appears that Benedict has a sense of solidarity with Celestine since he declared a major celebration for the 800th birthday of this resigned pope. Bridget Mary Meehan

Posted by Bridget Mary Meehan at 10:11 PM No comments:

"Another Step Toward a Split" NO!/ Roman Catholic Womenpriests are leading the Catholic Church

Another step toward a split

The Anglican Communion is inching further toward dissolution, with Archbishop Rowan Williams' suspension of the Episcopal Church, U.S.A. because it violated a moratorium on ordaining bishops with same-sex partners with Mary Glasspool in L.A. Presiding Bishop Katharine Jefferts Schori responded with a strongly worded rejection of the action, all but accusing Williams and conservatives in the Anglican Communion of ecclesiastical imperialism.

Posted by Bridget Mary Meehan at 11:03 AM No comments:

"Mary Kay Kusner was raised as a quite traditional Roman Catholic.
On Sunday, she was ordained as a priest — a role for women that is anything but traditional in the Catholic Church.
Kusner’s ordination was made possible by the Roman Catholic Womenpriests organization, a group loyal to the church in its teachings and rituals but denounced by the church for its belief that women, too, can be priests.
“We’re growing very quickly, and the people are accepting us,” Roman Catholic Woman Bishop, Bridget Mary Meehan said..."