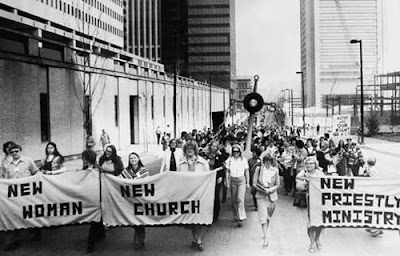 October 30, 2018
Women-Church Convergence to Catholic Hierarchy: “No More Abuse!”
We, the undersigned members of Women-Church Convergence, a coalition of 28 feminist groups rooted in the Catholic tradition, say to the Catholic hierarchy and leadership throughout the world, “No More Abuse!”
Survivors of sexual, physical, emotional, and spiritual abuse perpetrated by those representing the Roman Catholic institution are scarred for life. The cover-up by the Vatican and its cardinals is in total opposition to the teaching of Jesus and the Gospel. The Catholic community is facing a pastoral emergency of epic proportions!
We are horrified and disgusted by the well-catalogued accounts of priest pedophilia, abuse of vulnerable adults, bishops forcing seminarians and other priests to engage in sex as a condition of employment, bishops covering up crimes, and the former nuncio’s depiction of dueling factions among clerical higher-ups. We are shocked that bishops continued the abominable practice of moving priest perpetrators to different parishes and did not report the abuse as crimes to legal authorities.
What drives these disgraced Catholic clerics to put their own power and reputation above the safety of its most vulnerable members: children, women, and the non-ordained? It is patriarchy pure and simple, the mistaken notion that a few men, in this case allegedly but not necessarily celibate men, have the right to control what ought to be a democratic institution. That time is over.
Enough is more than enough! Clerical privilege and episcopal rule by incompetent and sometimes criminal cardinals, bishops, and priests must end.
We begin by calling for these concrete next steps with many more to follow:
Finally, we acknowledge the pain and suffering of survivors, and we pray:
For survivors, their families, and loved ones whose lives have been irrevocably damaged, including those whose lives ended in suicide.
For Catholic clergy and others who live with their crimes of omission and commission.
For ecclesial communities, including Women-church and intentional Eucharistic communities, which are modeling new ways of being Catholic and church.
We pledge our energies and resources not to cleaning up a mess that is not of our making, but to living new, democratic, egalitarian forms of church that are open to all.
####
Signed:
A Critical Mass: Women Celebrating Eucharist
Association of Roman Catholic Women Priests
Catholic Network for Women’s Equality
Catholics for Choice Canada
Chicago Women-Church
Con-spirando
DignityUSA
Greater Cincinnati Women-Church
Loretto Women’s Network
Louisville Women-Church
Mary’s Pence
National Coalition of American Nuns
Roman Catholic Womenpriests
San Francisco Bay Area Women-Church
SC Peace and Justice
Sisters Against Sexism
Southern California Women-Church
Southeastern Pennsylvania-Women’s Ordination Conference (SEPAWOC)
Women Church of Central New Jersey
Women Church of the Wabash Valley
Women-Church Baltimore
WomenChurchBoulder
Women’s Alliance for Theology Ethics and Ritual (WATER)
Posted by Bridget Mary Meehan at 5:56 PM No comments:

Final thoughts The phoenix rises; Paragraph 3 and LGBT; Women movers and shakers by

Posted by Bridget Mary Meehan at 1:16 PM No comments: