The author, Michael Paulson, wrote two articles about our ordinations in Boston on July 18, 2008 and July21, 2008.
Michael Paulson, in 2002, broke the story of sex abuse the Boston Archdiocese.
Posted by Bridget Mary Meehan at 4:02 PM No comments:

Roman Catholic Womenpriests call on Pope Benedict to lift the decree of automatic excommunication issued on May 29, 2008 against all in our movement as a gesture of reconciliation and justice toward women in the church. As is well known, the Congregation for Bishops, instructed by the Pope, removed the excommunication of four traditionist bishops on Jan. 21, 2009.
Therefore, Roman Catholic Womenpriests call on the Pope to lift the decree of excommunication against us. This gesture will be a step away from the institutional church’s treatment of women as second-class citizens. We stand firmly in the tradition of Vatican ll which declares:
"Any kind of social or cultural discrimination in basic personal rights on the grounds of sex, race, color, social conditions, language or religion, must be curbed and eradicated as incompatible with God's design." Gaudium et Spes, art. 29, 2
No priest pedophiles have been excommunicated.No bishops who were responsible for their continued placement in parishes after their pedophile history was known have been excommunicated.
Theologians who teach and support Vatican II teachings and who support women's ordination are silenced and/or excommunicated.
Women ordained as priests are excommunicated.
Priests and laity who support women priests are excommunicated.
But, priests who reject Vatican II and who deny the holocaust and who openly deny the full equality of women are "rehabilitated" after earlier excommunication.
What's wrong with this picture?
*Bishop Williamson, who denies that holocaust happened, was one of four bishops, who rejected Vatican ll, who were recently re-admitted to the Roman Catholic Church. In this article he writes about girls going to the university:
"Almost No Girl Should Go to University"
http://www.sspx.ca/Documents/Bishop-Williamson/September1-2001.htm
Response Regarding Excommunication Decree
Roman Catholic Womenpriests reject the penalty of excommunication issued by the Vatican Congregation for the Doctrine of Faith on May 29, 2008 stating that the “women priests and the bishops who ordain them would be excommunicated latae sententiae.” Roman Catholic Womenpriests are loyal members of the church who stand in the prophetic tradition of holy obedience to the Spirit’s call to change an unjust law that discriminates against women. Our movement is receiving enthusiastic responses on the local, national and international level. We will continue to serve our beloved church in a renewed priestly ministry that welcomes all to celebrate the sacraments in inclusive, Christ-centered, Spirit-empowered communities wherever we are called.
The Vatican confirmed the excommunication of the Danube 7 with a decree in Dec. 2002. The Roman Catholic Womenpriests initiative began on June 29, 2002 with the ordination of seven women on the Danube River. Read our new book , Women Find a Way, to find our more about the history of the movement and stories of some of the women in Roman Catholic Womenpriests. Visit www.romancatholicwomenpriests.org
Posted by Bridget Mary Meehan at 4:55 PM 1 comment: 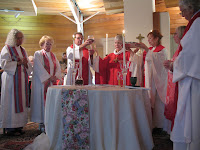 Vatican Justice" by Bill Frogameni
makes a contrast between priests who molest children who are protected by Catholic hierarchy and priests who support womenpriests.
Article highlights Roy Bourgeois who stood with " trailblazers of the female ordination movement in Lexington KY. to make Janice Sevre-Duszynska a Catholic priest."
This article quotes Sr. Mary Ann Walsh, spokesoman for th e U.S. Conference of Catholic Bishops. "The church believes that the intent of Jesus ' founding of the priesthood is that it was reserved for men," explained Sister Mary Anne Walsh spokeswoman for the U.S. Conference of Catholic Bishops.
But speaking for the group Roman Catholic Womenpriests, Bridget Mary Meehan, herself ordained in 2006, and subsequently excommunicated, disputes that teaching:
Jesus never ordained anyone." says Meehan. "And in the tradition, women were ordained deacons, priests and bishops for the first 1200 years." p. 18.
Posted by Bridget Mary Meehan at 10:15 PM 1 comment:

To Pope Benedict: Be Catholic!
The latest move by Pope Benedict XVI to reinstate four schismatic bishops of the St. Pius X Society—which rejects the liberalizing decrees of Vatican Council II (1962-65)—is shocking as it negatively highlights the millions of Catholics he apparently is not interested in reaching out to, including the millions deprived of the Eucharist because of the medieval law requiring that only celibate males can be priests.
Last spring the Pew Foundation found that there are currently 65 million American Catholics—and 30 million former American Catholics! These latter are not Vatican II rejectionists like the Traditionalists, but most likely are either Catholics who are deeply disappointed at the anti-Vatican II Restorationism of Popes John Paul II and Benedict XVI, or never really learned about the Freedom Spirit of Vatican II in the parched years after the appointment of Cardinal Wotyla as Pope in late 1978.
We of the Association for the Rights of Catholics in the Church (ARCC, founded in 1980 in the wake of the Vatican repression of Catholic thinkers in 1979) welcome the reaching out to the few million Traditionalist Catholics.
We also cry out for a reaching out to the 30 million alienated former American Catholics! (How many more millions of former Catholics are there elsewhere in the world!?) We also look for a reaching out to the untold millions of the 65 million current American Catholics who are barely holding on to their church membership by their fingernails, threatening to swell the ranks of the 30 missing millions.
Personally, I also plead with my former colleague on the Catholic Theological Faculty of the University of Tübingen, Professor Joseph Ratzinger, now Pope Benedict, to reach out not only to the right, but also to the left. Make our Church truly catholic, universal!
Professor Leonard Swidler, Ph.D., S.T.L.
President, Association for the Rights of Catholics in the Church
E-mail: dialogue@temple.edu ; Tel: 513-508-1935
Web: arcc-catholic-rights.net