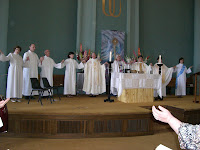 "I would really like to stick around and make a difference, even if it’s just a little move in the right direction and change this church that I love,” she said.
Posted by Bridget Mary Meehan at 3:49 PM No comments:

Prominent theologian Edward Schillebeeckx, O.P. in his book: Ministry: Leadership in the Church of Jesus Christ stated: "Against the background of the existing church order then, new and sometimes urgently required alternative possibilities are often only to be seen through the medium of what is bound to be regarded as, at least temporarily, illegal. This is not a new phenomenon in the church - it has always been the case.
Renewal in the church usually begins with illegal deviations and it rarely happens that attempts at renewal come from above.
It is not possible to ask the highest authority in a world church to change the prevailing order in that church if the change does not meet with the approval of the majority of Christian communities."


This insight affirms the Roman Catholic Womenpriests movement which is offering a renewed model of priestly ministry in the church, rooted in Jesus example of Gospel equality. For Jesus women and men are equals. At the Last Supper, Jesus addressed his mandate: "Do this in memory of me" to women and men, therefore empowering women to preside at Eucharist, which they did in the house churches in the early centuries of the church's history.
Roman Catholic Womenpriests remind us that women are equal images of God and are called to preside at sacramental celebrations and to be partners n all areas of governance in the church. Roman Catholic Womenpriests are moving from a top-down approach to a more open, inclusive, participatory model in union with the people with whom we serve. We are charting a new path of renewal for priestly ministry an emerging model of renewal for priesthood and church. No wonder the Vatican including some of our bishops are threatened! We must be patient as the Spirit will prevail. She always does!
Bridget Mary Meehan, rcwp
Posted by Bridget Mary Meehan at 9:21 PM No comments:

Recommended Reading
Francis Sullivan, S.J. from his Magisterium: The Teaching Authority of the Church:

"Before the pope can define a dogma, he must listen to the church and he can define as dogma only what he finds in the faith of the church. The pope has no source of revelation that is independent of the faith-life of the church...From this, it follows that the pope cannot simply define a dogma without having, in some real way, consulted the faith of the church, for he can define only something that has been handed on in the teaching, life, and worship of the church.
... It is unjust to treat all dissent from the teaching of the ordinary magisterium as disobedience, or to turn agreement with his teaching as a test of loyalty to the Holy See. No doubt, there are Catholics who respect for the teaching authority of the pope is so great that the simple appeal to his formal authority is enough to convince them that the teaching must be true...but such persons should resist the temptation to think disloyal other Catholics in whose minds the reasons against the teaching make so strong an impression that the formal authority of the magisterium is not enough to overcome their doubts.
If, in a particular instance, Catholics have offered their religious submission of mind and will to the authority of the magisterium by making an honest and sustained effort to achieve internal assent to its teaching and still find that doubts about its truth remain so strong in their minds that they cannot actually give their sincere intellectual assent to it, I do not see how one could judge such non-assent to involve any lack of obedience to the magisterium."
Fr. Sullivan's book was used commonly in U.S. seminaries and reflects the importance of loyal dissent in the Catholic Church. This is vital to understand the reason why Catholics can dissent from papal teaching and remain faithful members of the church.

Richard McCormick, S.J. specified four criteria for "responsible" dissent:
1. A sincere effort to understand the teaching (of the church)
2. Consideration of the reasons for the teaching and those against (it)
3. Serious examination of one's conscience
4. Holding respect for the general trustworthiness of the church.
See excellent website: Women Priests: http://www.womenpriests.org/teach_ac.asp for discussion of "infallibility" as it fails to meet the test in reference to Magisterium's teaching on women's ordination.
The main reason is that neither Popes Paul Vl or John Paul ll consulted the "universal ordinary magisterium", the teaching of all the Catholic bishops in the world. See my comments below:
In the case of women's ordination. Pope John Paul 11 in "Ordinatio Sacerdotalis" declared "That women cannot be ordained priests has been set forth infallibly by the ordinary and universal magisterium" on May 22, 1994. However the pope did not consult the faithful including the world's bishops and theologians. The majority of theologians have rejected this teaching.In order for a teaching to be infallible, it must be declared by the combined teaching of all the Catholic bishops in the world.
Since the majority of the world's Catholics reject this teaching including most theologians, the Vatican's prohibition against women's ordination is not authoritative and contradicts Jesus's example of Gospel equality, the early church tradition, and the Vatican's own scholarship. In the Gospels, Jesus treated women and men as equals. Paul commended deacon Phoebe and called Junia an outstanding apostle and co-worker in Romans 16. Historical evidence demonstrates that women were ordained deacons, priests and bishops during the first twelve hundred years of the church's history. Some popes, like Gelaius, who wrote a papal bull asking the bishops of southern Italy to discontinue the practice of allowing women to preside at Eucharist and bishops, like Atto of Vercelli, who acknowledged that the priestly ministry of women in the early church was a response to the great need. In 1975, a report of the Pontifical Biblical Commission (the Vatican's own scholars) concluded that the ordination of women could NOT be excluded on the basis of Scriptures. Thus, the Sacred Congregation for the Doctrine of the Faith and the pope have not established infallible teaching by the ordinary universal magisterium on women priests.
Bridget Mary Meehan , rcwp
sofiabmm@aol.com
www.romancatholicwomenpriests.org
Posted by Bridget Mary Meehan at 10:04 AM No comments:

A few of the questions asked of the nuns by the Vatican Investigators:

2H. What is the process for responding to sisters
who disagree publicly or privately
with congregational decisions,
especially regarding matters of Church authority?
(Note the “especially.”)

3C. How do your initial and on-going formation programs
integrate the most recent documents of the Church
concerning religious life?
(And they are?)

4C. Are daily Mass and frequent reception of the Sacrament of Penance
a priority for your sisters?
(Frequent penance is needed for such sinners.)

4D. Do the sisters of your institute participate
in Eucharistic Liturgy according to approved liturgical norms?
(Stifle the Creativity, Sisters.)

4G. How does the manner of dress of your sisters . . .
bear witness to the dignity and simplicity of your vocation?
(Where’s the habits?)
Posted by Bridget Mary Meehan at 10:00 PM No comments: 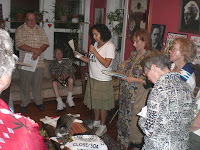 Roman Catholic Womenpriests are rooted in Jesus' example of Gospel equality. Women priests remind us that women are equal images of God. We are leading the church into an era of full equality, equal partnership and sacramental ministry in a renewed priestly ministry in a community of equals now. As theologian Sandra Schneiders said: "Jesus and his itinerant band of ministerial disciples wore no special clothes and had no fixed abode. He brought down the murderous ire of the hierarchy of his own religious tradition because, among other things, he related to women as equals and involved them along with men in his ministry; he reached out to the "disordered" and marginalized in his society, laid healing hands on the suffering, conversed with and allowed himself to be challenged and changed by people outside his own religious tradition, refused to condemn anyone, however "sinful," except religious hypocrites burdening people with obligations beyond their strength." (Essay 8/21/09 reprinted in Courage: Newsletter of Loretta Women's Network) 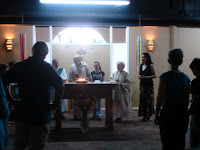 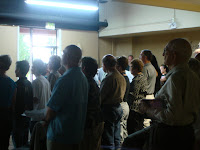 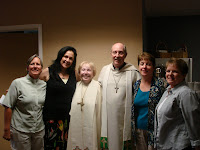 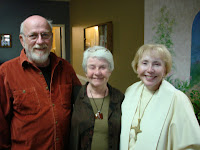 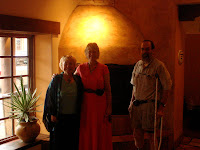 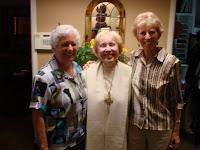 On Sat. Sept. 5, 2009, I had the honor being the guest homilist and co-celebrating a Celtic liturgy with Fr. Scott Jenkins and the Ecumenical Catholic Communion at Church of the Holy Family in Aurora, Colorado. I shared my story and our RCWP story with the regional council and members of this wonderful, inclusive Catholic community in Longmont and in Aurora. We had a great discussion. I see many similarities between RCWP and ECC as we live emerging models of inclusive ecclesial, grassroots communities rooted in Jesus' example of Gospel equality. I was blessed by our dialogue and by meeting so many faith-filled companions on the journey. I am grateful for the warm hospitality of Sheila and Peter Dierks who hosted me in their home in Boulder, Colorado. Sheila and I co-edited two books on Eucharistic Prayers, Eucharistic Prayers for Inclusive Communities, Vol.1 and Vol.2). She will be ordained a priest in the ECC in less than two weeks. Congratulations and blessings to you, Sheila! You have inspired me by your vision of house churches and your gifts for building community. It was a great joy to visit with my friends, Sharon Friedman, a member of the ECC, and her husband, Paul Imsee. Both Sharon and Paul have been long-time supporters of my GodTalk Ministry. Paul did the legal work to set up our non, profit, GodTalk Foundation.
www.godtalktv.org

www.romancatholicwomenpriests.org
Posted by Bridget Mary Meehan at 12:41 PM No comments: