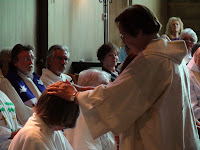 Joan Houk on left, on right, Bishop Ida Raming laying on of hands at bishops ordinations on April 19, 2009 in California.

Thank you for publishing the article about the Vatican's investigation of U.S. religious sisters ("Vatican Inquiries Into Sisters Causing Trepidation," July 3). Being a Catholic today has much in common with being in an abusive marriage. Do you stick it out and work for change, or do you leave? Many have left, and those who have stayed are being "investigated."

People in an abusive marriage can go to counseling. The counselor creates a safe place to discuss differences. Some abusive spouses will not go to counseling, and neither will the official church.

There is no safe forum for discussing the ordination of women, which many believe is the key issue behind the Vatican's move. The official church has a three-step monologue process for those who disagree: (1) write official documents telling people what to believe, (2) failing to convince, apply sanctions, and (3) when people will not be silenced, tell them that they have "placed themselves outside the church."

If Catholics speak out about the ordination of women, they risk being removed from their religious communities, their ministries or their jobs, which can mean loss of financial supports and benefits.

I speak about this from the inside having been told in public print that I have put myself out of the church. No personal letter, no phone call, no counseling, no discussion, no dialogue, just "out"; however, I will not be abused, and I will not leave my church. The result of my taking this stand is that I have found myself in the best of company.

JOAN CLARK HOUK
McCandless
The writer was among women ordained by Roman Catholic Womenpriests in July 2006.

Gary Macy, scholar and church historian cites that the present Vatican investigation of apostolic religious orders in the United States is not in continuity with the first twelve hundred years of the church's history.
For example:

"Early abbesses were powerful and acted independently not only of the papacy, but also of the local bishop. In fact, the most impressive example is the powerful Cistercian abbess of Las Huelgas near Burgos in Spain who wore her miter and carried her crosier until she was finally forbidden to do so in 1873. The abbess had the power to appoint parish priests for the countryside subject to the convent of Las Huelgas, some 64 villages. No bishop or delegate from the Holy See could perform a visitation of the churches or altars or curates or clerics or benefices under the care of the abbess. The abbess of Las Huelgas was even able to convene synods in her diocese and to make synodal constitutions and laws for both her religious and lay subjects."

In addition, Gary Macy, in his book, The Hidden History of Women's Ordination, points out that for the first twelve hundred years of the church's history, women were ordained.
It is time to reclaim our ancient heritage of women as equals and partners in the church both in Holy Orders and in religious life. It is my hope that many nuns, especially those with vocations to priestly ministry in a renewed church, will make these connections and together with Roman Catholic Womenpriests be agents of transformation, bringing justice and equality to our church.
St. Mary of Magdala, Phoebe, Prisca, Aquila, Lydia, Brigit of Kildare, Clare of Assisi and all you holy women and men who have before us as prophetic witnesses, pray for us.
Bridget Mary Meehan

Posted by Bridget Mary Meehan at 7:42 PM No comments:

Women in Ministry with St. Paul focus of over 200 international Mary Magdala Celebrations:
Organizers Request Vatican to Restore Deleted Women Leaders in Lectionary
CLEVELAND, OH: In mid-July, organizers across the US and in Canada, Great Britain, Australia and Uganda will join together in a worldwide effort to expand awareness of women leaders in the early Church, especially Mary of Magdala, Phoebe, Prisca, Lydia and other little known women leaders who ministered with f St. Paul.

The Vatican designated this past year as the Year of St. Paul and invited Catholics to more fully reflect on his important role in the church. FutureChurch's Mary of Magdala this year will celebrate the often unnoticed women who ministered alongside of St. Paul. Participants will also be asked to send postcards to Vatican leaders asking them to include the missing stories of biblical women leaders.

"Many people mistakenly believe St. Paul was anti-women," Said FutureChurch Director Sr. Christine Schenk, Yet, as Pope Benedict himself has said so well, St. Paul worked closely with women leaders such as Phoebe, Junia, Lydia and Prisca (papal address February 14, 2007). Unfortunately, Romans 16, a passage that names eleven women and identifies some of them as deacons, apostles, and co-workers, is never proclaimed on a Sunday. Nor are the accounts of women leaders in the Acts of the Apostles (Lydia, Prisca, Tabitha), which are read only on the weekdays of Easter, so most Catholics never hear about their important ministry alongside Paul. (For more information, see "Women in the Bible and Lectionary" by Ruth Fox OSB, published in 1996 by Liturgy 90)

"St. Mary of Magdala was a foremost leader in the early Church, led the group of women who accompanied Jesus at his death, and first proclaimed the good news of his resurrection. She was not a prostitute as some believe. For centuries Mary of Magdala's story, like those of the women leaders in the ministry of St. Paul, has been minimized or excised from the official lectionary used in both Catholic and Protestant churches," said Sr. Christine Schenk of FutureChurch.

For the past two years, FutureChurch spearheaded a campaign to "put women back in the biblical picture" at last October's Synod on the Word. For the first time in history Catholic bishops meeting in a synod "recognized and encouraged" the ministry of women of the Word, discussed the need to restore women's stories to the Lectionary, and invited the greatest number of women ever to participate as auditors and biblical experts.

Although the synod is over, the work to open an examination of the Lectionary as recommended by Synod Proposal 16 is not done. Participants at Mary of Magdala celebrations across the nation will be sending paper and electronic postcards to Cardinal Antionia Cañizares Llovera, Prefect for the Congregation for Divine Worship encouraging him and the synod committee to follow through on this proposal. Specifically, the postcards ask to:

· Open an examination of the Lectionary to "see if the actual selection and ordering of the readings are truly adequate to the mission of the Church in this historic moment," as recommended by Synod Proposal 16.

· Restore women leaders such as Phoebe (Romans 16) and Lois and Eunice (2 Tim 1:4, 5) to Lectionary texts from which they have been deleted.

· Include stories about other women leaders such as Shiprah and Puah, the midwives who saved a nation of Hebrew boy-children, perhaps even Moses.

· Convene a gender-balanced group of biblical scholars and liturgists to decide which women's stories would be most fruitful for prayer, preaching and catechesis if added to the Lectionary.

"We think it's important for women and men to learn the contemporary scholarship about women in the early Church and we are especially happy to have a celebration in which women can preside and preach at worship," said Mary Louise Hartman of Princeton, New Jersey, FutureChurch Board member

To educate about women leaders and to model gender balance in scripture proclamation, FutureChurch began special international celebrations of the Feast of St. Mary of Magdala in 1998. Each year nearly 300 such events are held in mid July. Participants hear presentations by biblical scholars about early women leaders and experience prayer services at which competently prepared women preach and preside.

"One of the reasons the Mary of Magdala celebrations have proved so enduring is that Catholic women and men are edified to discover that Jesus included women in his Galilean discipleship. Most Catholics mistakenly believe that Jesus called only men, when in fact Luke 8:1-3 tells us Mary of Magdala, Joanna, Susanna and many other women accompanied him in Galilee. Since the Lukan reading is never read on a Sunday, the stories of Jesus' women disciples are rarely if ever the subject of homiletic attention," says Chris Schenk, FutureChurch Executive Director.

For each of the past thirteen years FutureChurch spearheaded between 200 and 300 special celebrations of the July 22 Feast of St. Mary of Magdala in the U.S. and worldwide. The prayer services always highlight biblical women leaders and women's leadership in the Church. They will engage between 30 and 300 people in parishes, convents, Catholic schools, Protestant churches, private homes and small faith communities.

Sample electronic postcards and a list of celebrations nationwide are available at www.futurechurch.org