http://cowansville.enregion.ca/
Posted by Bridget Mary Meehan at 7:37 PM No comments:

Janice Sevre-Duszynska: "Serving the Ministry of Irritation "by Gregory Flannery 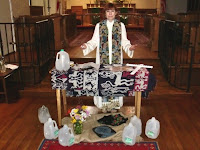 "The issue of women’s ordination isn’t Sevre-Duszynska’s only criticism of the contemporary Catholic Church.
“It’s not just adding women and stirring,” she says. “We’re worker priests. We’re about reforming and transforming.”
She believes the church has strayed from its founder’s mission, reflected in the absence of people whom, she says, Jesus would welcome.
“Where are women?” she says. “Where are homosexuals? Where are street people? The God of Jesus is full of compassion, walking with us, a fierce defender of the poor and marginalized.”
Posted by Bridget Mary Meehan at 5:43 PM No comments:

http://www.americamagazine.org/content/article.cfm?article_id=12496
"The news that a soon-to-be-saint had once been excommunicated for her order’s part in urging the church to act against an accused sex offender is a reminder of the virulence and long history of crimes of abuse by members of the Catholic clergy."
"...But the fuller story is that Mother Mary MacKillop was excommunicated partially out of revenge for her order’s part in pointing to a case of abuse by a Father Keating. ..

"What might this episode mean for contemporary Catholics? First, it is no surprise that a saint found herself at odds with the church hierarchy. Joan of Arc, to take an extreme example, was burned at the stake in 1431 after being convicted of heresy by an English ecclesiastical court. Thomas Aquinas found his own writings under censure in the 13th century. The most recently canonized American saint, Mother Theodore Guérin, the independent-minded founder of the Sisters of Providence of St.-Mary-of-the-Woods, was instructed in 1847 by the bishop of Vincennes, Ind., to resign from her religious order. (The bishop was later removed from his post by the Vatican.)"
..."The prophet faces dismissive attitudes, hostile denials or, as in the case of Blessed Mary MacKillop and the Josephite Sisters, outright punishment. Only recently has the church begun to see whistleblowers in its own ranks as necessary—and sometimes holy.And what is more heroic than standing up for a victim when advocacy costs you membership in the church that you love?
Like all saints, she is a model for all Catholics. But at this time, abuse victims and their families especially need all the help they can get—from heaven as on earth."

Bridget Mary's Reflection:
Let us praise God for courageous women like Mother Mary Mackillop, who will be canonized a saint on Oct. 17th, 2010 by Pope Benedict. She is the patron saint of Survivors of Sexual Abuse and of Advocates for Justice for Survivors of Clergy Sexual Abuse in our Church. St. Mary Mackillop, pray for us that we may all work together for justice and equality for all especially for victims of clerghy sexual abuse and for all those who are marginalized and ostracized in our church.

Posted by Bridget Mary Meehan at 8:59 PM No comments:

"Linda Spear, originally from Winnipeg, became the sixth woman in Canada to defy Rome and become unofficially ordained, and just like the five women before her, Spear now faces excommunication..."

"...She said she will perform the sacraments — such as baptism, marriage and confession — even though they won't be recognized by the Vatican, which limits the priesthood to men..."

Posted by Bridget Mary Meehan at 12:31 PM No comments:

"The Case of the Pope" by Juliette Hughes/Sydney Morning Herald

..."Recognition of the as a state has privileged Roman Catholicism over all other religions but ordinary people have not benefited."

"...The has exploited its position not only to hamper the UN's contraceptive programs and the use of condoms against AIDS in but also to indulge in money laundering and other activities that subvert the laws of countries where its adherents live. The most egregious of these transgressions has been the 's refusal to respect the anti-paedophile laws of other countries. It developed a culture of concealing crimes and a widespread practice of transferring criminal clerics from place to place to commit more."

"There have been whistleblowers, but they were often ostracised, even excommunicated (as with Mary MacKillop)..."

"...What the current Pope does not seem to get is that no expressions of personal anguish over the abuses committed on his watch can substitute for what is needed: an acknowledgement that he and many bishops covered up crimes — and a commitment to change...."

Juliette Hughes is a practising Catholic.

Bridget Mary's Reflection:
Two thoughts:
1) Pope Benedict will canonize Mother Mary MacKillop, an excommunicated nun. Perhaps, this pope is offering hope to the many thousands of Catholics who have been excommunicated, including women priests. Excommunication is not a barrier to canonization.

2) We should ask ourselves what other religion would get away with acting like a crime family- transferring criminals from place to place in violation of civil law as this article points out!
It is ironic that Roman Catholic Womenpriests who love the church and are serving the people of God in grassroots in inclusive communities are excommunicated. The Vatican categorizes our ordinations as "crimes"; yet the Pope has not excommunicated the pedophiles nor has he punished the bishops who have kept clergy abusers in ministry or transferred them from place to place . Something is wrong with this picture!

Posted by Bridget Mary Meehan at 9:17 PM No comments:

Engendering a firestorm of criticism, their new canonical guidelines for handling and punishing the most "grave crimes" in church law revealed just how enraged the hierarchy is at women who dare to challenge them. Along with the crimes of sexually molesting children and developmentally disabled adults, and of using and distributing pornography, the Vatican listed: "the attempted sacred ordination of a woman."

"In other words, the two greatest problems the Catholic hierarchy faces are women and children..."
"In reality, this action is yet another desperate response by the Catholic hierarchy to the small but highly visible movement by Catholic women -- sisters and lay women -- to defy the church's ban on women's ordination. .."
Posted by Bridget Mary Meehan at 9:05 PM No comments:

..."The group Roman Catholic Womenpriests ordained Linda Spear, a retired teacher from Quebec, in an Anglican church in Sutton..."

"Spear is the first Quebecer but the sixth Canadian woman to become a Catholic priest this way. She was symbolically ordained by U.S. bishop Andrea Johnson. Spear can celebrate the sacraments such as marriage, but they will not be recognized by the Vatican, which limits the priesthood to men."

"We are not leaving the church, we are leading it into living Jesus's example of Gospel equality. Jesus called men and women to be disciples," Meehan said.

"We are disobeying an unjust church law that prohibits women's ordination and is rooted in discrimination," she explained. .."

http://www.montrealgazette.com/life/Quebec+female+Catholic+priest+ordained/3649972/story.html#ixzz11yN5qCX3
Posted by Bridget Mary Meehan at 12:06 PM No comments: