Benedictines Chittister and Forcades delve into women's role in church

Benedictine Sr. Teresa Forcades, left, talks with Benedictine Sr. Joan Chittister at the Women's Ordination Conference's Oct. 11 event, "Radicals and the Rule," in Washington, D.C. (Women's Ordination Conference / Anna Romanovsky)
WASHINGTON — Memory was at the core of an Oct. 11 exchange between two prominent Benedictine sisters both known as radical thinkers in their circles — Sr. Joan Chittister, 83, and Sr. Teresa Forcades, 53 — at All Souls Church Unitarian in Washington, D.C., for a fundraising event hosted by the Women's Ordination Conference titled "Radicals and the Rule."
As a young scientist in the early 1990s, Forcades was taught that DNA's three-dimensional double-helix structure is called the "Watson and Crick model" for the two men who apparently discovered it: "That's James Watson and Francis Crick, two names."
Forcades later learned it was actually a woman, Rosalind Franklin, who discovered the shape of DNA in the 1950s, years before Watson and Crick. But Franklin's name — a woman's name — was left off the model's official title.
NEW: GSR in the Classroom is a supplementary curriculum that adapts GSR articles for use in Catholic middle and high schools and faith formation programs. Learn more.
"In 30 years, the science had forgotten her," said Forcades, a Catalan physician and theologian known for her public health social activism and views on feminist theology.
The Catholic Church, by contrast, has preserved the memory and history of women going back thousands of years in a way that "no other institution has done," Forcades said. In China, for example, where is the history of women from, say, the 12th century? Who are these women? Of course, women in Eastern cultures had important social initiatives, Forcades said, but their records have disappeared.
The church is struggling to move forward to address the oppression of women, Forcades acknowledged. Nevertheless, "every day, the church is placing in front of my eyes [an example of] a woman that is highly honorable —"
Chittister jumped in before Forcades could finish the thought.
"Maybe you're being bought off," Chittister said.
"Bought off?" Forcades asked.
"Maybe it's one of the cleverest sexist tricks," Chittister said, then shared a story, and memory, of her own.
As an 8-year-old in Catholic school, Chittister used to go to the nearby church every night after school and stand in front of its stained-glass windows, "looking for a woman."
"Here is an institution that has preserved great women for over 2,000 years — the kind that created you and me, the kind that gave us a model that there was another place to go and another way to think," Chittister said.
"But at the same time, I have to ask: Why is it that the institution that has saved the memory, the work, of the strongest women in history for 2,000 years is not the church that recognizes this membership of these women?" she asked.
'The ideal of human life is sanctity, and that has always been open to women.'
—Sr. Teresa Forcades
Tweet this
The two sisters, who had not met before this event, wasted no time diving into the complex subject.
"Modernity began with the exclusion of women," Forcades said.
In "modernity" — the phrase she used to describe the post-Renaissance period of history that continues to this day — human reason was made out to be the highest "ideal of human life." From modernity's outset, Forcades said, women were excluded from pursuing this ideal because they were barred from receiving an education and attending university.
While reason is the ultimate ideal for secular society, Forcades made clear that the church has never said that the ideal of human life is the priesthood, which only men are allowed to attain.
"The ideal of human life is sanctity, and that has always been open to women," Forcades said, though she also mentioned she supports the Women's Ordination Conference and will continue to advocate for women's ordination to the priesthood.
Before turning it back over to Chittister, Forcades questioned if the best way to address the Catholic Church's sexism is by casting stones at the institutional church from a perspective that the society outside it is more welcoming to women.
"I don't know about that," she said.
Posted by Bridget Mary Meehan at 7:47 PM No comments:

Summary:
Joan Taylor and Helen Bond explore the Holy Land to rediscover the role women played as disciples of Jesus.
Mary Magdalene is an equal to the male apostles. Peter, the Rock, Mary, "The tower"
The word "tower' could have bee a "knick name" give by Jesus for Mary Magdalene
How did a wealthy woman living among the enemies of Jesus in Tiberias become a disciple? Was she healed by Jesus?
Luke's gospel states that Joanna, like Mary Magdalene, denoted their money to bankroll the Jesus movement.
Why has this been overlooked for centuries?
Male bias in the text places women in subordinate position, but this story is changing today to show the role of women and men disciples of Jesus on the road together.
Could there have been twelve women working in pairs as disciples similar to the men?
Women  would have to anointed with oil in the context of the culture.
Another woman Salome who appears in Mark's gospel at Jesus' execution and resurrection.  They visit a chapel dedicated to Salome who possibly was remembered as a healer by the early Christian community. She points out the inscription.
Joan and Helen also visit a catacomb in Italy where a woman bishop,  Churula, is depicted. At this time women were ministering at the altar as priests. In 495, Pope Gelasius condemned this practice and ordered the bishops to stop allowing women to preside at Eucharist.
In the fourth century women disciples begin to disappear from the scene as leaders as a result of Constantine's reign. This was due to the  the rise of  patriarchal power and the need for a single faith to unite it.
So, women were hidden from history for centuries. Their stories were ignored.
Today, there is a new consciousness of the role of women in the Jesus' movement and early Church.

Posted by Bridget Mary Meehan at 7:53 PM No comments: 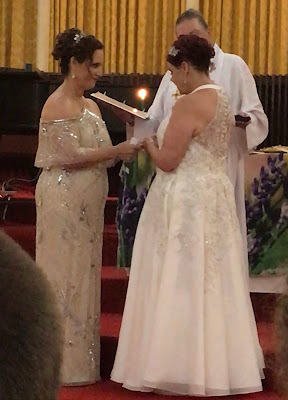 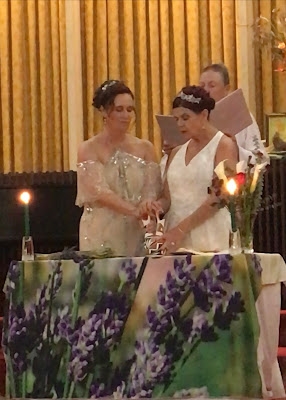 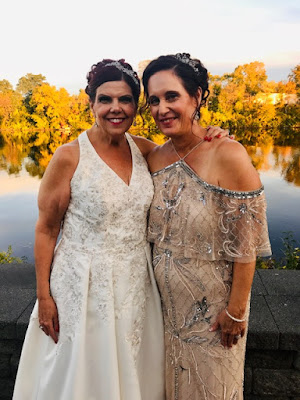 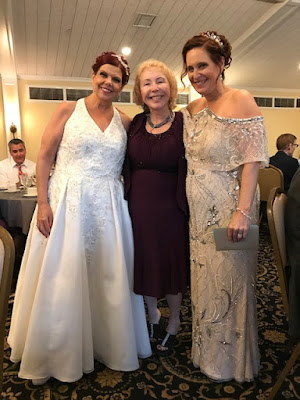 Posted by Bridget Mary Meehan at 9:36 PM No comments:


Centering Prayer focuses on being in the presence of God.
Being together, not accomplishing anything, is the goal. This form of quiet prayer takes us beyond thoughts, words, and images into the embrace of Divinity. "As proof that you are children, God sent the spirit of [the First Born] into our hearts, crying out, 'Abba, [God]!'" (Galatians 4:6). Christ's Spirit becomes more intimately present to us than we are to ourselves. "I live, no longer I, but Christ lives in me." (Galatians 2:20). Centering Prayer offers a glimpse into the fullness of divine love that is beyond our hopes and dreams. God dwells within us in infinite love every minute, every day, of our entire lives! Wow!
Centering Prayer can free you from tension and stress, open you to the indwelling divine presence within you and within all creation, and lead you toward deep healing and wholeness. Centering Prayer invites you to rejoice in your intimacy with the Holy One.. Jesus stressed the importance of this in the gospel when he said, "Let the children come to me and do not prevent them; for the [Reign] of God/Companionship of Empowerment belongs to such as these" (Luke 18:16).
Centering Prayer is a modem term that describes an ancient form of prayer referred to in a medieval mystical classic, The Cloud of Unknowing. The unknown author describes the path to contemplation in these words:
"Lift up your heart to God, with a gentle stirring of love desiring the Holy One for God’s own sake and not for divine gifts. Center all your attention and desire on the Divine Presence within you, and let this be the sole concern of your mind and heart.
Posted by Bridget Mary Meehan at 9:30 AM No comments: