Theme:  Thanks and Praise to our God 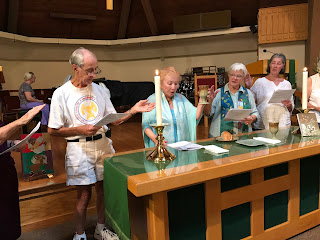 GATHERING SONG :  #638  “Morning Has Broken“ - verses 1-3
Presider:  In the name of God, our Creator, of Christ, our Liberator, and of the Holy Spirit, our Wisdom.
ALL:  Amen.
Presider:  My sisters and brothers, God is with you!
ALL:  And also with you.
Presider:  Let us pray.  Loving Creator God, you who birthed the cosmos, every living thing and each and every one of us, help us to notice your presence. Transform and change our hearts and help us love as you love. It is in loving as you love, that we can affect change on our society and our world.  Amen.

Presider:  Creator God, to whom all hearts are open, no desires unknown, and from whom no secrets can be hidden, cleanse our hearts by the inspiration of Holy Wisdom.
ALL:  We take your Word into our minds and hearts. Open them to new understanding.
Presider:  We ask for the grace to continually acknowledge our need to grow in goodness and caring for ourselves, for others and for our earth, and all the while to be Jesus for others, and to meet Jesus in others.
ALL:  We accept your love and understanding of the frailty of our human nature.
Presider:  We join with you, Jesus the Christ, believing that the strength and insight of the Holy Spirit will lead us to a deeper dedication to justice, equality and peace in our world.
ALL:   Amen

(All raise hands extended in prayer)
Presider: Let us pray to the God of unchanging love.
ALL:  Oh God, make us quick to see where and when we block your loving Spirit and thereby slow  down the progress of creation to its completion in you. And when we find it hard to forgive, help our egos to step aside and allow your Spirit to flow and bring about a change of heart.  Amen.

SHARED HOMILY:  Let us begin with our Prayers of Gratitude

PROFESSION OF FAITH
ALL: We believe in God, the Creator of the Universe, the fountain of life, flowing through every being. We believe in Jesus, the Christ, who reflects the face of God and the fullness of humanity. We believe in the Holy Spirit, the breath of God in the cosmos, who calls us to love and serve without counting the cost. We believe in our global communion with all circles of life. Amen to loving actions on behalf of justice, healing, compassion and equality for all in our world. Amen

GENERAL INTERCESSIONS
Presider:  We are people of faith.  We believe in the power of prayer. Some of us struggle to understand why there is so much suffering in our world, often caused by one person's inhumanity to another and by acts of nature. Yet, we believe that we send blessings to those who are struggling and who need to experience hope, to those who are grieving and need to be comforted in their loss, to those who are facing medical challenges that they be granted hope and healing. We bring the needs of people throughout our world to our gracious God.
After each intercession, the response is:  Loving God, hear our prayer.
For what else shall we pray?

Presider: Healing God, you faithfully listen to our prayers. Strengthen us as we strive to respond to the needs of your people and work for justice and positive change in our world. We make this prayer in the name of Jesus, the Christ, Amen. 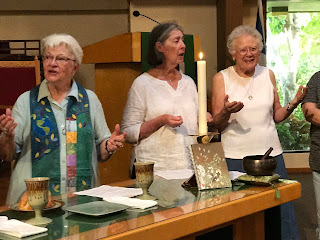 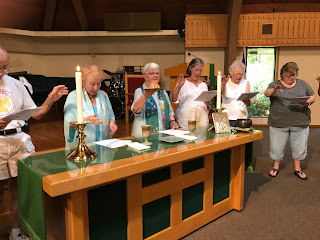 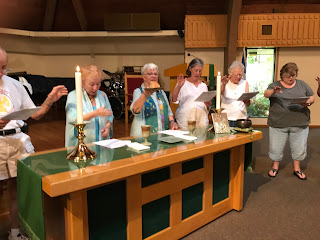 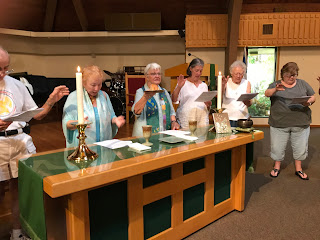 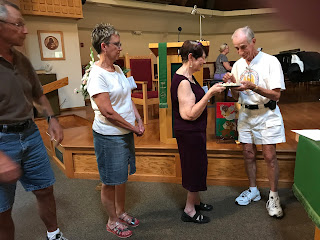 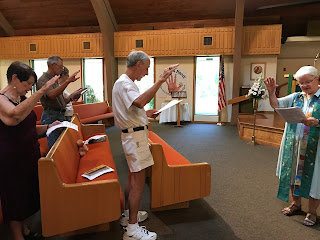 LITURGY OF THE EUCHARIST

PREPARATION OF THE GIFTS
Presider:  Blessed are you, gracious God of all creation, through your goodness we have this bread to offer, which earth has given and human hands have made.  It will become for us the bread of life.
ALL:  Blessed be God forever.

Presider: Blessed are you, gracious God of all creation, through your goodness we have this wine to offer, fruit of the vine and work of human hands.  It will become our spiritual drink.
ALL:  Blessed be God forever.

Presider:  Pray my friends that as we celebrate this breaking of bread and blessing of wine we accept more fully the mission of our Church by actively living our response to God’s call.
ALL:  May our gracious God accept these gifts for the praise and glory of God’s name, for our good, and for the good of all our Church.

EUCHARISTIC PRAYER
(Please join us around our inclusive table of love and nourishment, where all are welcome)
Presider: Creator God, we praise you who created this expansive and magnificent universe and all that exists and lives within it. Help us become more deeply aware that you created us, too, all of us, with no exceptions with something of your own life within us.   We are prone to not notice your presence, and sometimes not notice your presence in others, but your great love reassures us that we are worthy and lovable in your eyes.   Come now into our hearts and into this circle as we prepare this table, your table, which feeds us for this journey of life and sustains us each day.   Let us become what we eat.
ALL: “We are holy, holy, holy, we are whole.  You re holy.....I am holy.... We are holy.....

Voice 1:  Gracious God, source and sustenance of life, redeeming presence to the pain and brokenness of our world, Holy Spirit who enlivens all that exists, we beseech your healing power to come upon us and all for whom we pray today.  We join together with our community, with all creation everywhere, with all those living or dead who have touched our hearts and made us better people. (Names of our loved ones…………)

Voice 2:  We ask you to enliven anew in our hearts the empowering grace of your abundant Spirit, who infuses for us these gifts of bread and wine with the transforming energy of life, to nourish and sustain us in all times and especially in times of need.
(Please extend hands as we recite the consecration together.)
ALL:  Before he was given up to death, a death he freely accepted, Jesus took bread and gave you thanks.  He broke the bread and gave it to his disciples and said:  Take this, all of you, and eat it; this is my body which will be given up for you.

ALL:  When supper was ended, Jesus took the cup.  Again he gave you thanks and praise, gave the cup to his disciples, and said; Take this all of you, and drink it;  this is the cup of my blood, the blood of the new and everlasting covenant.  It will be shed for you and for all.  Do this in memory of me.

Presider:  Let us proclaim the mystery of faith:
ALL:  Christ has died, Christ is risen, Christ will come again.

Voice 3:  As we gather around this Eucharistic table, we recall God’s blessing and love from ages past, and we celebrate anew the gift we share among us at this Eucharistic feast. May the Spirit of life and wholeness, who transforms the gifts we present, transform us too, that we may be refreshed in our inner being and be empowered to bring mercy, love and healing to those whose lives we touch and who are Jesus to us.

Voice 4:  Remember gracious God, your Church throughout the world.   We pray with Bridget Mary, our Bishop, and Francis, our Pope, that we may be readied to love all those you love, and welcome them into our midst.

Voice 5: Grant that, in union with all peoples living and dead, we may strive to create a world where suffering and pain are diminished, where hatred and violence are erased, where justice and peace are restored, and where all people can live without fear, in health and wholeness. May we all be united in acclaiming the God of Life, whose abundance is offered to each and to all, ‘til the Kin-dom arrives in the fullness of time.

ALL:  Through Christ, with Christ, and in Christ, in the unity of the Holy Spirit, all glory and honor is Yours, gracious God, forever and ever.     Amen (sung).

THE PRAYER OF JESUS
Presider:  Let us join hands and raise our voices as we sing the Prayer that Jesus taught us:
ALL:  Our Father and Mother…….
Presider:  Deliver us, God, from every evil and grant us peace in our day.  In your mercy keep us holy in your sight and protect us from all anxiety and fear.  We watch and wait, discerning signs that you are always with us.
ALL:    Amen.

Presider: Let us offer each other a sign of peace.

COMMUNION
Communion: Instrumental by Mindy
After Communion:  “God Is” by Mindy Simmons
PRAYER AFTER COMMUNION
Presider:  May wonder, gratitude and thanksgiving fill us, and may compassion replace the numbness we experience in our hearts from having seen too much hatred and injustice. Lift the veils from our faces so that your wonderful beauty may be allowed to shine out from us.

Introductions - Announcements
CONCLUDING RITE
Presider:  May God be with you.  ALL:  And also with you.
Presider:  Let us call upon our gracious God as we share blessings with each other.  We bless one another and pledge to live the Gospel of Christ.  ALL:  Amen.

BLESSING
( Please extend hands in mutual blessing)
ALL:  May our gracious God, bless us all gathered here, in the name of God our Creator, in the name of Jesus our strength, in the name of the Holy Spirit our Wisdom, as we minister to one another in love, for we are the Body of Christ and the face of God to the world.   Amen. 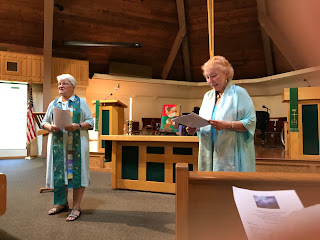 CLOSING HYMN: #628  “We Are Called” - all verses
DISMISSAL
Presider:  Go in the peace of Christ.  Let our Spirit-filled service continue!