"The Pieces of the Puzzle Are Falling into Place: Catholic Officials, a Global Web of Childhood Sexual Abuse, and the Judgment of History"

Roman Catholic Womenpriests: "What the World Needs Now is a New St. Patrick" by David Gibson How about St. Brigit too! 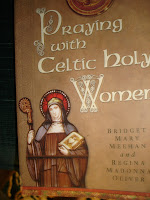 "At this point in the Catholic Church's long-running saga of the sexual abuse of children by priests there are few surprises and fewer heroes. The two-day "summit" in the Vatican that wrapped up on Tuesday brought the bishops of Ireland together to meet with Pope Benedict XVI to discuss the issue, much as leaders of the American hierarchy were summoned to Rome for an overnight palaver with Pope John Paul II in 2002. "

Bridget Mary's Reflection:
What the church needs now is a new St Patrick and St. Brigit!
How about a renewed church, rooted in partnership and equality that is Christ-centered, Spirit-led and justice oriented! Perhaps, a modern day verison of the the early Celtic model of St. Brigit of Kildare where women and men, celibate and married, lived side by side in a double monastery and raised their children in Christian Community. The church in Ireland needs a vibrant transformation that is rooted in Celtic spirituality. Some of this treasury includes a celebration of creativity, poetry, hospitality to the stranger, a warm welcome to all who cross our path, service to the poor, connectedness to earth and living beings, equal partnership between women and men, a mystical sense of communion with life and a dynamic embrace of a loving God who is very fond of us and the communion of saints as family members.
Posted by Bridget Mary Meehan at 10:38 PM 1 comment: 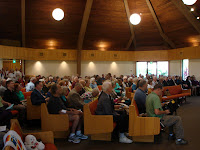 Sarasota, FL, United States (AHN) - The Vatican has threatened to excommunicate Catholics who support the ordination of the first women priests and deacon in Florida by an excommunicated former nun. http://www.allheadlinenews.com/articles/7017834179

Response by Bishop Bridget Mary Meehan
First clarification I am not a former nun. While I belonged to a canonical community for ten years, the Immaculate Heart of Mary Sisters (Philadelphia) I now am a Sister for Christian Community which is an independent order of Sisters whose charism is to build Christian community wherever we are and to celebrate all people as God's family. Our prayer is "that all may be one".

Second clarification: We did not receive a letter from the Vatican or from our local bishop before these ordinations as this all headline news article seems to imply.


The good news is that Catholics are not afraid of excommunication!
Pat Ferkenhoff, a member of a local parish in Sarasota, Florida, was quoted in the Herald Tribune article as saying: "Well, I'm not going to get my hed chopped off or be burned at the stake." ( Church Disapproval doesn't deter crowd", Herald Tribune, by Anna Scott, Feb.7, 2010)

An atmosphere of joy permeated the jam-packed church with over 250 supporters of Roman Catholic Womenpriests for the ordinations of three women in Florida despite Bishop Frank Dewane's excommuniation decree. (See pictures and articles below on blog)

Actually, the bishop's threat (Sarasota Herald Tribune article reported by Anna Scott on Feb. 6th, 2010) increased our attendance. Several people told us they came to be in solidarity with the women being ordained and to support our justice movement for women in a renewed priestly ministry in our church. The people of God seem to regard this punishment as a badge of honor.

It is ironic and sad to read about the meeting of the Irish bishops with Pope Benedict this week. None of the Irish bishops were fired for their handling of the horrific pedophilia crisis. Not one bishop in Ireland or elsewhere has been excommunicated for their handling of the pedophilia crisis which has destroyed lives of Catholic children! Yet, the Vatican threatens faithful Catholics who support Roman Catholic Womenpriests with excommunication. I believe Jesus would weep ! In this Lenten season, our church needs major reform and renewal.
The Vatican has a long history of excommunicating, interdicting and punishing people in one century and canonizing them in another century. Pope Benedict canonized Mother Theodore Guerin, an excommunicated nun in 2005, and will canonize Mother Mary MacKillop, another excommunicated nun in 2010. Mary Ward, a foundress of a religious order modelled on the Jesuits, was villified by church authorities. She was imprisoned at one point, and recently has been declared Venerable, a step on the path to sainthood. One, of course, cannot forget St. Joan of Arc, patron of France, who rejected giving assent to church authorities and followed her conscience. She was burned at the stake and later declared a saint! St. Thomas Aquinas, one of the church's greatest theologians, was excommunicated after his death!

So, the supporters of Roman Catholic Womenpriests who attended the Florida ordinations are in good company, and perhaps even on a fast tract to Sainthood! We are not leaving the church. We are leading the church into a new era of justice and equality for women in the church, reclaiming our twelve-hundred year heritage of women deacons, priests and bishops, and following Jesus' example of Gospel equality.

Roman Catholic Womenpriests reject the automatic excommunication issued by the Vatican.
http://www.romancatholicwomenpriests.org/
Posted by Bridget Mary Meehan at 10:55 AM No comments:

Permission to use with note below:
Hello! I was at the Sarasota ordinations... Feel free to forward the link in any way you think is appropriate and to use the photos as you'd like.http://bit.ly/cX2cffDeborah WinarskiChicago, IL=

Other Gallery:
http://spotted.heraldtribune.com/galleries/index.php?id=323733
Posted by Bridget Mary Meehan at 8:37 PM No comments:

Catholic Priest Breaks Silence on Women’s Ordination
Release date: February 16, 2010
Media Contacts: Fr. Roy Bourgeois at 706-570-5359
Janice Sevre-Duszynska at 859-684-4247, rhythmsofthedance@msn.com
Bridget Mary Meehan at 941-955-2313, 703-505-0004, sofiabmm@aol.com
Visit: http://www.romancatholicwomenpriests.org/ and http://www.bridgetmarys.blogspot.com/
On Saturday, February 20, 2010, Father Roy Bourgeois, Maryknoll priest of 38 years, founder of the School of the Americas Watch and Nobel Peace Prize nominee will speak in support of women’s ordination and the Roman Catholic Womenpriests movement. The presentation will take place from 1:30 - 4:30 p.m. at St. Andrew United Church of Christ, 6908 Beneva Road in Sarasota, FL 34238. The event is sponsored by Mary, Mother of Jesus Inclusive Catholic Community and is part of a national tour. "Sexism is a sin," said Fr. Roy Bourgeois in an August 2008 homily at the ordination of Janice Sevre-Duszynska in Lexington, KY. "No matter how hard we may try to justify discrimination, in the end, it is always wrong and immoral." Bourgeois, a Roman Catholic priest, is facing excommunication for his public support of women’s ordination and the Roman Catholic Womenpriests movement. "The hierarchy will say, it is the tradition of the church not to ordain women," Bourgeois continued. "I grew up in a small town in Louisiana and often heard, ‘It is the tradition of the South to have segregated schools.’ It was also ‘the tradition’ in our Catholic church to have the Black members seated in the last five pews of the church. Our Church leaders at the Vatican tell us that women cannot be ordained . With all due respect, I believe our Catholic Church’s teaching on this issue is wrong and does not stand up to scrutiny." In addition to his religious work, Bourgeois is the founder of the School of the Americas (SOA) Watch, and is internationally known for his work to end U.S. government–funded training of Latin American soldiers in torture techniques. Fr. Roy and SOA Watch were recently nominated for the 2010 Nobel Peace Prize by the American Friends Service Committee. In 1994 Pope John Paul II issued an apostolic letter Ordination Sacerdotalis which states that Catholics may not even speak about women’s ordination. Fr. Roy is breaking this glass ceiling on his national tour. Bridget Mary Meehan, Roman Catholic Woman bishop of the Southern Region and pastor of Mary, Mother of Jesus Catholic Community, said, "Women served as deacons, priests and bishops in the early Church. Roman Catholic Womenpriests are leading the Church into a new era of renewal by reclaiming our ancient tradition of women as disciples and equals." Bourgeois and Dorothy Irvin, archaeologist and theologian known for her work on women priests in the Early Christian tradition, will present the Levi Award in absentia to Ruth Kolpack and Sr. Louise Akers. Established by the Minnesota-based Lydia’s Gathering Foundation, the Levi Award recognizes Catholics dismissed from employment or excommunicated by the Church for supporting women’s equality. For more information, contact Dorothy Irvin at 612-387-3784.
Posted by Bridget Mary Meehan at 7:31 PM No comments:

Roman Catholic Womenpriests challenge Cardinal Francis George of Chicago, president of the U.S. Conference of Catholic Bishops, who said that New Ways Ministry does not provide "an authentic interpretation of Catholic teaching," in a February 5, 2010 statement.Roman Catholic Womenpriests challenge Cardinal George, the USCCB and Pope Benedict XVI to be open to the Christ in all people, including the lesbian, gay, bisexual and transgendered (LGBT) persons. RCWP also challenges the Vatican to bless and affirm the LGBT community, the New Ways Ministry to them, and to welcome the prophetic witness and challenge of both, as well as their struggles, joys and gifts. RCWP sees Cardinal George’s statement as exclusionary and unacceptable for Catholics who embrace Jesus’ Gospel of inclusivity, equality and justice: a discipleship of equals. New Ways Ministry, co-founded by Sr. Jeannine Gramick and Salvatorian Father Robert Nugent, is based in Mount Rainier, Md. It is a 33-year-old "gay-positive ministry of advocacy and justice for lesbian and gay Catholics and reconciliation within the larger Christian and civil communities. "On May 23, 2000, the Congregation for the Doctrine of Faith, under the leadership of Cardinal Joseph Ratzinger, issued a document ordering Gramick and Nugent to cease ministry to gays and lesbians because they were not strong in teaching that homosexual acts were intrinsically "disordered" and that the homosexual inclination was objectively "disordered" . The central issue, according to theologian Mary Hunt, was that neither Gramick nor Nugent was willing to agree that homosexual acts were intrinsically evil and that the teaching was virtually infallible and unalterable. Gramick rejected the 2000 order and has continued to provide support to the LGBT community. In the formal document she was informed that she "may not speak or write on homosexuality, on the notification, or on any ecclesiastical processes that led to it..." further, that she "may not encourage the faithful to publicly express their dissent from the official Magisterium, nor protest decisions of the Holy See, nor criticize the Magisterium in any public forum whatsoever." Gramick, however, as a matter of informed conscience, defied the Vatican’s edict and continues to lecture widely on behalf of justice for the LGBT community. She believes that only if all people are treated with dignity and respect will there be peace and harmony in the world. RCWP supports and celebrates her courage.Catholics continue to speak out against prejudice. In 2009, before a Maryland House of Delegates committee, Francis De Bernardo, executive director of New Ways Ministry, said: "It would be a grave error in judgment – both politically and morally – for government leaders to assume that the Catholic hierarchy reflects the belief of most Catholic people." The hierarchy is not the Catholic Church; the Catholic Church is the People of God. Roman Catholic Womenpriests walk in solidarity with our sisters and brothers in the LGBT community. We support New Ways Ministry and their compassionate ministry to the People of God.
Posted by Bridget Mary Meehan at 7:17 PM 5 comments: 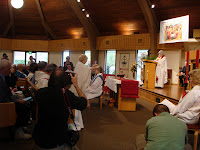 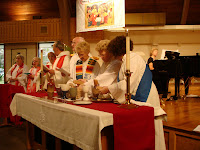 "Good!" said Bridget Mary Meehan, the former nun who is performing today's ordinations and is one of five bishops in the national movement. "They're upping the ante. People will have to be courageous to support us and that is what this is about. Like our sister Rosa Parks, we refuse to sit on the back of the bus any longer."