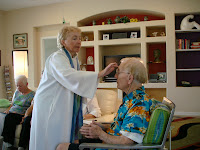 "Faithfully , if not obediently, Catholic"
By Katie Balestra ,Saturday, January 23, 2010
http://www.washingtonpost.com/wp-dyn/content/article/2010/01/22/AR2010012202919.html?hpid=topnews
"Our goal is to bring about full equality of women in the Roman Catholic Church," said Meehan, 62. "We love the faith. We love the spirituality. That's why we remain Catholic. We are holding disobedience to an unjust law that discriminates against women. We're willing to go the whole mile with the institution on this." ...
"Meehan was 8 when her family moved to Arlington County from Ireland in 1956. Her father said she spent her free time as a child "playing church," setting up an altar in their home. "She was a priest from day one," said Jack Meehan, 85, in a thick Irish brogue. "I'm very proud of her."
She thinks the Vatican's actions are motivated by fear.
"They're so afraid because they're seeing that people are actually thinking this is a good idea," said Meehan, who discusses the issue on her
blog. "We're taking it from the hierarchical model into the open, inclusive Catholic community of equals. And that's the thing that threatens them the most, a total change from one model to another."
Katie Balestra is a freelance writer based in the District.
Posted by Bridget Mary Meehan at 7:44 PM 2 comments:

"Nearly 5,000 Catholic priests [in the U.S.] have sexually abused over 12,000 Catholic children…but they were not excommunicated," says Father Roy Bourgeois, who faced the latter scenario after helping celebrate what the Vatican considers to be an illegitimate ordination mass in August 2008. Bourgeois, a Vietnam veteran with a Purple Heart who became a prominent peace activist, stood with the trailblazers of the female ordination movement in Lexington, Ky., to make Janice Sevre-Duszynska a Catholic priest."

"The Vatican may soon have further explaining to do, this time in a U.S. courtroom. A federal appeals court ruled in late November that a lawsuit arising in Kentucky over the Vatican's negligence in dealing with sexual abuse could proceed -- the first time a court that high has recognized the Holy See's potential liability in this arena.One of the key pieces of evidence in the lawsuit? A 1962 memo, approved by Pope John XXIII, directing Catholic bishops to keep silent about sex-abuse claims. "

Posted by Bridget Mary Meehan at 9:00 AM No comments:

"As young Catholics, we are indebted to our theological forebears, like Mary Daly, who helped us to understand that God created us equal -- equal in gender, race and more. We may not embrace everything about a person and their writings, but in some way we have been transformed by a key idea that opened up new ways of thinking. And, in turn, we hope to transform what we can of our church and society. This is what happens when an idea catches fire. It helps us illuminate the world. "
Nicole Sotelo
http://ncronline.org/blogs/young-voices/when-ideas-catch-fire
Posted by Bridget Mary Meehan at 6:56 PM No comments:

Pope summons all bishops to meeting on church scandal
By John Cooney
Wednesday January 20 2010
"Bishops of all 26 dioceses in Ireland have been summoned to Rome next month by Pope Benedict for an unprecedented emergency meeting on the child clerical abuse scandals.
An index of the urgency surrounding the Rome venue is that the heads of the major Vatican Congregations will take part in the talks in a desperate bid to address the anger and shock felt by Catholics since the publication of the Ryan and Murphy reports."
"Sources said Pope Benedict's letter would not, however, contain a detailed blueprint for the reorganisation of the Irish church, such as the holding of a national synod or assembly of bishops, priests and laity. "
- John Cooney
Irish Independent
Bridget Mary's Response:
While the Pope may hope that summoning the Irish bishops to Rome in response to the church scandal, will be a "shock and awe" approach to calm the Irish rebellion, I doubt it. As my Irish cousins say the Pope should "sack" the bishops, who were involved in the cover-up. I suggest that Pope Benedict invite survivors of abuse to Rome and listen to their pain. Perhaps, they could help him craft a worldwide pastoral letter of repentance. Next, the Vatican could learn a lot from Ireland's grandmothers. My relatives tell me that some are so angry that they are not attending Mass anymore. These women were weekly, some even daily Mass-goers. My opinion is that Ireland should return to its earlier tradition of a married priesthood and women in priestly ministry. Think Bishop St. Brigit who along with Bishop Conleth administered a double monastery in Kildare and St. Ita of Killeedy, who heard her nuns confessions.
Posted by Bridget Mary Meehan at 9:57 PM 1 comment: