"There was brave talk at St. Joseph’s University about clergy abuse. Will Pope Francis follow with action?" by Maria Panaritis, The Inquirer

https://www.philly.com/news/columnists/catholic-church-clergy-abuse-pope-francis-vatican-bishops-saint-josephs-university-maria-panaritis-20190208.html mpanaritis@phillynews.com
"On a Jesuit campus in Lower Merion Township, inside a building named for a Delaware County man who would one day become a cardinal of the Roman Catholic church, the answers to clergy sexual abuse seemed, at least to those typically in church pews, perfectly clear.
Major changes are in order, said a group of thoughtful people who call themselves the faithful but who, unlike their bishops, do not wear mitre hats or white robes. Such people gathered at St. Joseph’s University a few nights ago to demand major institutional reforms.
Here’s some of what they had to say:
Force dirty bishops and priests to resign or fire them. Let women become priests. Let priests marry. Let married men and women become priests. Make sure that American leaders of the church return from this month’s Vatican meeting on clergy abuse with substantive orders to fix the rotting architecture of a religious institution that millions of Pennsylvanians turn to for sacred guidance."
Posted by Bridget Mary Meehan at 9:21 PM No comments: 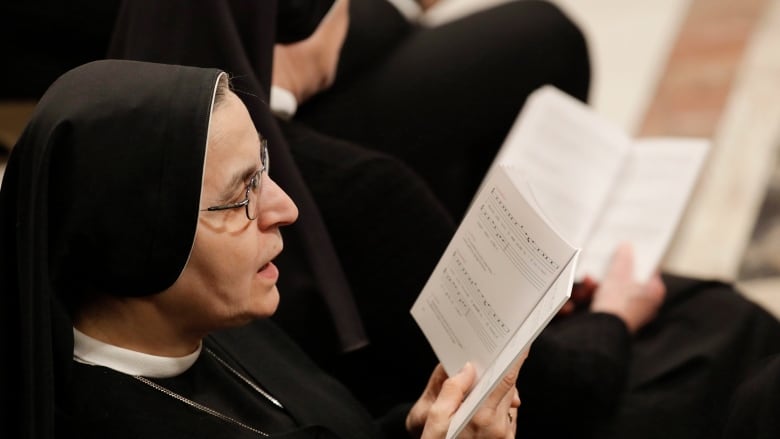 Pope Francis acknowledged for the first time this week that priests and bishops have sexually abused nuns. (Andrew Medichini/Associated Press)
Sister Donna Brady wasn't surprised by the Pope's admission this week that nuns have been sexually abused by priests, but she's relieved the subject is finally out in the open.
Brady, a member of the Sisters of Saint Martha in Antigonish, said when she learned of the abuse years ago, she felt "a lot of anger and deep sorrow."
Pope Francis's comment to journalists on Tuesday marked the first time the Vatican has acknowledged the abuse. He said the Vatican had been confronting the issue for some time and vowed to do more
Church officials urged to meet with sex abuse victims before critical Vatican summit
Brady spoke with CBC Information Morning guest host Pauline Dakin about what this means for the future of the Roman Catholic Church. Their conversation has been edited for clarity and length.
Do you have a sense of why the Pope is making this admission now and addressing it?
Maybe because the time is right. It's almost like valuing women has been something our world in general hasn't really done, and our church in particular doesn't do that. And so maybe as women [we] are growing in awareness of our own value and that we do have gifts to offer, maybe that begins to open up the possibility that things can change.
I know you're a woman who has dedicated her life to the Catholic Church. So how are you feeling today?
I'm hoping that this opens a dialogue, and that things can begin to change. In my mind, this is all part of an abuse of power and authority. It has many manifestations. And for so long, it's like the church has not heard the voices of women and they haven't recognized and valued their gifts. It's very easy to use and abuse what you don't value.
So I'm hopeful that women are maybe tapping more into our own power, and by power I mean the gift that God has given us for the good of the community. And I think as we're knowing that and getting stronger in that, that allows us to enter into a dialogue that should change the power dynamics in the church. 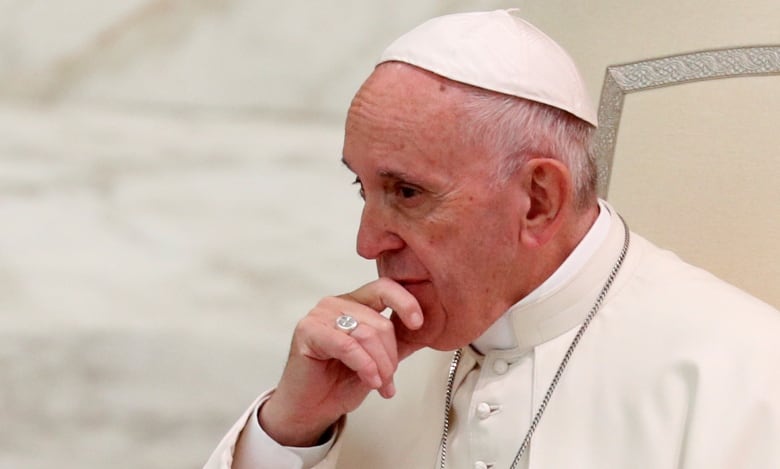 The Vatican on Wednesday clarified comments by Pope Francis about a case of what he called "sexual slavery" within a French congregation of nuns, saying he was referring to an abuse of power that was reflected in instances of sexual abuse. (Max Rossi/Reuters)
Because traditionally in terms of power and influence and regard, nuns have sort of taken a back seat, haven't they?
In some ways within the institutional structure, the hierarchical structure of the church, that's true. But out in the world, which is always our mandate, we've been very powerful in terms of health, education, social services. Where we haven't had influence is in the hierarchical structure of the church.
You mentioned that this is a problem that we see take many forms. I think you're referring to the sexual abuse of children and more vulnerable people within church congregations?
That's true. And it's other forms of abuse of power. St. Paul says that there are many gifts in the church. The problem has been we've put all the gifts that the Spirit gives for the building up of the community, and we've put it into the domain of the ordained clergy.
They then have taken power over everything. So sexual abuse is one form of that abuse. Also you can work in parishes and have something all set up and another priest comes in and doesn't like it, so he can just dismantle the whole thing. Too much power.
And this isn't just happening to religious women. The whole abuse — both sexual and otherwise — has been happening to all women in the church.
Do you ever think this is just too deeply entrenched, that the Catholic Church is not fixable in its current configuration, let's blow it up and start over?
Sounds pretty tempting sometimes doesn't it? I guess my hope lies in the example of the LCWR, which is the Leadership Conference of Women Religious in the U.S. For five years, the Vatican was investigating them, and in many ways they could have just walked away. But they really decided to stay and enter that process in a way that would develop dialogue, communion and bring about change.
And in the process they found a way of being true to themselves, bringing about change and yet working for unity and not division. So that gives me great hope. Because not all our clergy are bad, not all of our priests, not all of our bishops. To me it's an imbalance of power and the way forward is to begin to distribute the gifts back to the community.
Information Morning - NS
Antigonish Sister speaks out about about newly admitted sexual abuse of nuns at the hands of Catholic priests
00:00 11:03
Another scandal in the Catholic Church, as the Pope admits nuns are abused at the hands of priests. We heard some thoughts on going forward from a Sister of St Martha. 11:03
What would you want to see change right away?
I would want to see right away that the rethinking and restructuring of the church hierarchy happens not only from the top down but from the grassroots up. In the parishes right now, the voice of the laity is only advisory. I would say it has to be set up in such a way that laity's voice has authority and power. And we start on the parish level — as well as coming from the Vatican level — then I think things can begin to move.
And does this mean allowing women to be priests?
I don't think so. I think that's a whole separate issue. What we're talking about is authority in the church. Right now all authority is in the hands of the clerics. Doesn't have to be. That whole system can change, as far as I'm concerned.
What do you think it's going to take to make change happen?
I'm not sure, but I have great hope in the spirit of God being able to move mountains. It's happened before and this just might be the time … I think right now we are being offered an invitation to rethink who we are, who we're called to be in relation with each other, our earth and our God. It's like everywhere we look it's so obvious, and maybe it's going to become more obvious to more people that the structures we're operating under is they're the exact opposite of what Jesus lived and taught, and they're definitely not working.
So now is time for some change.
Posted by Bridget Mary Meehan at 9:14 PM No comments: