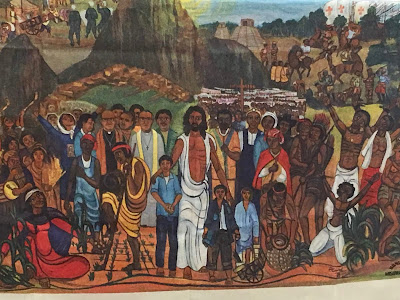 Welcome to everyone on this last Sunday of the Easter season as we prepare for Pentecost next week. Our theme today is being one with Jesus and our Abba Father/Amma/Mother and how to live out the depths of that love and unity in our lives. The readings for today show how we are consecrated into loving action through the prayer of Jesus our brother.

Stephen, filled with the Holy Spirit, looked to the sky and saw the glory of God and Jesus standing at the right side of God. “Look!” he exclaimed. “I see the heavens opened, and the Chosen One standing at God’s right hand!”

The crowd of onlookers shouted and held their hands over their ears. They rushed as one at Stephen and dragged him out of the city. The witnesses then stoned him, having laid their robes at the feet of a young man named Saul.

As they were stoning him, Stephen prayed, “Jesus, receive my spirit.” He fell to his knees and cried out in a loud voice, “Please don’t hold this sin against them!” And with that, he died.

These are the words of early disciples of Jesus and the community affirms them.  Amen.

Jesus looked to heaven and said,
Protect those whom you have given me—
That they may be one
Even as we are one.
Consecrate them –
Make them holy through the truth—
For your word is truth.
As you have sent me into the world,
So I have sent them into the world;
I consecrate myself for their sakes,
That they may be made holy in truth.
I don’t pray for them alone.
I pray also for those
Who will believe in me through their message,
That all may be one,
as we are one—
I in them, you in me—
To them I have revealed your Name,
And I will continue to reveal it so that the love you have for me
May live in them
Just as I may live in them.

These are the words of the disciple John and the community affirms them.  Amen. 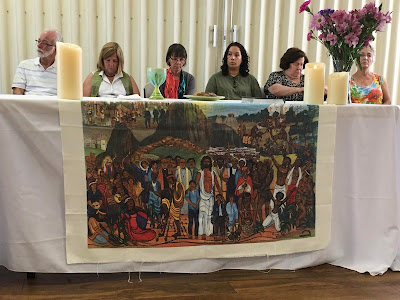 The thing that strikes me about Stephen is that he seems to have been an ordinary guy.  He wasn’t one of the Twelve apostles and wasn’t present at the Last Supper.  But I like to imagine him there in the procession, with Jesus riding on the donkey, making its way into Jerusalem.  I think of him in the crowd, his palm frond waving, his voice shouting Hosanna. In the early days after the death of Jesus, this ordinary Greek Jew was appointed a deacon to care for Greek-speaking Jewish widows and orphans to ensure that they were cared for as well as their Hebraic companions.  An ordinary guy, but a guy completely taken up in the spirit of the Christ.  A guy who, fully aware of the dangers faced by the followers of Jesus, was willing to speak out about injustice.  An ordinary guy who speaks truth to power.  A guy willing to pay the price for justice with his own life.

And standing in the crowd, with the executioners’ cloaks piled around his feet, is “a young man named Saul.”  I like to think of him, too.  A devout, Pharisaic Jew, strong in his belief that these followers of Jesus are a threat to the future of Judaism, both from within by straying from the law and from without, by possibly bringing the wrath of Rome upon them.  Saul would soon himself have a life-changing, experience of the risen Christ, and become Paul, apostle to the Gentiles, who would define the shape of Christianity for millennia.

What was Saul thinking as Stephen fell to the ground, forgiving his tormentors as he perished?  The story says that Saul fully approved of the stoning. But did something start happening within him at the time of Stephen’s death?  Was a seed planted that would blossom into the vision of Christ telling him “I am Jesus, whom you are persecuting?”  Was the Christ spirit, already alive in him, shaken awake at the sight of this ordinary guy giving his life in a most extraordinary way?  We will never know, but I like to think so.

Lynn on the Gospel:

Our gospel is Jesus praying at the Last Supper before leaving for Gethsemane.  This prayer, inserted later into John’s gospel, is nonetheless a touching recreation of what early believers imagined was in Jesus’ heart at that time. Composed a century after the crucifixion, it has the benefit of hindsight as it recreates the last words of a divine man about to parted from those he loves most in this world.

Judas has already left the room in anger. Jesus knows his time is short. So what is he praying about?  Us. You and me.  We are the last thought of Jesus before Good Friday. He prays for those he sends out into the world and for all who will believe through their message.  Jesus is asking for people of good heart in every era to know and spread truth, to know our own holiness, to avoid conflict and to find unity in Spirit. He wants us to be as close to each other as Jesus is to Abba, for us to feel one with God and Jesus, to know with Jesus-certainty how deeply we are loved by Abba or the feminine Divine, Amma.

His prayer is not merely for loving unity inside a safe circle. Jesus is always more daunting than that. He prays for unity with all of Creation; the Jesus we know wants us to listen and find common ground, to discover commonality with the refugee, the person of a differing political persuasion, the outcast and the everyday, the outcast ordinary aggravating person as well as ecosystems of animal and plant life.

And to help us live together in love, Jesus prays for us to be made holy and consecrated – to be set apart and dedicated to a higher purpose. The view of the body of believers in the first century established in verse like this gospel that we are holy by virtue of our creation and in our standing with Jesus. We are consecrated bread and wine sent out into the world. As we say in our Eucharistic prayers, “as we share communion, we will become communion, both love’s nourishment and love’s challenge”.

What did you discover in the death of Stephen and in the prayer of Jesus? What does it mean for you? What will praying as Jesus does mean for you in living each day? 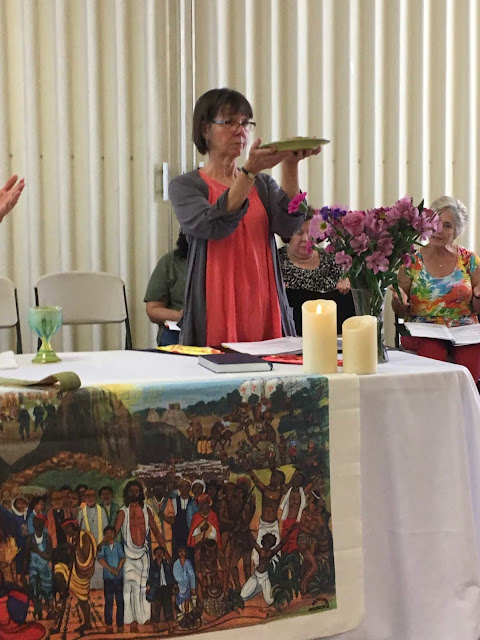 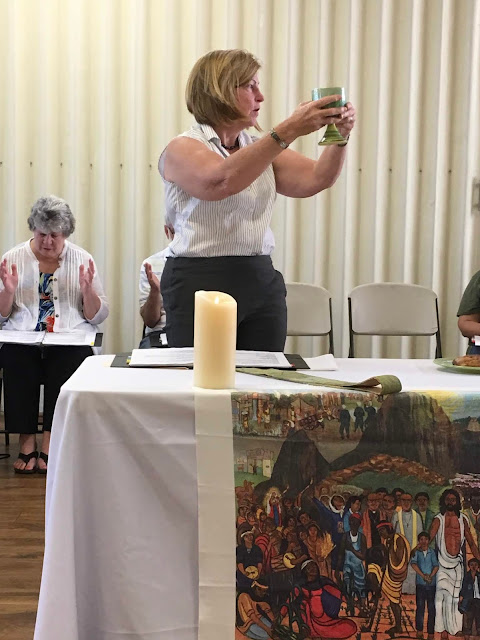 Posted by Bridget Mary Meehan at 6:21 AM No comments: