Posted by Bridget Mary Meehan at 11:24 PM No comments:

A Musical "Tribute" to Corporations/ Let the 99% Rejoice!

http://www.youtube.com/watch?v=ws0WSNRpy3g
Posted by Bridget Mary Meehan at 11:03 PM No comments:

Dear Supporter of the Association of Roman Catholic Women Priests,
Our Spirit-led movement for Gospel equality, nonviolence, justice and a people-empowered Church continues to grow.
At the end of March our second woman priest was ordained in Latin America! We now have candidates in the U.S. and Latin America! We are in a new moment! On September 10, 2011, two women were ordained priests, including our first from Texas, 84-year-old Adele Jones and our first from Connecticut, Dorothy M. Shugrue and Donna Rougeux from Kentucky was ordained deacon. In November Judy Beaumont was ordained a deacon. Judy has been involved with our movement almost since the very beginning and we are thrilled that she is on the journey toward priesthood. We are planning for the ordination of our five deacons in 2012.
Media – television, radio, print and Internet – have helped get the word out. We collaborate with Women's Ordination Conference and Call to Action to support Fr. Roy Bourgeois who said. “...it is my conscience that compels me to say publicly that the exclusion of women from the priesthood is a grave injustice against women, against our Church and against our Loving God who calls both men and women to the priesthood.”
A new vision is rising up: one of Gospel equality, nonviolence and justice in our church and world community!
That’s what ARCWP is about. In the friendship that Jesus offers us, we work to bring about the Kin-dom by serving and being with the grassroots, the poor and marginalized and “being out there” for justice and peace challenging the powers that be. As a branch of the international women priest movement, our charism calls us to name the connections between sexism and violence toward women, children and the planet. We do this locally, nationally, and internationally.
We know that we can count on you to support our efforts. Make your tax-deductible donation to
ARCWP
18520 Eastshore Drive
Ft. Myers, Florida 33967
Check out Bridget Mary’s blog for the latest in the movement! http://bridgetmarys.blogspot.com/
and our website: http://www.associationofromancatholicwomenpriests.org/
Blessings as we move forward together...
Association of Roman Catholic Women Priests
P.S. Don't miss "Pink Smoke Over the Vatican" when it comes to your community!

On Saturday, January 21, 2012 at 3:00 p.m. Judy Beaumont of Ft. Myers will be ordained a priest in the Association of Roman Catholic Women Priests. The presiding bishop will be Bridget Mary Meehan of Sarasota and Falls Church, Virginia. The ceremony will take place at Lamb of God Lutheran-Episcopal Congregation, 19691 Cypress View Drive, Ft. Myers, Florida 33967 (239-267-3525, Walter Fohs, Senior Pastor). Prior to the ordination, at 1:00 p.m. there will be a viewing of "Pink Smoke Over the Vatican," the award-winning documentary of the struggle for justice for women in the Roman Catholic Church. All are welcome to attend.

The ordinand, Judy Beaumont, 74, has a rich and varied background as a religious sister, peace activist and as a minister to the poor and homeless. She entered the Benedictine Sisters of Chicago at seventeen and remained in their service for 35 years as a teacher and a volunteer resettling Vietnamese refugees. During this time she earned a bachelor's degree from Mundelein College and a Masters in Religious Education from Loyola University. In 1981 she left Chicago for Connecticut to join the anti-nuclear peace witness near Groton, Connecticut, at that time the home of the Trident Submarine, an instrument of mass death. In 1982, she was a member of the Trident Nein Plowshares nonviolent action which resulted in prison time. Later she helped to start My Sisters' Place, a shelter for homeless women and children in Hartford.

In 1989, she and Judy Lee, her partner in ministry, left Connecticut. Judy worked in two mission parishes and also became the director of religious education for a large parish in Fort Myers. This service was interrupted by her bout with a rare leukemia which she miraculously vanquished with the help of God in 2007. In 2008 she helped establish Good Shepherd Ministries of SW Florida, Inc. and works tirelessly serving the poor and homeless of Fort Myers. She is called forth by Call to Action of Southwest Florida and the Church of the Good Shepherd: an inclusive Catholic Community where she has served in a deacon's role since 2007. The church is located at 2621 Central Ave., Ft. Myers, FL 33901.
"Although immersed in all things Catholic since birth, I never experienced a call to the 'males-only' clerical priesthood." said Judy Beaumont. "After witnessing the renewed priestly ministry of women, it only seems right that I follow their example and call to join in bringing about a new inclusive church leading in the work for justice and equality in solidarity with marginalized and oppressed persons. It is so unfortunate that the Vatican takes a fundamentalist view of the Gospel when claiming that women cannot be ordained since Jesus chose only male apostles. Their failure to listen to contemporary Catholic Biblical scholars who find no basis in Scripture for a male-only clergy continues to relegate women to second class membership. Just think what it would do for women's rights worldwide, if the Vatican were to recognize and allow women's ordination."

The Association of Roman Catholic Women Priests rejoices in a "holy shakeup" that millions of Catholics worldwide welcome. The good news now is that male priests, bishops, a cardinal as well as theologians have expressed their support of female priests. They are following in the footsteps of Maryknoll Roy Bourgeois whose prophetic call for a dialogue on women priests is being heard in more and more places today in our church.

Fr. Roy Bourgeois attended, delivered the homily and participated in the ordination rite of Janice Sevre-Duszynska on Aug. 9, 2008. This resulted in his excommunication and Vatican attempts to pressure Maryknoll to dismiss him from the Order.

"Nothing can stop the movement of the spirit toward human rights, justice and equality in our world and in our church," said Bridget Mary Meehan. "The full equality of women is the voice of God in our time."

The Women Priests movement in the Roman Catholic Church advocates a new model of priestly ministry united with the people with whom we minister. We stand in prophetic obedience to Jesus who calls women and men to be disciples and equals. The movement began with the ordination of seven women on the Danube in 2002. Today there are over 124 in the movement worldwide. ARCWP is in the United States and Latin America. Our specific charism within the broader global Roman Catholic Women Priests initiative is to live Gospel equality and justice for women in the church and in society now. We work in solidarity with the poor and marginalized for transformative justice in partnership with all believers. Our vision is to live as a community of equals in decision-making both as an organization and within all our faith communities. We advocate for a renewal of the vision of Jesus in the Gospel for our church and our world.
Posted by Bridget Mary Meehan at 7:57 AM No comments:

Enjoy this beautiful slideshow of our women priests and deacons serving God's people in inclusive, egalitarian communities in the United States and Latin America. Deacon Donna Rougeux created this prayerful reflection of our call to live Gospel justice and equality in solidarity with the marginalized, poor and oppressed in the church and world.
We wish you a blessed Christmas and New Year.
Bridget Mary Meehan, ARCWP
http://www.associationofromancatholicwomenpriests.org/
Posted by Bridget Mary Meehan at 10:21 PM 1 comment:

"Is it OK to Elect Catholics?" By NEIL STEINBERG /Chicago Sun Times


".... The cardinal might not like it — I’m sure he doesn’t. But plenty of the faithful join the governor in considering themselves good Catholics while conducting parts of their lives in ways “not consistent” with church policy — just last week a survey showed 98 percent of Catholic women use birth control banned by the church. (We’re fortunate that the cardinal has not challenged the governor over which form he uses, at least not yet). Much Catholic doctrine isn’t even followed by Catholics, yet church leaders would dragoon government to force it upon the rest of the state anyway.What Quinn has done to draw church censure — for those of you not up to date — is present an award to a rape victim at a pro-choice dinner, and lead a state whose laws forbid discrimination against citizens due to their sexual orientation, which means the church had to decide whether to place homeless children with gay couples, or get out of the adoption business. It chose to get out of the adoption business — you can debate among yourselves whether that is a choice a loving God would smile upon..."

..."If at election time I were to say, “You can’t vote for Pat Quinn — he’s a Catholic and will be bullied into strictly following church doctrine” — I’d be accused of bias and rightly so. Yet the cardinal is trying to do exactly that, to exercise an authority over public life he does not and should not possess.Quinn attended 13 years of Catholic school — the church already had its chance to mold him. Now he is 63 and an adult. It is Quinn, and not Cardinal George, who gets to decide how his faith influences his life. I’m sorry to be the one to deliver the news."

Bridget Mary's Reflection:
Neil Steinberg hits the nail on the head! How dare Cardinal George bully Governor Pat Quinn to impose the hierarchy's teachings on the Illinois voters. It is true that Catholics follow their consciences on the hot button issues mentioned in the article above, and many dissent from the official teaching of the institutional church.
What the Cardinal George needs to learn is that Pat Quinn and many other Catholics no longer fear the crack of a crozier across the knuckles.
Another example is the Irish Governmentwhich closed the Irish embassy in Rome and is holding the Vatican accountable for the sexual abuse cover-up.
Posted by Bridget Mary Meehan at 10:14 PM 1 comment:

http://open.salon.com/blog/lost_in_berlin/2011/12/16/massive_abuse_scandal_shatters_dutch_catholic_church
"[c]elibacy in itself doesn’t have to lead to rape. But it can give priests and bishops the idea that they are somehow on a higher spiritual plane. That narcissistic spirituality is the dark side of the church, the idea that you are better than others. They set themselves up to be a-sexual beings and that is how they are perceived, by their victims as well. That is what made it such a terrible and lonely experience for them: how could a priest sin? It was inconceivable so nobody believed them. The damage these people suffered at the hands of people who were supposed to be paragons of virtue is incalculable...The scandal has already cost the Catholic Church its influence in Dutch society. According to a report released yesterday, 86% of the population in the heavily Catholic province of Brabant have lost virtually all their faith in the institution."
Posted by Bridget Mary Meehan at 9:12 PM 3 comments:

Join us in Praying a Modern Version of O Antiphons, an Ancient Prayer of the Church, as You Prepare to Celebrate the Birth of Jesus 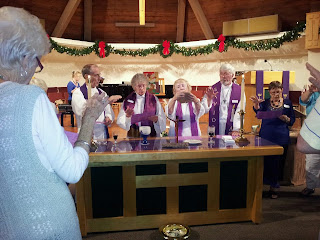 Bridget Mary's Reflection:
A blessed week before Christmas to all! May you experience the presence of God with you and the presence of God within you in all you think, say and do during this sacred time of preparation for the celebration of Jesus' birth!
Bridget Mary Meehan, ARCWP
Association of Roman Catholic Women Priests
http://www.associationofromancatholicwomenpriests.org/
sofiabmm@aol.com
Posted by Bridget Mary Meehan at 12:45 AM No comments: