Will the church move forward with female deacons? Women are what the church needs today Oct 5, 2017 by Pat Perriello, National Catholic Reporter

"It seems a pretty simple question with a logical answer. There is almost no question that female deacons existed in the early church. There is disagreement as to their function, but their existence is not seriously challenged.
At the same time, Pope Francis has made clear that the role of women in the church needs to be enhanced. The language of Evangelii Gaudiumand other statements are clear and positive, but the argument breaks down in practice. The church seems unable to traverse the gulf of its institutional dictates, even though there is no compelling reason to maintain the status quo, and an enormous need to move forward. The church seems unable to pair its lofty language about the value of women with changes on the ground.
The diaconate provides a way to bring women into a more meaningful role in the church without addressing the issue of priesthood. A Vatican commission exists to study this issue, and many in the church are speaking out to promote a positive outcome for this commission. A positive decision might even give the church some breathing room for a while on having to confront the issue of priestly ordination for women.
Fr. Ray Donovan, a leader in the Association of Catholic Priests in Ireland, has called on the church to ordain no more permanent deacons until the commission on women deacons completes its work. He points out that women are already involved in all kinds of ministry yet are given no power or status. He notes personally that women have taught him especially about the compassion and inclusiveness of Christ. His powerful message is that we are "starving people of the richness and nourishment women can bring."
Yet my sense is that the most positive decision that could come out of the current commission on female deacons would be a recommendation for further study. Even that kind of recommendation is not at all assured.
We know the church moves at glacial speed. An even greater concern is what appears to be an organized challenge to much of what has been the message of Pope Francis. The most recent example has been the disinviting of Jesuit Fr. James Martin to speak at several venues, including Catholic University of America.
Consider some of the driving forces to ordain female deacons. The history and the importance of women in our church clearly demonstrate their significance while at the same time relegating them to what could be considered second-class status. Mary Hunt, in her review of Donna Quinn's book, Chicago Catholic Women: Its role in founding the Catholic Women's Movement, highlights several relevant points. Quinn's book recalls that Pope John Paul II told church domestics to be grateful for their role of cooking and cleaning for priests so the men could do their important work. Quinn also notes that Cardinal John Cody forbade Sr. Melinda Roper from preaching in her home parish after the murder of her Maryknoll sisters and colleagues in El Salvador in the early 1980s. Many other examples are provided.
Many Catholics think of Catholic nuns as having had a formative role in their lives, but the role of Catholic lay women is often devalued. Mary Hunt also reviews a work on the international Grail movement by Marian Ronan and Mary O'Brien. The Grail movement is a group of lay women who focused on issues of women and children, including the issue of female genital mutilation. These works on the historical role of women in our church are a critical element of the need to move forward with increasing the dignity and authority of one half of our church.
In a recent NCR editorial, there is a call to swing the doors open for women. There is a need to start somewhere. Either women are going to be brought into their rightful role in the church or the church will remain fixed in the Middle Ages. There is a fear of strong women among much of the hierarchy. Quinn's book notes that the Chicago Catholic women's movement met with bishops during the early days of their ministry in the '70s, but "men became increasingly terrified and embarrassed by the reactions to their outrageous oppression of women." The history of an all-male and celibate priesthood continues to haunt the future of the church.
If the church continues to say no to even the smallest effort to update itself, it diminishes its influence in the world and impoverishes the riches it can offer to its own congregants. It is indeed time to swing the church doors open for women. They are exactly what is needed in our church today."
Posted by Bridget Mary Meehan at 5:32 PM 1 comment:

Here's a link to YouTube with sung version by John Michael Talbot
https://youtu.be/wUbxOli4HcI

Posted by Bridget Mary Meehan at 11:46 AM No comments: 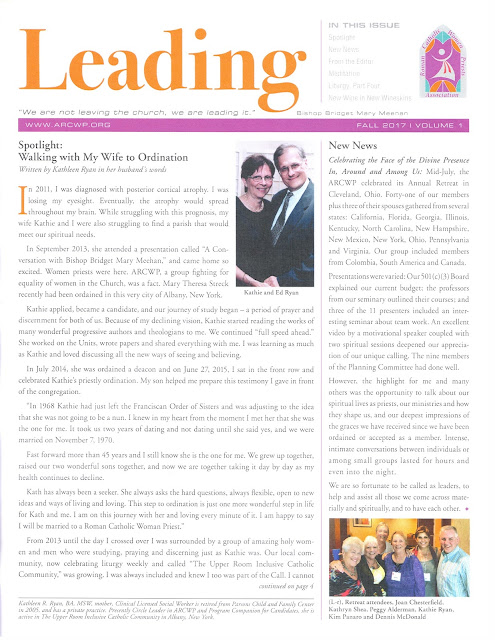 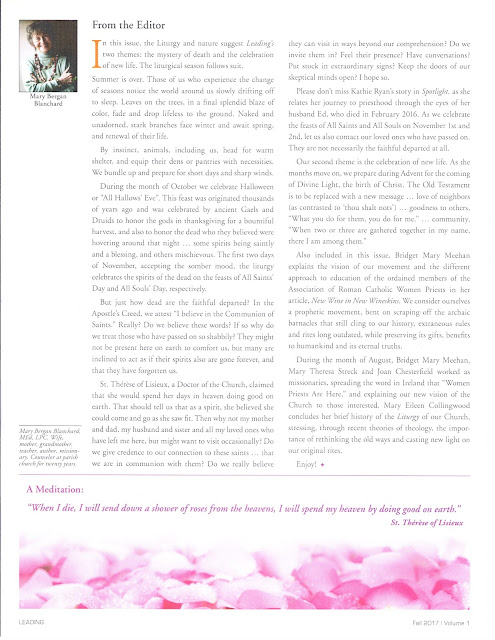 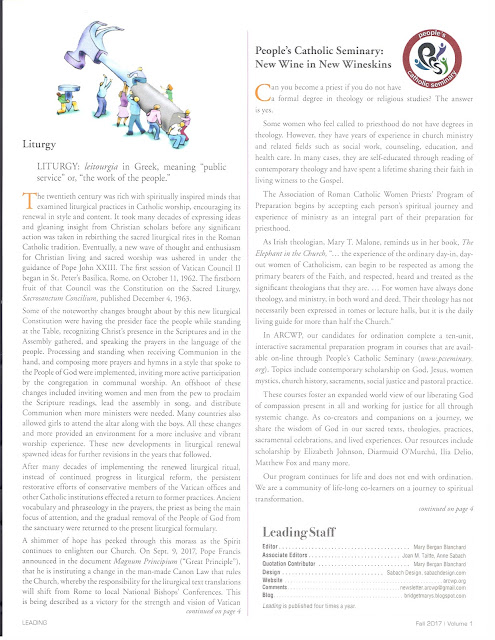 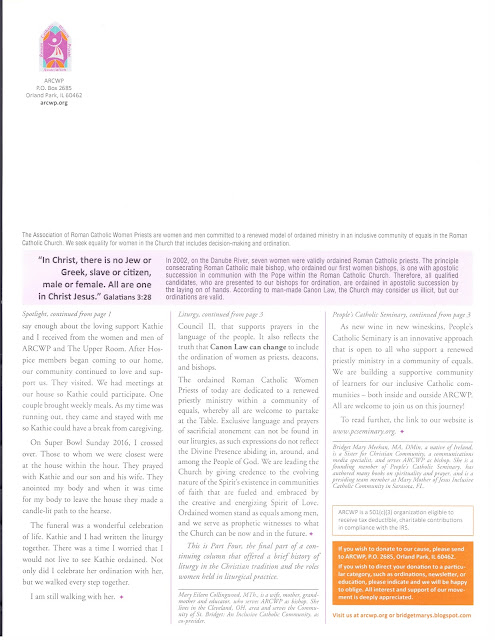 Posted by Bridget Mary Meehan at 9:10 AM No comments: 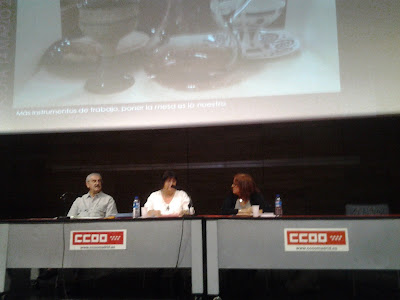