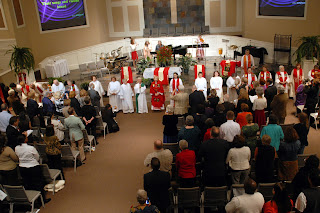 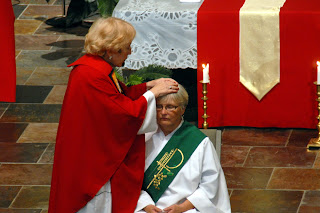 Posted by Bridget Mary Meehan at 4:59 PM No comments:

"This idea was reinforced in 2009 when Pope Benedict XVI altered the Code of Canon Law, specifically Canon 1009, to make an important distinction between the priesthood and the diaconate. The canon reads, "Those who are ordained in the episcopate or presbyterate [priesthood] receive the mission and faculty of acting in the person of Christ the Head. Deacons, however, receive the power of serving the People of God in the ministries [diakonia] of the liturgy, the word, and charity."With this fairly new understanding, Wcela stated, that "iconic maleness is not a requirement for [deacons]," only bishops and priests represent "Christ the Head."
This theology contradicts our baptismal equality and is sexist at its core! Women will not be equals until they are ordained priests in the institutional Catholic Church. Bridget Mary Meehan, arcwp, www.arcwp.org

Posted by Bridget Mary Meehan at 9:35 AM No comments:


You are misleading the faithful.  I am referring to your statements that 1) Catholics should vote “yes” on the Marriage Amendment and  2)They should oppose parts of “Obamacare”, especially the stipulation that a woman’s birth control pills would be covered through her employer’s insurance.


What is most misleading about these two positions is your insistence that a “yes” on the Amendment and a “no” to the coverage of birth control are central to our Catholic faith. Not only do you believe that it is your duty as bishop to instruct the faithful about this faith but in addition, you declare that your struggle is necessary to preserve the “religious liberty” of the Catholic Church.  And there is more. You believe that you are entitled to force your own moral understandings not only on your Catholic “faithful”, but on others who do not share your convictions and beliefs.


I am presently reading a book by a Catholic moral theologian, Margaret Farley.  The title of the book is “Just Love.”  Let me share with you the four sources she expects a moral theologian to use before making a decision.  They are: scripture, tradition, secular disciplines and contemporary experience.


Very little is written in scripture about homosexuality and nothing about birth control.  The tradition of the Catholic Church offers a variety of opinions and practices on both subjects.  Most of these opinions and practices have been shown to grow out of the negative understanding of both sexuality and of women in the long history of our church.  Most scholars in the secular disciplines of psychology, sociology, medicine and education offer a view of homosexuality, women and marriage that differ very much from yours and your brothers in the hierarchy.


In regard to contemporary experience, let me share with you that my husband and I have a daughter, Claudia.  Claudia is married to Lisa.  Together they adopted four children.


In no way does our daughter’s marriage threaten my husband’s and my marriage of  almost 44 years.  These four grandchildren are nurtured and loved and  are thriving just as much our other grandchildren.


Please stop using the resources of the Archdiocese, especially the financial resources, to advocate the restriction of basic human rights and choices.  The message of our brother Jesus has little to do with controlling others’ sexuality and much more with justice and love.

Posted by Bridget Mary Meehan at 9:06 PM No comments:

https://picasaweb.google.com/113861846354577318112/AssociationOfRomanCatholicWomenPriestsARCWPOrdainsSixWomenInAtlanta?authuser=0&feat=directlink
Posted by Bridget Mary Meehan at 11:40 PM No comments:


Live Streaming - Nov 9th; Nov 10th; Nov 11th
Call To Action will offer live streaming video
of all four plenary speakers for those unable to
be with us this weekend. Online viewers should
connect to the above link at 6:45 pm Friday, 10:15 am
and 6:30 pm Saturday, and 8:30 am Sunday. All times Eastern Standard Time. (EST)

"Both friends and strangers have challenged why a Catholic theologian like me would publicly support the re-election of President Barack Obama. The implication always is that my Catholic faith should dictate otherwise.Of course, I cite Catholic social doctrine (note the weighty term) and the mandate of my faith to care for "the least" among us (Matthew 25:34). Social programs for the common good and especially for the most vulnerable are central to Catholic social teaching.By contrast, Ayn Rand's proposal of a "virtue of selfishness," besides being an oxymoron, is the antithesis of Catholic faith. If implemented as social policy -- a la the Romney/Ryan budget -- the neediest among us will suffer by far the most. Some 64 percent of its alleged "savings" come from cutting programs that aid poor families and individuals.The comeback is invariably around abortion, whereupon I explain that my opposition to abortion is precisely the tipping point that prompts my unqualified support of President Obama.As a loyal Catholic, I accept the teaching of my Church that "every human life, from the moment of conception until death, is sacred" and that abortion is "gravely contrary to the moral law" (Catechism of the Catholic Church No. 2319, 2271).

Though the U.S. Catholic Bishops caution, "As Catholics we are not single issue voters" (Faithful Citizenship, November 2007), yet with some 1.3 million annually in the U.S., abortion presents our country with a grave moral crisis.
The dilemma for citizens like me is that the great majority of our fellow Americans favor some possibility of abortion and do not want to criminalize it again.
As Thomas Aquinas taught wisely, laws must reflect "the consensus of the governed" and there is no agreement in this country to ban all abortions. Even Gov. Mitt Romney is now making "exceptions."
When faced with a strategic dilemma in applying a general moral principle, the same Aquinas argued that Christians should choose whatever appears to be the lesser evil and the greater good.
In this light, the most feasible moral choice is to reduce the number of abortions. So, Catholics like me and citizens of like mind should support the candidate who has the best abortion reducing policies.
There is ample evidence that good social programs can dramatically reduce the number of abortions -- and that the lack of them increase it. The Dutch and the Germans have an abortion rate approximately one-third of the U.S. because they have universal health care, including prenatal and postnatal care, and programs to encourage adoption.
All the statistics show a deep correlation between abortion and economic need. More than three out of four women give economic reasons for choosing abortion, and the abortion rate is 300 percent higher among people below the poverty level than those above it.
A fine instance of good social services reducing abortion is the Massachusetts health-care plan that Gov. Romney signed into law before his flip-flop on health care.
It has lowered the number significantly, with a 21 percent decrease among teenagers.
If Gov. Romney makes good on his commitment to rescind the Affordable Health Care Act, coupled with the Romney/Ryan budget proposal that slashes services to poor people, then under a Romney administration, the rate of abortions in the U.S. will skyrocket.
If elected, Gov. Romney would join a line of Republican presidents who campaigned as pro-life but whose social policies increased the number of abortions. The cuts in social services during the Ronald Reagan administration caused the abortion rate to rise dramatically.
President Bill Clinton, by contrast, having campaigned on a pro-choice position, improved social services and the abortion rate declined nearly 30 percent under his administration -- a decline that then stagnated under President George W. Bush.
By way of being truly pro-life, it would seem that presidential Republican candidates are no more than "wolves in sheep's clothing."
Meanwhile, President Obama has made good on the commitment that he personally had inserted into the 2008 Democratic platform (reiterated in 2012), namely to "strongly support a woman's decision to have a child by ensuring access to and availability of programs for pre- and postnatal health care, parenting skills, income support and caring adoption programs."
The current Republican Platform, and certainly candidate Romney, has no such abortion-reducing commitment.
President Obama has signed into law the Pregnancy Assistance Fund -- a $250 million program that helps local organizations support vulnerable pregnant women who wish to have their babies.
He has extended and tripled the Adoption Tax Credit and proposes making it permanent.
He supports the Child Tax Credit, which the Romney/Ryan budget would cut. Going forward, his overall social policies and affordable health care will insure that the U.S. rate of abortions will decline significantly.
No one could reasonably assert that my Catholic faith requires me to vote for one or another candidate in this election. However, my Catholic conscience prompts me to support President Obama as a practical strategy to reduce abortion in America."
THOMAS GROOME is a professor of Theology and Religious Education at Boston College and a National co-chairman of Catholics for Obama.
Posted by Bridget Mary Meehan at 8:03 PM No comments:

Presentation of Chalice and Paten
http://www.youtube.com/watch?v=AJ9CY2SKMqo 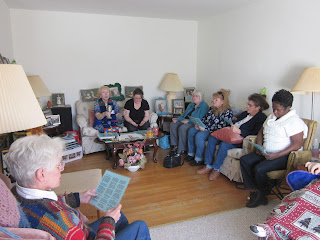 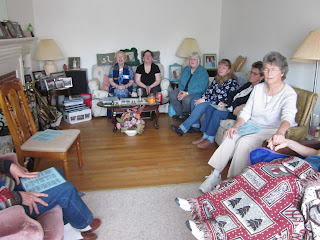 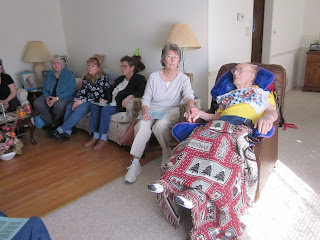 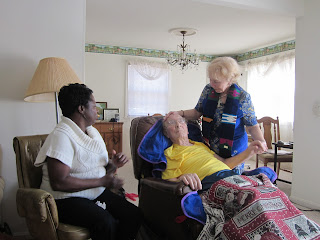 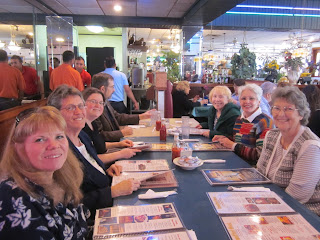 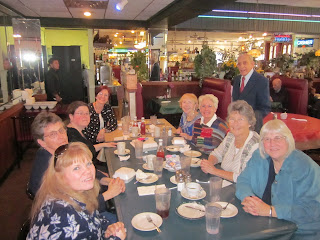 On Sunday Nov. 4th, a gathering of the ARCWP community and friends in Falls Church.
We celebrated a liturgy, followed by a viewing of Pink Smoke and a luncheon at the City Diner in Falls Church, VA.


Posted by Bridget Mary Meehan at 5:39 PM No comments: