"On the west coast of Florida, a small group of Catholic women priests is saying mass in defiance of the Vatican" 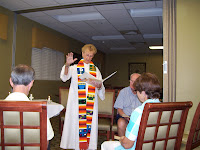 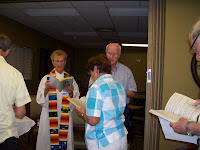 ESTERO — "Like the first Christians, they are outcasts. They meet in private homes and sympathetic Protestant churches.

They are a small band of women priests and the people who believe that they can melt the rock-solid determination of the Vatican to keep the Catholic priesthood all male..."

"...Dena O'Callaghan, 73, ordained two years ago, remains upbeat in the face of every new Vatican pronouncement. She is certain that the church will eventually change its position on women priests.

"Gosh, if I didn't believe that, I'd have no vision," said O'Callaghan.

A group of about 25 people, including several women priests, several husbands and other supporters of the movement, met in Estero on July 22, the feast day of Mary Magdalene, the first person to see the risen Christ. They call her the apostle to the apostles.

O'Callaghan officiated at the Mass, assisted by her husband, John O'Callaghan, a priest who was suspended from official ministry when they married in 1996."....

"The Vatican’s directive confirming its policy of excommunication for those involved in the ordination of women has been greeted with defiance by dissidents in the US and dismay by Irish campaigners...

Bishop Bridget Mary Meehan is a leader of an ever-growing band of dissidents from this policy. She is “happy to be excommunicated. If they keep going like this there’ll soon be more ‘out’ than ‘in’. We’re at the heart of the church, renewing it. We’re not going to put up with second-class membership any more. We are an empowered community of Catholics. Mysticism and social justice are in my DNA as an Irish Catholic. I love the faith, but this corrupt church has to be reformed. Where are the excommunicated paedophiles or bishops who covered up the abuse of children?...”

The equation of female ordination with pedophilia fits a Vatican pattern.

"We might come to understand the present and anticipate the future by studying the past. And so the recent Vatican announcement equating the ordination of women with pedophilia should be seen in the context of the church's pervasive and persistent clerical misogyny throughout its history"...

..."church fathers - ranging from Tertullian to Jerome to Thomas Aquinas to the recent popes - have held in one way or another that women are unfit for the priesthood. This is due either to their inherent inferiority of character or to their lack of male body parts..."

Posted by Bridget Mary Meehan at 12:00 PM No comments:

"A new priests' movement is being planned to push for a reformation within Irish Catholicism, The Irish Catholic has learned. The push, which will include a call for the Church to re-evaluate its teaching on sexuality as well as ''an equal place for women in all areas of Church life'' is the brainchild of three prominent priests."

"In a statement to The Irish Catholic, the three, Fr Tony Flannery, Fr Brendan Hoban and Fr Sean McDonagh said ''the consensus was that, due to the diversity of opinion among priests, it would be impossible to represent all clergy."

I congratulate Fr. Tony Flannery, Fr. Brendan Hoban and Fr. Sean McDonagh for their courage in initiating a reform movement in Ireland. This is a very hopeful sign. Even if you stir up a hornet's nest of opposition by the hierarchy and/or by the Vatican. It is time that, we the people, including our male and female priests resist the oppression and take back our beloved church! My prayers are with you!
Bridget Mary Meehan, RCWP
sofiabmm@aol.com
703-505-0004
Posted by Bridget Mary Meehan at 10:58 PM 5 comments:

Archbishop Dolan/"You cannot Justify the Vatican's Attack on Womenpriests,; Sexism is a Sin"

Singling out The New York Times, Archbishop Timothy Dolan of New York blasted media coverage of the Vatican’s revised norms for the clerical abuse of minors and other exceptionally serious crimes.

...“It is a source of consternation as to why, instead of complimenting the Vatican and a reformer like Pope Benedict XVI, for codifying procedures long advocated by critics, such outfits would instead choose to intrude on a matter of internal doctrine, namely the ordination of women.”

Archbishop Dolan, "you cannot justify the Vatican's attack on Womenpriests. Sexism is a Sin. It is time to follow Jesus example of Gospel equality. Jesus did not ordain anyone . The Vatican's Pontifical Biblical Commission in 1976 concluded that there is nothing to prohibit women's ordination in the bible. The emperor has no clothes! Stop blaming the New York Times.

The ordination of women is not a crime. It is a disgrace that the Vatican would come out with such a mysogynist statement. It is absolute theological nonsense, and you know it!

We will endure and justice will triumph!

We love the church and are in the process of changing it into a renewed vibrant, people-empowed model in grassroots communities.

"Vatican Must Not Be Granted Immunity from Equality Legislation" by Mary Condren/Irish Times/ Live Dream Now!

ANALYSIS:" The Vatican must no longer be granted immunity from equality legislation, in the name of liberty, equality, and even the Gospel, "writes MARY CONDREN

"THE VATICAN’S recent Normae de Gravioribus Delictis document prescribes automatic excommunication for anyone involved in the ordination of a woman. In according greater penalties to those who “attempted” women’s ordination than to clerics who abused children, it has further shocked many loyal Irish Catholics, prompting them to inquire about the theological reasons why the Roman Catholic Church objects to women’s ordination."

I agree completely with Mary Condren The Vatican decision to classify women's ordination as a grave crime against the sacraments is the last straw for the majority of Catholics who believe in Gospel equality. Sadly, the Vatican is creating a toxic atmosphere for women in the church and unintentionally caused a tipping point. One woman who emailed me recently said that she could no longer go to her local parish because the church was too toxic.

Likewise, recently, a young woman who completed twelve years of Catholic School, recently gave me a "high-five" for challenging the Vatican's condemnation of womenpriests. RCWP is offering hope to people today who live in a world where partnership is the norm and equal pay for equal work is the law.

Womenpriests are visible reminders that women are equal images of God. We are not defective males unworthy of presiding at sacramental worship as St. Thomas Aquinas taught. God created women and men in the divine image. Who are the men in the Vatican to treat women as inferior, not capable of imaging Christ as a priest simply because we are not male? What a sexist view of the subordination of women!

Women and men of the church, join us on the long march to freedom, justice and equality. Let us gather with kindred supporters from all faiths and no faith who walk in solidarity with us from around the world. Let us proclaim as St. Paul wrote in Galations that in Christ, "there is neither male nor female, all are one..." Let us pray, demonstrate and work for the renewal of our church of a renewed priestly ministry in a community of equals. Let us live as if this dream is a reality in our grassroots communities as we become the church of our dreams!. Then sooner or later, the Vatican will catch up and embrace the full equality of women as the Body of Christ in all ministries in our church including Holy Orders!