We Are Church Ireland Is Launching this Petition to Pope Francis to CHANGE CHURCH LGBTQI LANGUAGE.

The We Are Church Ireland group, with Ursula Halligan, Padraig O Tuama, and David Norris, is organizing a number of events for lay LGBTQI+ Catholic Activism, and launching with this petition this week as preparation for the gathering of families and Pope's visit to Ireland.
You can read more and sign the petition here:https://chn.ge/2LprT0B” 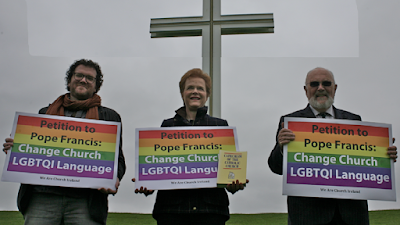 We Are Church Ireland started this petition to Papal Nuncio to Ireland Archbishop Jude Thaddeus Okolo and 1 other
Pope Francis has said about gay people "Who am I to judge?" But the Catholic Catechism still refers to LGBTQI as "objectively disordered."Would Jesus use these words?Pope Francis is to visit Ireland 25-26 August 2018 and we are calling on him to change church LGBTQI language.
Pádraig Ó Tuama, Ursula Halligan & David Norrissupport this petition
We feel it is imperative for us to boldly speak out against Catholic Church officials' continued insistence on calling the LGBTQI community’s “inclinations” as “objectively disordered” (Catechism of the Catholic Church, 2358), or even worse, “ordered toward an intrinsic moral evil” (Letter to the Bishops of the Catholic Church on the Pastoral Care of Homosexual Person, 1986). The Catholic Church’s formal language to describe our LGBTQI sisters and brothers makes the institutional Church complicit in the marginalisation of LGBTQI people. Under the guise of religion and faith, the Church models intolerance, breeds prejudices, and attempts to justify discrimination. We call on the Church to formally change its language about the countless LGBTQI people whose lives benefit the church and who are impacted by such diminishing language.
Pádraig Ó Tuama Leader - The Corrymeela Community “As a gay Catholic, I do not recognise myself in the language used about me in the church’s documents or teachings. The gospels depict the dignity of humanity, especially those who were castigated or marginalised. The Church would be more faithful to its witness to use language that builds bridges rather than diminishes dignity.”
Ursula Halligan Journalist in Residence, DCU "Why does the hierarchical Catholic Church continue to use such horrible language in its catechism and official documents about LGBTQI people? If a business or company were to use such language, they would be publicly reprimanded and penalised by the state. The hierarchical church needs to wash its mouth out before speaking about LGBTQI people".
Senator David Norris As a believing and church going Christian I have to say that the history of the Christian churches in relation to gay people is a shocking record of criminality and brutality. At the instigation of the churches gay people have been routinely ostracised, tortured and murdered. It is unacceptable that there should be any continuation of the savage and insensitive language employed by some of the churches in dealing with gay people. It is salutary to remember that Jesus Christ not once mentions or condemns homosexuality.
Cardinal Luis Antonio Tagle, Archbishop of Manila, has lamented the “harsh words” that the Church used about gay and divorced people in the past, saying it left them feeling “branded”. [Flame 2 Youth Congress, Wembley, 2015]
Cardinal Oswald Gracias, Archbishop of Mumbai: “Let us use gentler language, not judgmental language.” [Interview with New Ways Ministry, 19 October 2015]

Posted by Bridget Mary Meehan at 12:52 PM No comments:

"The Vatican's affirmation of its ban on women priests as 'definitive' teaching rests solely on patriarchal church authority. In doing so, it denies the workings of the Spirit within the people of God."-- Bridget Mary Meehan https://www.ncronline.org/news/people/advocates-dismayed-reaffirming-ban-women-priests … via @ncronline
0 replies0 retweets0 likes

Janice Sevre-Duszynska is engaged by Italian police as she approaches the Vatican during a demonstration for women's ordination in 2011. (CNS/Paul Haring)
Advocates for the ordination of women in the Roman Catholic Church said they are "deeply dismayed" by a newspaper article penned by the Vatican's doctrinal chief that reaffirmed the church's ban on women priests as "definitive" and "a truth belonging to the deposit of faith."
"Archbishop [Luis] Ladaria's arguments are unconvincing and simply nothing new," said a statement from the Women's Ordination Conference, following the release of Ladaria's article. "How long can the Vatican hide behind its sexist arguments that because Jesus was a man, he intended only men to become priests?" the statement read.

web 20180521T1337-17380-CNS-CARDINALS-THUMBNAILS.jpgWriting for the May 30 issue of the Vatican newspaper L'Osservatore Romano, Ladaria, prefect of the Congregation for the Doctrine of the Faith, said that Jesus decided to reserve the sacrament of priestly ordination "to the twelve apostles, all men, who, in turn, communicated it to other men."
"The church has always recognized herself bound by this decision of the Lord, which excludes that the ministerial priesthood can be validly conferred on women," Ladaria writes.
Ladaria's article, "The definitive character of the doctrine of 'Ordinatio sacerdotalis,' " re-examines Pope John Paul II's 1994 apostolic letter that outlined the reasoning behind the ban on the priestly ordination of women.
The archbishop said he decided to write "in response to doubt" about John Paul's teaching, adding that expressing doubt about the barring of women from the priesthood "creates serious confusion among the faithful."
"The only 'serious confusion' among the faithful is just how long the Vatican will continue to parade indefensible arguments that attempt to limit the reaches of God's call," Kate McElwee, executive director of the Women's Ordination Conference, told NCR.
According to British theologian John Wijngaards, "Yes, there is confusion among the faithful, but not because they doubt the validity of their inner sense of what is genuinely Christian and Catholic, but because the persons who are supposed to guide them keep ignoring their just concerns."
"Confusion is healthy if it leads to a process of honest reassessment," added Wijngaards, professor emeritus of Missionary Institute London and founder of the Wijngaards Institute for Catholic Research.

Archbishop Luis Ladaria (CNS/Paul Haring)
Statistics have shown that a majority of educated Catholics believe women should be ordained, he said. "Their belief stems not from theological studies but from their 'Catholic sense,' their considered judgment that Jesus, who always treated women like the men, would not ban women from ordination in our present world."
"This sensus fidei is at the foundation of the teaching authority of the whole church, a foundation hierarchical leaders should take note of in any magisterial decision," he said.
In his essay, Ladaria, who is to be made a cardinal by Pope Francis June 28, addresses the debate over the character of John Paul's Ordinatio Sacerdotalis, especially the question of whether it is to be considered an infallible papal teaching.
Ladaria argues that although John Paul did not formally proclaim the teaching ex cathedra — as outlined by the First Vatican Council document Pastor Aeternus as part of the process of a pope declaring something infallibly — the pope "formally confirmed ... what the ordinary and universal magisterium considered throughout the history of the Church as belonging to the deposit of faith."
"To hold that it is not definitive, it is argued that it was not defined ex cathedra and that, then, a later decision by a future Pope or council could overturn it," he stated. "Sowing these doubts creates serious confusion among the faithful, not only about the Sacrament of Orders as part of the divine constitution of the Church, but also about the ability of the ordinary magisterium to teach Catholic doctrine in an infallible way."
Wijngaards told NCR: "As history shows, many popes have made statements they believed to be 'definite,' which have turned out to be flawed. The 'definitive' character of a papal statement does not only derive from the intention of the pope in question. It is intimately linked to its context."
According to Wijngaards, Ordinatio Sacerdotalis does not fulfill the five criteria of an infallible decision by the "ordinary and universal magisterium," as outlined by the Jesuit theologian Karl Rahner.
"Ordinatio Sacerdotalis," he said, "first, was not a collegial exercise of the teaching authority. Second, the bishops of the world had not acted as judges. Third, they had not listened to the ordinary faithful. Fourth, the issue in question does not involve revealed faith or morals. Moreover, fifth, the bishops of the world had not wanted to impose a final judgment on the matter."
He continued, "The belief that only men can be priests because all the 12 apostles were men is scripturally unsound. The appeal to an 'unbroken tradition' of excluding women is as faulty as asserting that the world was created in six days because the fathers of the church, medieval theologians and all bishops thought so."
The statement from the Women's Ordination Conference also notes that even in his 1994 document John Paul acknowledged the question of women's ordination was "at the present time in some places … considered still open to debate."
"The continued presence of a strong movement clamoring for the ordination of women shows that Ordinatio Sacerdotalis is far from definitively held as doctrine by the faithful of the Church," the statement said.
McElwee told NCR, "While the institutional church continues to reject and dismiss the priestly vocations of women, communities of Catholics recognize women's gifts and walk with them on a path of radical inclusion."
Among those walking "a path of radical inclusion," is Bridget Mary Meehan, one of four bishops in the Association of Roman Catholic Women Priests movement and pastor of the Mary Mother of Jesus Inclusive Catholic Community in Sarasota, Florida. The Association of Roman Catholic Women Priests claims about 250 priests worldwide.
"The Vatican's affirmation of its ban on women priests as 'definitive' teaching rests solely on patriarchal church authority," Meehan said. "In doing so, it denies the workings of the Spirit within the people of God."
"The Vatican's affirmation of its ban on women priests as 'definitive' teaching rests solely on patriarchal church authority. In doing so, it denies the workings of the Spirit within the people of God."
-- Bridget Mary Meehan
Tweet this
Janice Sevre-Duszynska, ordained a Roman Catholic Woman Priest in 2008, said, "Our movement is growing with enthusiasm among Catholics in grassroots communities, especially with marginalized LGBTI and divorced [Catholics], and all who seek a bigger table where God's beloved family gathers to celebrate sacraments and to serve their sisters and brothers in mutual love in a community of equals."
Both women priests noted that Ladaria's newspaper article coincides with the 10th anniversary of the Congregation for the Doctrine of the Faith issuing a general decree excommunicating the members of their movement and its supporters. The decree stated, "Both the person who attempts to confer holy orders upon a woman, and the woman who attempts to receive holy orders, incur the excommunication latae sententiae [automatically]."
The decree doesn't mention the group or its members by name, but it followed a number of high-profile ordinations of women that year and the year before.
"Why [bring this up] now, 10 years later?" Meehan asked NCR. "What's up with that? Maybe they want us to issue a progress report."
Tell them, she said, "Yes, we keep growing and flourishing."
[Dennis Coday is NCR editor. His email address is dcoday@ncronline.org. Vatican correspondent Joshua J. McElwee contributed to this report.]
This story appeared in the June 15-28, 2018 print issue under the headline: Vatican's doctrinal prefect reaffirms ban on women priests .
Posted by Bridget Mary Meehan at 8:37 AM No comments: