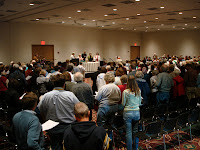 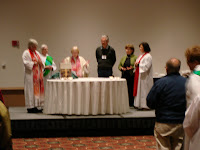 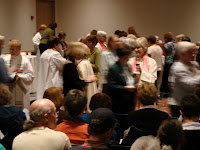 I wrote this article on the historic occcasion of the Vatican excommunications. The New Catholic Times published the article and added stunning graphis. Enjoy!!

Report of Women's Ordination's Conference's on Successes at Vatican Synod

St. Praxedis Church in Rome ( Mosaic of Episcopa (bishop)Theodora on the far left, standing next to St. Praxedis, who was pastor of this house church 800 years earlier, Mary, Mother of Jesus, and Pudentiana)

Advocates of women's ordination share educational materials on women office holders in the early Church.
(Pictures used with permission of Women's Ordination Conference)
Dear WOC Members and Supporters,
We have returned to Washington, DC after an incredibly successful campaign in Rome during the Synod of Bishops. I am thrilled to share with you photos from our campaign, as well as an update on all of our actions in Rome.
During the week, we held a press conference and demonstration, hosted an educational forum on women office holders in early Christianity, and toured archaeological sites of significance. WOC's actions garnered worldwide attention, not the least from the Italian police, who followed and detained us each time we held an event in St. Peter's Square. They even seized our passports, which they returned after recording our names and passport information. Despite this harassment, WOC witnessed for women's ordination and accomplished the following:
Generated international media coverage of the women's ordination movement in more than 100 media outlets around the world, including Associated Press, International Herald Tribune, Univision, and the major press agencies in Germany and Italy. News of our campaign reached Austria, Canada, New Zealand, Australia, Nicaragua, the U.K., Vatican City and more (see below for details).
Distributed over 1,000 stickers and over 600 fliers to visitors in St. Peter's Square, including many priests and women religious.
Raised public awareness around Rome and in Vatican City, by carrying our banner and by wearing "Ordain Women" t-shirts in nine languages.
Educated Catholics about the archaeological sites depicting women's leadership in early Christianity by arranging a slide show presentation and organizing a tour of the sites.
Throughout the week, we and our coalition partners became well-known in Vatican City. We were highly visible, holding a banner stating "Ordain Catholic Women," wearing our purple stoles, and sporting "Ordain Women" buttons and t-shirts in English, French, Gaelic, German, Italian, Japanese, Korean, Portuguese, and Spanish. All along our route, we handed out fliers in six languages citing the reasons to ordain women. Hundreds of women and men smiled and nodded to us, and we educated many about WOC and the need for women's ordination.
Our conversations with Roman Catholics from around the world reinforced what we knew all along - that a majority of Catholics the world over support women's ordination. We engaged in noteworthy dialogue with three young seminarians, who by the end of our conversation, agreed that women's ordination should at the very least be open for discussion.
In addition to the demonstrations in the public square, we hosted an educational forum on women's leadership as priests, deacons and bishops in early Christianity with the kind and generous help of a coalition partner, and toured both the catacombs of Priscilla and the Basilica of St. Praxedes (check out pictures in our gallery).
After our tour, we stopped by the Basilica of Santa Maria Maggiore, where Cardinal Bernard Law serves as archpriest. A pre-Vatican II Mass in Latin was in session, and we decided to participate. With the cardinal's back to the people and separated by a chain gate, Erin and I put on our purple stoles and "Ordain Women" buttons and stepped up for communion. We drew a few interested stares, but received Eucharist without incident.
Regrettably, we did have an incident back at the apartment where we were staying. In the middle of the night, burglars broke into the apartment and stole our laptops, camera, iPod, cellular phone, and cash. We are blessed that no one was injured - we did not awaken during the break-in. While this burglary was upsetting and inconvenient, it was not enough to stop our work. We carried out all of our campaign activities as planned.
WOC's campaign succeeded beyond our expectations, and our presence reverberated throughout the streets of Rome. On our final day in St. Peter's Square handing out literature on women's ordination, Erin and I were detained one final time. When we told the Italian police officer that we were headed back to the U.S. the following day, he shouted, "Thanks be to God!" We took it as a compliment. Our hard work had paid off, as the Vatican had taken notice of our campaign.
Thank you for supporting us during our campaign in Rome. This could not have happened without the support of members and allies of the Women's Ordination Conference like you. A few weeks ago, many of you received a letter asking you to renew your membership with WOC. Many of you have responded, and we thank you so much! Your membership contributions and gifts throughout the year keep our work going. If you have not yet made a contribution, please consider making a donation today so that we can continue our campaigns.
Thank you for your prayers and support! You made this trip possible, and we hope you enjoy the pictures and campaign updates.
In peace and struggle,
Aisha S. Taylor, Executive Director
(Ree Hudson, from St. Louis, represented Roman Catholic Womenpriests in this worldwide campaign.)

Posted by Bridget Mary Meehan at 9:12 PM No comments:

At its annual meeting in Chicago October 10-12, 2008, Women-Church Convergence denounced all threats to and violations of conscience perpetuated by leaders of the Roman Catholic Church. The Convergence affirmed the right of all Catholics to act in the areas of faith and morals on the basis of a well-informed conscience.

Several examples scandalized us of late:
1. Louise Lears was removed from the pastoral team of St. Cronan's Parish by Archbishop Raymond L. Burke of St. Louis, Missouri, for her support of the ordination of Roman Catholic Womenpriests. He placed her under interdict, prohibiting her from the reception of the sacraments in that diocese. This is direct retribution for an act of conscience.
2. Roy Bourgeois received a canonical warning and was asked to explain to his Maryknoll Community the facts of his participation in an ordination sponsored by Roman Catholic Women Priests. A report of the order's investigation was sent to the Congregation for the Doctrine of the Faith. This contradicts freedom of conscience.
3. During this election season, several politicians have been threatened with excommunication by bishops who disagree with their principled stances on controversial issues. These are attempts to politicize a Catholic's right in conscience to receive the Eucharist.

Women-Church Convergence urges all Catholics to resist the hierarchy's intrusions on conscience. Women-Church creates and supports communities in which conscience is respected. The Convergence is made up of representatives of twenty-six Catholic-rooted feminist groups and organizations.
A Coalition of twenty-six Catholic-rooted, feminist organizations and groups affirmed the fact that they strongly encourage all Catholics to vote according to their consciences and not dictate in the upcoming November elections. Peace, justice, and opposition to war are the hallmarks of Catholic social teaching. We urge all Catholics to embrace this widely accepted agenda, not any single issue, and vote accordingly.

Women-Church Convergence unanimously approved of this at their recent annual meeting held in Chicago on October 10-12, 2008.
Posted by Bridget Mary Meehan at 5:12 PM 2 comments: