Morag Liebert and Bridget Mary Meehan after ordination ceremony. Morag's chasuble has images of St. Catherine on the front and St. Margaret, Queen of Scotland on the back.

On Oct.24th, 2009, Morag Liebert was ordained a Roman Catholic Womanpriest in a historic ceremony in the city of Edinburgh. Morag was ordained by Bishop Bridget Mary Meehan/ United States.
The ordination is part of the Roman Catholic Womenpriests movement. This movement is building a renewed model of priesthood for a renewed Church to achieve full equality of women and men.
Morag Liebert has a M.A. in biblical studies and moral philosophy, a post graduate
degree in education and a B.D. with honors in Divinity.
She has been a member of Catholic Women's Ordination for fifteen years and currently leads its Edinburgh group. Morag has worked as a volunteer for the past eight years with an organization which helps abused women. For three years she organized the Lent study groups for Newington Churches Together, an ecumenical asssociation of churches in South Edinburgh.
Rev. Frances Forshaw, an Episcopalian priest in the Scottish Episcopal Church, who is part of the clergy team at St. Ninian's Cathedral in Perth, and Rev. Louise Mc Clements,an ordained minister from the local area participated in the ordination ceremony.
Jennifer Stark from York, England was the minister of music. Katherine Salmon, from Sheffield, England, presented Morag for ordination.
Joanna Hanley, from Edinburgh, was the official photographer.
For more information about liturgies, contact Morag Liebert moragl@connectfree.co.uk
Also see:
www.romancatholicwomenpriests.org
More photos and movies to come!
Posted by Bridget Mary Meehan at 5:07 PM No comments:

Ordination of RCWP women bishops in California (historical note: A male Roman Catholic bishop with apostolic succession/in full communion with the pope, ordained Bishops Christine Mayr-Lumetzberger and Patricia Fresen, who in turn ordained our women bishops in Europe and the U.S., making our ordinations valid, but in violation of an unjust canon law that discriminates against women.)

VATICAN CITY — "In an extraordinary bid to lure traditionalist Anglicans en masse, the Vatican on Tuesday announced that it would make it easier for Anglicans who are uncomfortable with their church’s acceptance of women priests and openly gay bishops to join the Roman Catholic Church."
http://www.nytimes.com/2009/10/21/world/europe/21pope.html?hp

My Comment:
This latest decision by the Vatican appears to set up more "personal ordinariates" in communion with the Roman Catholic Church similar to the Byzantine Rite which retains their own Eastern liturgy, prayers, and practices such as a married priesthood etc.

One positive outcome: This Vatican action sets a precedent that one day can be used for the acceptance of Roman Catholic Womenpriests. (my guess: twenty years or less, see yesterday's post for a creative hopeful view of this total transformation which of course will adopt our RCWP inclusive liturgies!)

Right now, there is no doubt about the hostile attitude of the Vatican toward women priests and openly gay bishops. I don't understand this negative attitude toward gays when so many Roman Catholic priests and bishops are gay. Read Monsignor Cozzens' book, http://www.amazon.com/s/ref=nb_ss_0_13?url=search-alias%3Dstripbooks&field-keywords=sacred+silence&sprefix=Sacred+silenc

This Vatican outreach to married Anglican priests will certainly expand the married Catholic priesthood, but what about our married Roman Catholic priests? After all, Peter was married. Why does the Vatican insist on this mandatory discipline? Jesus didn't require celibacy of his male or female disciples. There are over 25,000 married Catholic priests in the U.S. alone. This is an injustice to them. Unless, the pope is going to dispense with this rule, and this is his prelude.

Other major questions: what impact will the Vatican's embrace of Anglican Tradtionalists have on relations between the two churches and how will it affect the Anglican-Roman Dialogue? Will it be a major setback or for the Anglicans a solution to a vexing series of problems?

George Pitcher stated in his article in the Telegraph, can this be seen as a positive step: "Pope Benedict has thrown them a timely lifeline. He has also thrown one to Dr Rowan Williams, Archbishop of Canterbury. The issue of women bishops, approved by the Church of England’s Synod, was running into the sand, with a controversial proposal this month to impose a two-tier structure, with male bishops still having oversight in dioceses over those Anglicans who couldn’t accept women’s episcopacy. Women priests quite rightly resisted the suggestion that they would be second-class bishops."
http://blogs.telegraph.co.uk/news/georgepitcher/100014200/pope-throws-a-lifeline-to-the-church-of-england-for-women-bishops/

Indeed, as my 85 year old Irish father, Jack, concluded after watching a news story tonight on the Pope's welcoming of Anglican Traditionalists into the Roman Catholic Church:"This is really blatant discrimination against women priests." Yes, Dad, among other things...!

Perhaps, many more open-minded, progressive Roman Catholics will decide that they want womenpriests now. One in ten Catholcs in the U.S. is a former Catholic. There are many faith communities without priests in the U.S,and this topic is definitely on the table! I am convinced that there are many women called to serve God and their communities as priests. Roman Catholic Womenpriests are ready to serve wherever there is a need. The world is our parish and our numbers are growing.

"The connections between and among women are the most feared, the most problematic, and the most potentially transforming force on the planet.."Adrienne Rich.

Our challenge as women priests and bishops is to continue to follow Jesus' example of Gospel equality, form Christ-centered inclusive communities where all are welcome, and none are turned away from the Sacred Banquet. The story of the Samaritan woman demonstrates that everyone is invited to drink the living water and belong to the community of faith. There are no outsiders. All that is required is that we worship in spirit and truth. It is mind-blowing that Jesus revealed his identity as Messiah and who God is to an outsider, a foreigner, and a woman living with a man who is not her husband. In this encounter Jesus goes beyond the religious taboos of his time. He breaks the rules. In spite of all the negatives of her situation, Jesus chose the Samaritan woman to evangelize her town. This story challenges church leaders to break the bondage of patriarchy and sexism, and to follow Jesus' example by ordaining women as leaders in an inclusive church.

Justice is an issue for all- including women in all religious traditions. May Roman Catholic and Anglican womenpriests and bishops support one another as we make justice a reality for women in the church. I look forward to the ordination of Anglican women bishops. We are companions on a journey breaking our churches' glass ceilings!

Perhaps, we should be grateful to Pope Benedict, for heaping more coals on the fire for justice and equality for women in the church. Indeed, the full equality of women in all areas of life, including religion, is the call of God in our time!
Bridget Mary Meehan, rcwp
sofiabmm@aol.com
703-505-0004
www.romancatholicwomenpriests.org

BBC Report
Groups of Anglicans will be able to join the Roman Catholic Church but maintain a distinct religious identity under changes announced by the Pope.

"The measure, known as an Apostolic Constitution, was shown to leaders of the Church of England just two weeks ago.Under its terms announced by the Vatican, groupings of Anglicans would be able to join "personal ordinariates".

This would allow them to enter full communion with the Catholic church, but also preserve elements of the Anglican traditions including the possible use of Anglican prayer books."
http://news.bbc.co.uk/2/hi/uk_news/8316120.stm

Posted by Bridget Mary Meehan at 3:42 PM No comments:

Roman Catholic Womenpriests : The Vatican will accept Womenpriests like it has Archbishop Lefebvre's followers 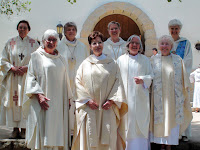 It has taken the Vatican approximately 20 years to reverse itself on the Society of Pius X. In 2009, the Vatican has reversed itself. Under Pope Benedict XV1, the followers of Archbishop Lefebvre are being warmly welcomed by the Vatican, and their traditionalist agenda is being promoted. (return to the old Latin Mass with priest facing altar, not the people.

"The following day, July 1, 1988, Cardinal Gantin issued a formal decree of excommunication announcing that Lefebvre, Castro Mayer, and the four new bishops had performed a schismatic act and excommunicated themselves in accordance with the provisions of the Code of Canon Law. The following day, July 2, 1988, Pope John Paul II issued an apostolic letter Motu Proprio "Ecclesia Dei" in which he solemnly confirmed both the excommunications and the existence of the schism.

The pattern/strategy of the Vatican was: ignore, condemn, excommunicate, dialogue, "un-excommunicate!", promote agenda of group, incorporate changes into life of universal church!

I believe the hierarchy will follow a similar pattern with Roman Catholic Womenpriests.

In twenty years, or less, imagine the scene in St. Peter's when Roman Catholic Womenpriests are welcomed by the Vatican to celebrate an inclusive liturgy at an international gathering of God's people who have been living the vision of a renewed priestly ministry in a community of equals for years. Perhaps, it will occur as part of Vatican 111 which will be called by the grassroots church!

After lifting our excommunications, and engaging in "dialogue" with Roman Catholic Womenpriests, the Vatican will promote our vision of an egalitarian church as rooted in Jesus' example, and the twelve hundred year church tradition of women in ordained ministry. They will explain the positive contributions that women priests are bringing to a global church. Of course, the institutional leadership, which will not be by this time dominated by clerics, will have come full circle, and equal partnership, justice for all will be its top agenda! The new Roman Missal will adapt our liturgies and new eucharistic prayers for official worship and many will rejoice that finally the liturgy utilizes inclusive language including feminine images of divinity!

What else do you think will happen? How will the church grow?

Posted by Bridget Mary Meehan at 10:36 PM No comments:

"She based her egalitarian call on the gospel story of Jesus’ encounter with the Canaanite woman, a piece of scripture that has served at the anchoring text for a nine-day meeting at a conference center 30 miles outside of Bangkok.

Posted by Bridget Mary Meehan at 2:29 PM No comments: