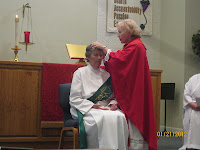 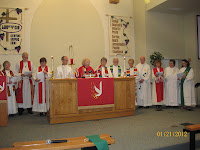 Judy Beaumont's Ordination Will Be On Live Streaming on Sat. Jan. 21st. 2012- 3PM-5PM,The Association of Roman Catholic Women Priests Leads the Church Toward Justice and Equality

http://www.lambofgodchurch.net/
3pm to 5 pm (approximately) Sat. Jan. 21, 2012
Watch history in the making live!Go to videos on left hand side and the live streaming will come up.

http://www.news-press.com/article/20120115/NEWS0110/301150049/1014/business/Fort-Myers-woman-defies-church-ordained-Roman-Catholic-priest?odyssey=nav%7Chead
The News-Press
"Judy Beaumont plans to take a historic step Saturday, one that will jeopardize her immortal soul.

Beaumont, 74, of Fort Myers, is defying centuries-old doctrine in becoming the first woman in Southwest Florida to be ordained a Roman Catholic priest. The church decrees this role is reserved for men. Bishop Frank Dewane of the Diocese of Venice, which oversees the Catholic faithful in 10 counties, including all of Southwest Florida, has warned her not to cross that patriarchal line.
“It has been brought to my attention that you purportedly reside in the Diocese of Venice in Florida and may attempt to be ‘ordained’ to the ministerial priesthood here within this Diocese,” Dewane wrote in a letter to Beaumont. “This is a most grave and serious matter of consequence for your soul.”


The consequence is automatic excommunication, or expulsion from the church, the bishop wrote. The same penalty applies to anyone who participates in the ordination ceremony.
Beaumont says she will follow her conscience and take the consequences. The ordination will be held at 3 p.m. at Lamb of God Church, a Lutheran-Episcopal congregation on Cypress View Drive in Fort Myers.
“Of course, we all reject that excommunication, because it’s a man-made rule that does not really follow what we know of Jesus, what Jesus would do,” said Beaumont, who entered the convent at 17 and was a Benedictine nun for 35 years. “How can any group of human beings say to God, ‘You can’t call a woman.’?”
She is one of more than 124 women priests and 10 woman bishops who say they have been called to serve in the Catholic Church. Most are in the United States, but others are found in South America, Germany, Austria, France, Ireland, Canada and other countries. The movement began in 2002 with the ordination of seven women by a male priest on the Danube River....
But the idea women can’t be priests also is a man-made rule, said Bridget Mary Meehan, a woman Catholic bishop who is based in Sarasota and will preside over Beaumont’s ordination.Women priests, their supporters and some scholars claim scripture and other documentation shows women as well as men were called by Jesus and shared equally as his followers. They particularly note a 2007 book by Jesuit scholar Gary Macy called “The Hidden History of Women’s Ordination.”The bishop’s letter reflects “the misogynist tradition in the Roman Catholic Church” about women’s rights, Meehan said.“Women priests are the Rosa Parks of the Catholic Church,” she said. “We are no longer going to sit in the back of the Catholic bus in subordination to the hierarchy. We are not leaving the church. We are leading the church into a new era of justice and equality for women.”
Beaumont said the gospels that name the 12 men came out of a time when men dominated the culture.
“There were women in the first 1,200 years of the church who were serving in the ministerial roles of deacon, priest and bishop,” she said. “There is documented history for that even though the bishops reject that scholarship.”


Posted by Bridget Mary Meehan at 6:01 PM No comments: