James Carroll, Practicing Catholic. review by Bishop Tom Gumbleton, published by the NCR on Apr. 24, 2009.
"Reform is coming not from the collapsing clerical establishment but from the people. We maintain our loyalty to the church because we cannot live without it. The church gives a language to speak of God, a meaning that is God. The church feeds us in the Eucharist, keeps the story of Jesus alive in the preaching of the Word, marks our journey through life with the sacraments, and underwrites our participation in the community that transcends space and time."
As "practicing Catholics" all of us can rejoice in the great vision of Pope John XXIII with which Carroll concludes his story:
"Today ... Providence is guiding us toward a new order of human relations, which thanks to efforts far surpassing human hopes, will bring us to the realization of higher and undreamed of experiences."
Thomas Gumbleton is a retired auxiliary bishop of the Detroit archdiocese.
Excellent review, Bishop Gumbleton!
Roman Catholic Womenpriests are gifting the church with a renewed, vibrant, empowered "people of God"model rooted in Vatican 11. We are living this vision in grassroots communities. The reform is now a reality. Come and see! Bridget Mary Meehan, RCWP
Posted by Bridget Mary Meehan at 9:08 PM No comments:

Roman Catholic Womenpriests: "Woman says she was called to become a Catholic priest" in News Herald 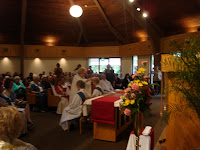 Ordination of Dena O'Callaghan
as a Catholic priest
Woman says she was called to become a Catholic priest
Sunday, February 28, 2010
By Donna Abramczyk
"For the past 35 years, Dena O’Callaghan has dreamed of something many consider an unreachable goal — to become a Roman Catholic priest.With her husband, John O’Callaghan, a former priest, and her sister and brother-in-law, Chris and John Zelasko of Brownstown Township, looking on, the 73-year-old former Wyandotte woman and nun was ordained a priest on Feb. 6 in Sarasota, Fla.Even with the threat of excommunication from the Diocese of Venice, in which the ceremony took place, a crowd of nearly 300 filled the church, St. Andrew United Church of Christ, O’Callaghan said...“We’re not leaving the church — it has left us.”O’Callaghan said Meehan once likened womenpriests to the civil rights movement.“We’re the ‘Rosa Parks of the movement,’ Bridget Mary told us,” she said. “It might take longer than civil rights did, but that’s our hope and prayer for the future.”
For more information about Roman Catholic Womenpriests, visit wwww.romancatholicwomenpriests.org.
URL: http://www.thenewsherald.com/articles/2010/02/28/life/doc4b86842dacd77829880545.prt
Posted by Bridget Mary Meehan at 1:40 PM No comments: 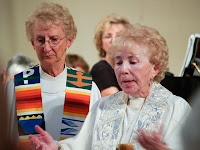 (Left)Newly Ordained Dena O'Callaghan, from
Ocala, Fl.standing next to Bishop Bridget Mary Meehan
at historic Florida ordinations
of Roman Catholic Womenpriests
http://www.miamiherald.com/2010/03/04/1507570/women-seeking-ordination-face.html
Thu, Mar. 04, 2010
Women seeking ordination face discrimination
BY BEA HINESbhines@MiamiHerald.com
"Last month in Sarasota, a group called Roman Catholic Womenpriests ordained two women and a deacon. It was the first such ordination in Florida by the group, whose members consider themselves Catholic but who are considered outcasts by the Church hierarchy.
While neither of the women was from Miami or anywhere else in South Florida, (the closest resident to this area is Dena O'Callaghan of Ocala) I believe these spiritual women have taken an important step in stamping out discrimination against women in all areas of life..."
...."Bourgeois likened the Catholic church's stand against the womenpriests movement to the many years the Catholic church opposed the abolition of slavery.
``This grave injustice being done against women and the Church will not go away,'' Bourgeois said. ``They cannot stop it. It is a movement whose time has come.
``Over 5,000 priests and bishops sexually abused more than 12,000 children in the Catholic church. Many bishops were aware of the crimes and remained silent. The bishops and priests who committed the crimes were not excommunicated. "
``However, women who want to be priests, and anyone who supports them are excommunicated. This is a scandal,'' he said. "

Response to Nicholas Kristof on Religion and Women
By Mary E. Hunt January 18, 2010

A fine start. And now we look forward to a deeper, and broader conversation.

"Everyone likes to see their favorite issue on the Op-Ed page of the New York Times. So Nicholas D. Kristof’s January 10, 2010 piece “Religion and Women” brought delight to the eyes of many feminists in religion and opened the eyes of others for whom the issues were new. .."
"...either there was a typo in the article or else Mr. Kristof might want to rethink something. Describing the context of women’s second class citizenship he writes:
That’s a context that religions have helped shape, and not pushed hard to change.
The “not” is misplaced. It is more accurate to say:
That’s a context that religions have helped shape, and pushed hard NOT to change.
Otherwise, one misses the fact that many religions, Catholicism for example (my own tradition, though as a woman I have no decision-making power), have been tireless in their efforts to keep women subordinate. ..

http://www.religiondispatches.org/blog/sexandgender/2199/response_to_nicholas_kristof_on_religion_and_women
Posted by Bridget Mary Meehan at 2:42 PM No comments:

March 2, 2010
Catholic diocese seeks cash to pay Irish victims
"The diocese's chief financial officer, Eugene Doyle, said the church had no option but to ask its faithful to help foot the bill. He estimated that the diocese's 100,000 members in 80 parishes would be asked to contribute euro60,000 ($85,000) annually for the next 20 years, or euro1.2 million total — but stressed that no money would be taken from normal weekly collections."

"Since 2002, a government-organized compensation board has paid out more than euro800 million to 13,000 people who were abused in church-run residential institutions for children and another euro150 million to the victims' lawyers."
Posted by Bridget Mary Meehan at 12:43 PM No comments: 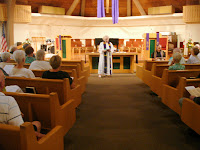 Check out MSN today and take the quiz on Women's History Month. Go to section Religion and Faith. There you will find one of the questions is:


Posted by Bridget Mary Meehan at 6:56 PM No comments: 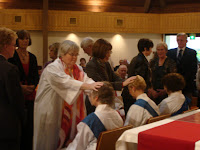 Time to allow women and married priests
Reading the recent article, "Women priest movement controversial," on the ordination of woman priests in the Roman Catholic Church, it becomes obvious the assisted suicide on the Eucharist by the Vatican and cooperating bishops continues.You would think they would welcome the assistance of these women.

The Irish-born priests who have served Florida so well are getting older, and there will not be any replacements from the Emerald Isle because of the cover-up of the sexual abuse of youth, leading to empty seminaries. U.S. bishops are importing priests from Third World countries, when these priests are needed in their own countries.

The majority of Catholic priests and laity would welcome the assistance of married priests and women priests, but if the priests dared voice that opinion, they would be sent home without a pension. So American Catholics sit idle watching their bishops close churches.Hopefully the Anglicans, Episcopalians, Lutherans and the other Christian churches will keep up the tradition of the Eucharist that Christ commanded at the Last Supper on the night before He died -- "Do this in memory of Me."

The Vatican and most of the American bishops are only interested in personal palaces, the Vatican Bank and masculine theology.

Vatican's conspiracy of silence
The Guardian
by Robert Mancini
Guradian.co.uk

"Vaticano Spa (Vatican Ltd) a book about the murky financial dealings of the Catholic church
(The subtitle reads: "from a secret archive – the truth about the church's financial and political scandals") has been a runaway success in Italy.
The lack of reporting on the allegations made by Gianluigi Nuzzi in Vatican Ltd shows the political power the church retains. "


Posted by Bridget Mary Meehan at 9:46 PM No comments: