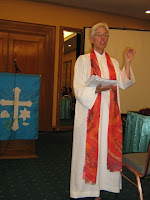 Victoria Rue: A woman's place in world religions
Jakarta
Mon, 08/04/2008 11:14 AM
" ... Victoria Rue hopes her trip to Indonesia will plant a seed that eventually sees the> ordination of this country's first female priest... ""Women have been thought of as evil, sinful and lustful, as representing only the body and not the spirit."" Rue, who is also a lecturing professor of comparative religion and women's studies at California's San Jose University, said women have been systematically excluded from positions of power in the Church."
http://www.thejakartapost.com/news/2008/08/04/victoria-rue-a-woman039s-place-world-religions.html
Posted by Bridget Mary Meehan at 3:29 PM