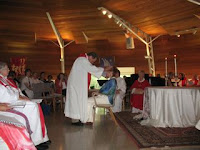 A Roman Catholic priest faces excommunication for his public support of women’s ordination through the Roman Catholic Womenpriests movement. But he is not just any priest. Fr. Roy Bourgeois, founder of the School of the Americas (SOA) Watch, is internationally known for his work to end U.S. government-funded combat training of Latin American militaries. This month he has decided to risk his 36 years of priesthood to end sexism in the Church.

In late October, the Vatican sent a letter to Fr. Roy Bourgeois’ superiors, saying he had 30 days to recant his position on women’s ordination or be excommunicated. The 30 days, counted from the day posted on the letter, ends today. Tomorrow, the biggest annual weekend event for the SOA Watch organization begins as they launch their vigil in Fort Benning, Georgia, to close the institution formerly called the School of the Americas (in 2001, renamed the Western Hemisphere Institute for Security Cooperation). Up to 20,000 Catholics and other supporters are expected to converge for the vigil.

An online petition, initiated by the Women’s Ordination Conference, and supported by Fr. Bourgeois and coalition partners Call To Action/USA and Roman Catholic Womenpriests garnered over 3,700 signatures of Catholics across the country. Thousands more are expected to sign it this weekend at the SOA Watch vigil. The petition, “Break the Silence on Women’s Ordination. Shatter the Stained Glass Ceiling,” can be found at www.womensordination.org.

Fr. Bourgeois wrote in his response to the Vatican that he would not recant his support for women’s ordination. He said, “Conscience is very sacred….it is my conscience that compels me to do the right thing. I cannot recant my belief and public statements that support the ordination of women in our Church.”
The Vatican issued its threat of excommunication due to Fr. Bourgeois’ participation in the ordination of Janice Sevre-Duszynska in Lexington, KY on August 9, 2008. Fr. Bourgeois gave the homily during which he said “Sexism is a sin” and went on to say, “The hierarchy will say, ‘It is the tradition of the church not to ordain women.’ I grew up in a small town in Louisiana and often heard, ‘It is the tradition of the South to have segregated schools.’ It was also ‘the tradition’ in our Catholic church to have the Black members seated in the last five pews of the church. No matter how hard we may try to justify discrimination, in the end, it is always wrong and immoral.”
Thirty-five Catholic women have been ordained as priests in the United States in the last three years through the Roman Catholic Womenpriests movement.
To read Fr. Bourgeois’ letter to the Vatican and his letter to fellow priests, visit http://www.womensordination.org/.

November 22: Aisha Taylor, Executive Director of WOC to speak on main stage, 11:45AM

Founded in 1975, the Women’s Ordination Conference is the oldest and largest national organization that works to ordain women as priests, deacons and bishops into an inclusive and accountable Roman Catholic church. WOC represents the 63-70 percent of U.S. Catholics that support women’s ordination. WOC also promotes perspectives on ordination that call for more accountability and less separation between the clergy and laity. For more information, visit www.womensordination.org.

Call To Action (CTA) is a Catholic movement working for equality and justice in the Church and society. An independent national organization of over 25,000 people and 53 local chapters, CTA believes that the Spirit of God is at work in the whole church, not just in its appointed leaders. For more information, visit www.cta-usa.org

The mission of Roman Catholic Womenpriests North America is to spiritually prepare, ordain, and support women and men from all states of life, who are theologically qualified, who are committed to an inclusive model of Church, and who are called by the Holy Spirit and their communities to minister. For more information, visit www.romancatholicwomenpriests.org.
Posted by Bridget Mary Meehan at 6:30 PM

Fr Roy doesn't seem to have much support. We wish him well in his new apostolate of lay protestor.