Letter from Fr. Roy Bourgeois to his Maryknoll Community in Support of Women Priests 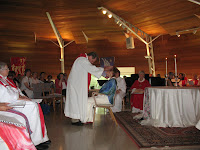 On August 9, 2008, Maryknoll priest of 38 years, Roy Bourgeois, participated in my ordination as a Roman Catholic Womanpriest. Soon after, he was told by the Vatican to recant his support of women priests, which he refused to do. Instead, Roy, as founder of the School of the Americas Watch, continues to speak out for justice for the poor and marginalized in Latin America -- as well as for women priests. In November 2009, Roy and the School of the Americas Watch were nominated for the Nobel Peace Prize. He asks that we share the following message far and wide. Janice Sevre-Duszynska

On May 24th, 2010 Roy Bourgeois sent this letter to members of his Maryknoll community.

To My Maryknoll Brothers, You have been my community, my family, for 44 years. Because of my love and respect for you and for Maryknoll, I want to explain, as best I can, why I believe women should be ordained in our Church. As a young man in the military, I felt God was calling me to be a priest. After much discernment, I entered Maryknoll and was ordained in 1972. I am grateful to have found the hope, meaning, and joy I was seeking in life.

In my ministry over the years, I have met many devout women in our Church who feel called by God to the priesthood, just as we do as men. And why shouldn't they be called? As Catholics, we profess that our all-loving God created men and women of equal worth and dignity. As priests, we all say that the call to the priesthood is a gift and comes from God. My brothers, who are we to reject God's call of women to the priesthood? Who are we, as men, to say that our call from God is valid, but their call, as women, is not? I believe that our all-powerful God, Creator of the universe, is certainly capable of calling women to be priests.

Our Church leaders tells us that women cannot be priests because Jesus chose only male apostles. With all due respect, this is not accurate. As Christians, we know the importance of the resurrection. It is at the core of our faith. Jesus chose a woman, Mary Magdalene, to be the first witness to His resurrection. She was also chosen to bring "the good news" to the male apostles and became known as "the apostle to the apostles." Galatians 3:28 is very clear: "There is neither male nor female. In Christ Jesus you are one." Furthermore, a 1976 report by the Pontifical Biblical Commission, the Vatican's top scripture scholars, concluded that there is no justification in the New Testament for excluding women from the priesthood.

eflecting on the scriptures, the love of God, and the many stories I have heard from women over the years about their being called by God, I believe that excluding women from ordination is rooted in sexism. Sexism, like racism, is a sin. And no matter how hard we may try to justify discrimination, in the end, it is always wrong.

For the past 20 years I have been speaking out against the injustice of the School of the Americas and U.S. foreign policy in Latin America. In conscience, I cannot be silent about an injustice I see much closer to home - an injustice in my Church. The exclusion of women from the priesthood is a grave injustice against women, against our Church, and against our God who is calling women to serve our Church as priests.

Fundamentally, the ordination of women is a matter of justice. At the same time, there are practical benefits to having women priests. As we know, our Church is in a serious crisis. Hundreds of churches are closing because of a shortage of priests. When I entered Maryknoll, we had over 300 seminarians preparing for the priesthood. Today we have eight.

If we are to have a vibrant and healthy Church rooted in the teachings of Jesus, we need the wisdom, compassion, courage, and gifts of women in the priesthood. Like the abolition of slavery, the civil rights movement, and the right of women to vote, the ordination of women is inevitable because it is just.

Let us be on the right side of history. Our Maryknoll community is well known and respected for its work for justice and the oppressed. My brothers, I respectfully ask that you break your silence and stand in solidarity with the many women in our Church who, like you and me, are called by God to the priesthood.

My reply in a letter to Roy. I am a Maryknoll priest ordained in 1955, in good standing with my superiors and with Vatican authorities. I served 40 years in Japan.

RoyBourgeois,M.M
Wrong, Roy. Fundamentally wrong on the ordination of women.

It's like enlisting in the Navy. You passed the tests but a lot of guys didn't. A lot of guys (and gals) were rejected. For various reasons. They may well have felt the call to serve out of patriotic motivation. But that doesn't mean a damn if the Navy finds you unfit. You and I, as individuals, might have been found unfit by Navy standards, even as males. The Church has found women, as a gender, unfit. Or unfitting. For much longer than Navy regs have been observed, I note.. You are wrong, Roy.

But nowhere in Scripture does it state in words that women may not be ordained, you argue. Sure. You are right in this, Roy. But the Church, differing with Protestant positions, has always insisted on Tradition in addition to Scripture. The Church alone, Roy, has preached and preserved the teaching of Jesus as handed down from his chosen Apostles. You are wrong, Roy

Their feminist activism is meaningless. And yours. From Jesus' days on earth to our time, women are unwelcome as priests. Clearly, that is, in emulation of Jesus NOT selecting women to whom he gave elevated roles in the salvation plan of Almighty God: mother of Jesus, observers and participants to principal events in his public life, first persons at his tomb and witnesses to his closest followers. But he did not ordain them or name them as Apostles. You are wrong, Roy.

You blame Jesus of sexism? Of injustice? You are wrong, Roy. His mother's prominent status and role in the Church today should convince you of that, not to mention that I, a male, cannot bear children.. You have spoken out on injustice for years, you maintain. The School of Americas, you mention. I don't know the facts in that issue but they are irrelevant in the issue of women's ordination. It's not a matter of justice, as you claim. It's a matter of God's will. You are wrong, Roy.

Practical benefits to having women priests? Perhaps. But do they outweigh impractical benefits? And does that matter, really? The alleged current priest shortage remains historically an insignificant occurrence for the Church. Consider the times of Martin Luther, for a start. We brought this on ourselves by our refusal to oppose secular trends. Which you, at this time, obviously adopt. You are wrong, Roy.

"Our Maryknoll community is well-known and respected for its work for justice and the oppressed", you write. I would much prefer that it is at least as well-known for its allegiance to the teachings of Jesus Christ and his Church. To that extent, women in our Church may feel themselves called, though NOT called like you and me, by God to the priesthood. You are wrong, Roy.
Your priest in Christ,
JamesP.Colligan,M.M.