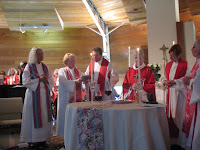 Fr. Roy Bourgeois at Ordination of Janice Sevre-Duszynska http://www.uscatholic.org/news/2011/03/priest-faces-removal-maryknoll-supporting-ordination-women
"He said he planned to seek a canon lawyer for assistance in preparing his response. He also said he hoped to meet with Cardinal Levada in Rome. "I would love nothing more and see it as important to sit down with Cardinal William Levada, the prefect, even if it's for 15 minutes, to look him in the eye and have a discussion on this," he said. "I think it's reasonable. As a priest for 38 years, I feel 15 minutes with someone who has the power to kick you out of Maryknoll, to laicize you, is important. I will ask that of the superior general to help that happen."

"An Imaginary Conversation between Maryknoll Priest Fr. Roy and Cardinal Willian Levada "
( At Roy's insistence, this conversation takes place in public at a fountain in Rome, rather than behind closed doors. This way it can be transparent. Imagine you are there too. What you like to say? Imagine that women priests are there too...)

Cardinal Levada: Now, Roy, you know that our church does not allow women priests, in fact, we thought we made that clear with the delecto graviora last summer, when we put these women in the most grievous crime category along with the pedophiles!

Fr. Roy: But Bill, we men have been ruling the church for over 2000 years and look at the mess we are in now. When I was last here, I was on Vatican radio, and after a conversation about SOA Watch, I began to express my thoughts about the need for women priests. Suddenly, there was static and the Vatican radio went silent for 15 minutes!

So now I am here, ten years later with the same message. Our church needs women priests and now by the grace of the Holy Spirit we have them!

Cardinal Levada: Do you know what we did to heretics like you in the Middle Ages who refused to recant their errors?

Fr. Roy; Yes, of course, you burned Joan of Arc at the stake for following her conscience and today, your condemn, and punish the prophets of our age who follow their consciences. Today, millions of Catholics are dissenting from the false teachings of the church that contradict Jesus' example. Have you forgotten that he liberated and empowered the people and chose women as disciples including Mary of the Magdala, the apostle to the apostles? During the early church, scholars remind us that women served as deacons, priests and bishops. So the women priests are doing nothing new. They are reclaiming our ancient tradition of women in ordained ministry. The full equality of women in church and society is the voice of God in our times. No punishment will stop this movement of the Spirit who blows where She will! Some of the women priests have accompanied me, there are right here in the circle. (Women priests extend arms in blessing)

Cardinal Levada: Today must be my lucky day! (as he throws a coin in the fountain!)
Posted by Bridget Mary Meehan at 11:45 PM