ARCWP Ordination:Homily by Bishop Bridget Mary Meehan, May 24, 2014, Cleveland “Women Priests Sharing the Living Water of God’s Love of All” 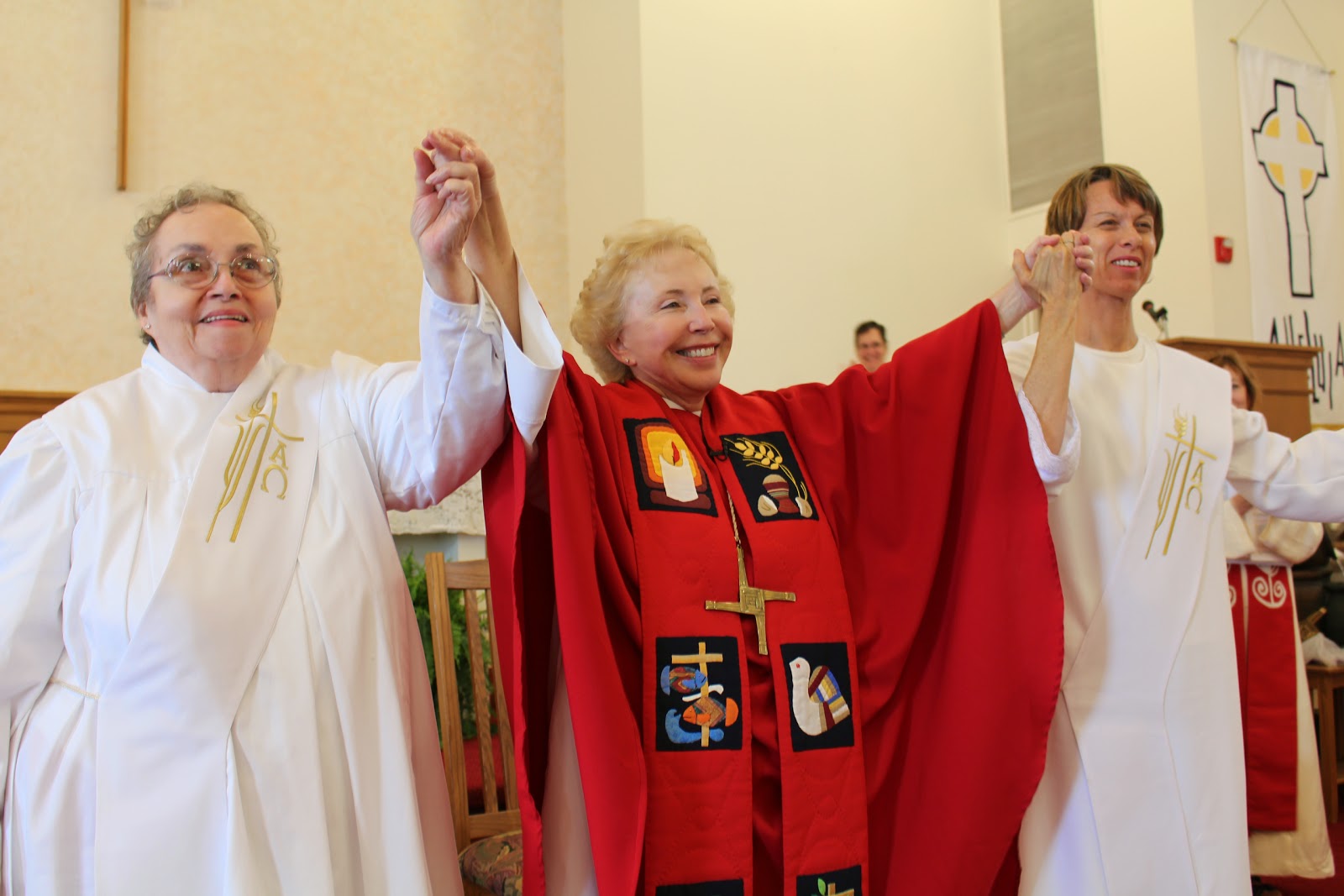 Today we rejoice that the Association of Roman Catholic Women Priests will ordain 6 women:
Deacon Barbara Billey who lives in Windsor, Ontario, Canada, has been married for 32 years. She is currently a counselor and art therapist. Barbara, a Doctor of Ministry candidate, has a particular interest in women's spirituality and a passion for integrating sacred arts in liturgy.
Deacon Susan Marie Guzik from Eastlake, a suburb of Cleveland, is a widow, mother, grandmother. She received certification as a Lay Ecclesial Minister in the Diocese of Cleveland. Susan has volunteered in the Diocese as a pastoral minister and for the past seven years served as the Director/Advisor of the Stephen Ministry Program at St. Mary Magdalene Parish.
The following women will be ordained PRIESTS: 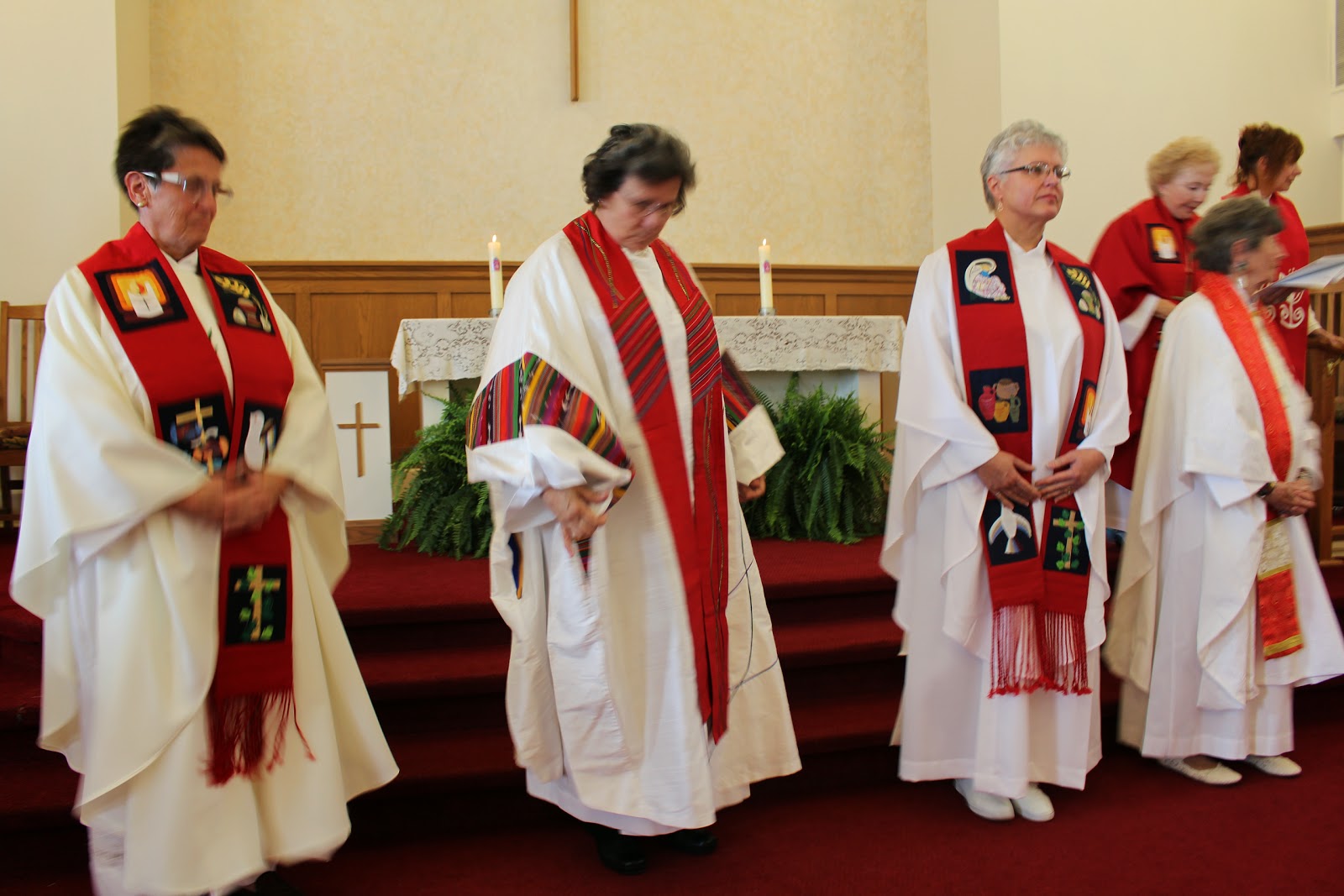 Mary Bergan Blanchard from Albuquerque, NM, is a former Sister of Mercy, a widow, mother, grandmother, teacher, writer and licensed counselor. After retiring in New Mexico, she served as a Mental Health Counselor in a Roman Catholic Church for twenty years.
Mary Eileen Collingwood, from the Cleveland area, is a wife, mother and grandmother who, with her advanced degree in theology, has served for 40 years in church ministry and taught theology on the high school and college levels.  In the parish she was Director of Religious Education, Coordinator for Marriage Preparation and Pastoral Minister.
Irene Scaramazza, from Columbus, Ohio has  advanced degrees in theology, pastoral counseling, and family therapy.  She is currently working as a hospice chaplain having completed her Provisional Board Chaplaincy Certification.
Marianne Therese Smyth, from Silver Spring, MD; is a mother of two sons. She is a hospice volunteer with Montgomery Hospice and has worked for 25 years as a para-educator with special needs 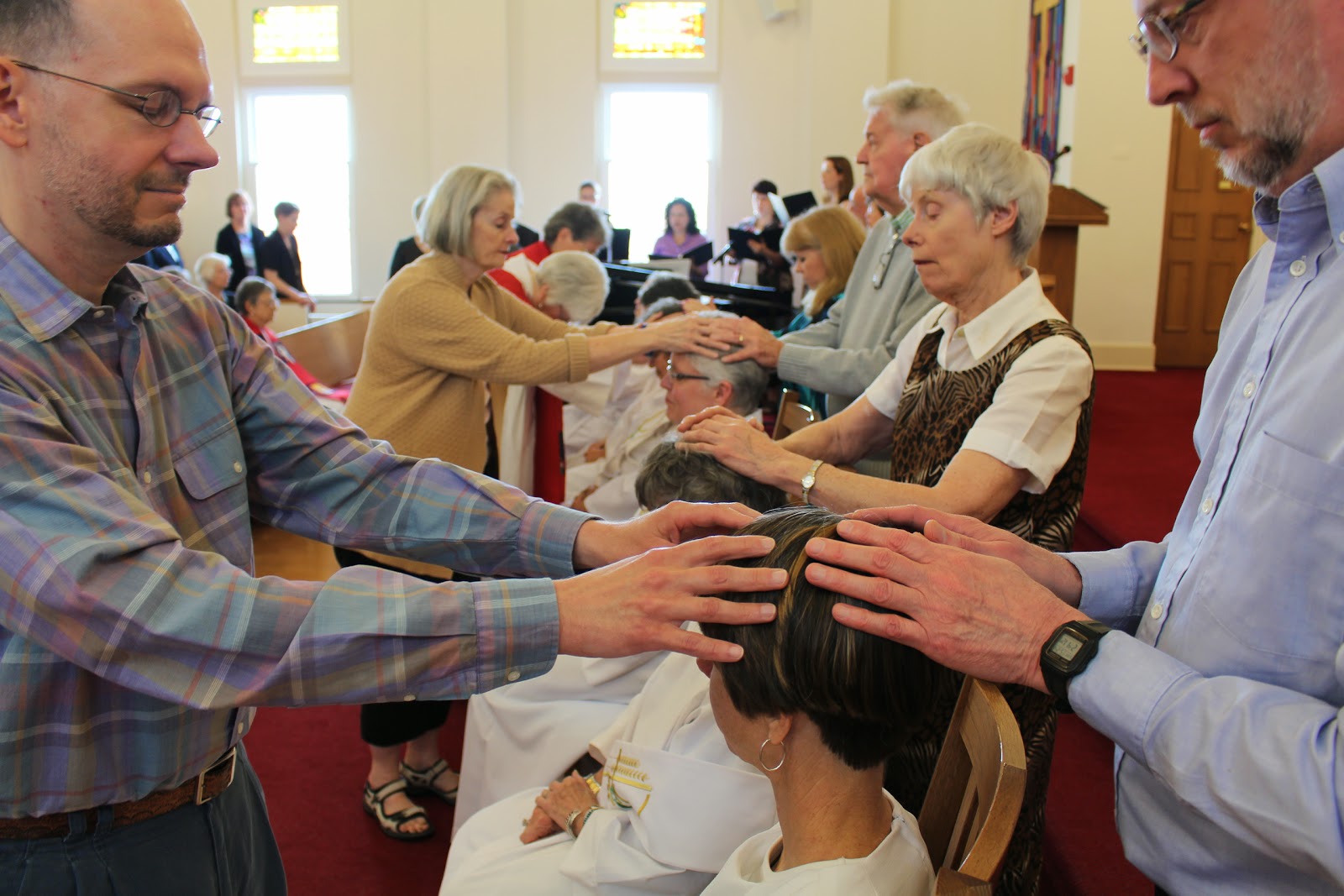 students. She has a Masters of Education in counseling, a certificate in theological studies and serves the Living Water Inclusive Community in Catonsville, Maryland.
These women, like the Samaritan woman have left their water jars behind. They come today to share the living water of their lives with God’s people.

The story of the Samaritan woman at the well records the longest conversation between Jesus and anyone in the gospels. This sacred text reveals that Christ is the “wellspring of love” that will fill us forever. Eve­ryone is invited to drink the “living water” and belong to the community of faith. Jesus’ trademark is inclusiveness.  There are no outsiders. All that is required is that we worship in spirit and truth.
In the encounter with the woman at the well, Jesus goes beyond the social and religious taboos of his times.  It is astonishing for us and shocking even for the apostles that Jesus confided his identity as Messiah to a woman who does not belong to the religious establishment and who is a foreigner and divorced. 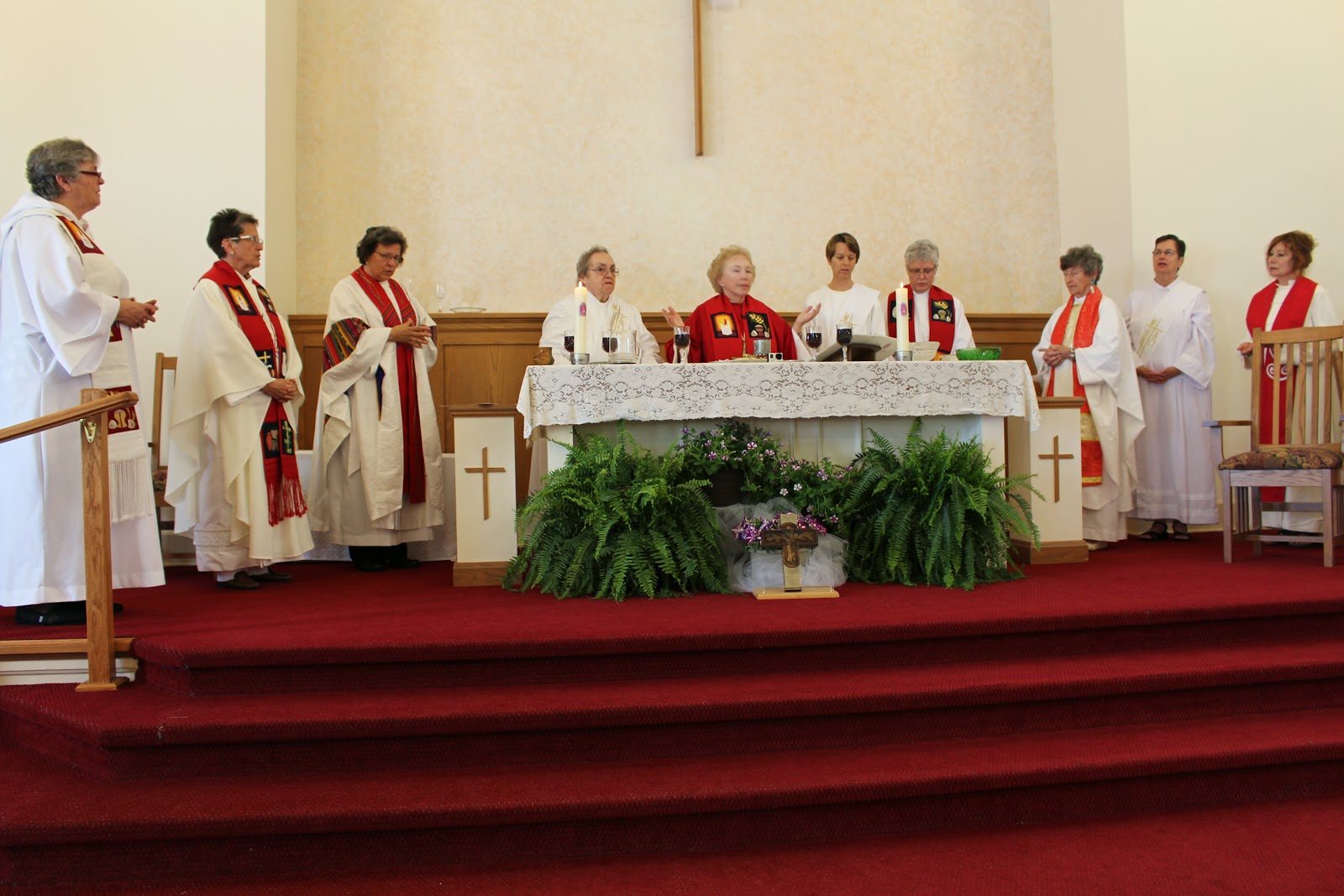 According to biblical experts, the woman understood Jesus’ mention that she had no “husband” not as a call to true repentance, but as a call to true worship. Other commentators believe that Jesus’ referral to the woman’s “husbands” pointed to the Samaritan practice of intermarriage outside the tribe, a custom that caused tension with the Jews because it destroyed Jewish ancestral lines. No matter what interpretation we accept, the Samaritan woman continues to live in couples today who reflect the face of God as they live as spiritual equals in committed, covenantal relationships.

So too, today, Roman Catholic Women Priests are listening and responding to God's Living Water flowing through us as we evangelize our church with the good news that all are invited to live Gospel equality now in inclusive communities where everyone is welcome.
Like the Samaritan woman, we too are daring and bold women, who are leaving our water jars behind, because we are being and encountering the Living Water of God’s love every day on the margins of our church.  Beyond our comfort zone and off the power grid we minister to the family of God who do not have a spiritual home - divorced and remarried Catholics, gays, lesbians, transgender, women who are excluded from liturgical leadership, youth and many others who are seeking a contemporary model of Church that is aligned with Gospel values. 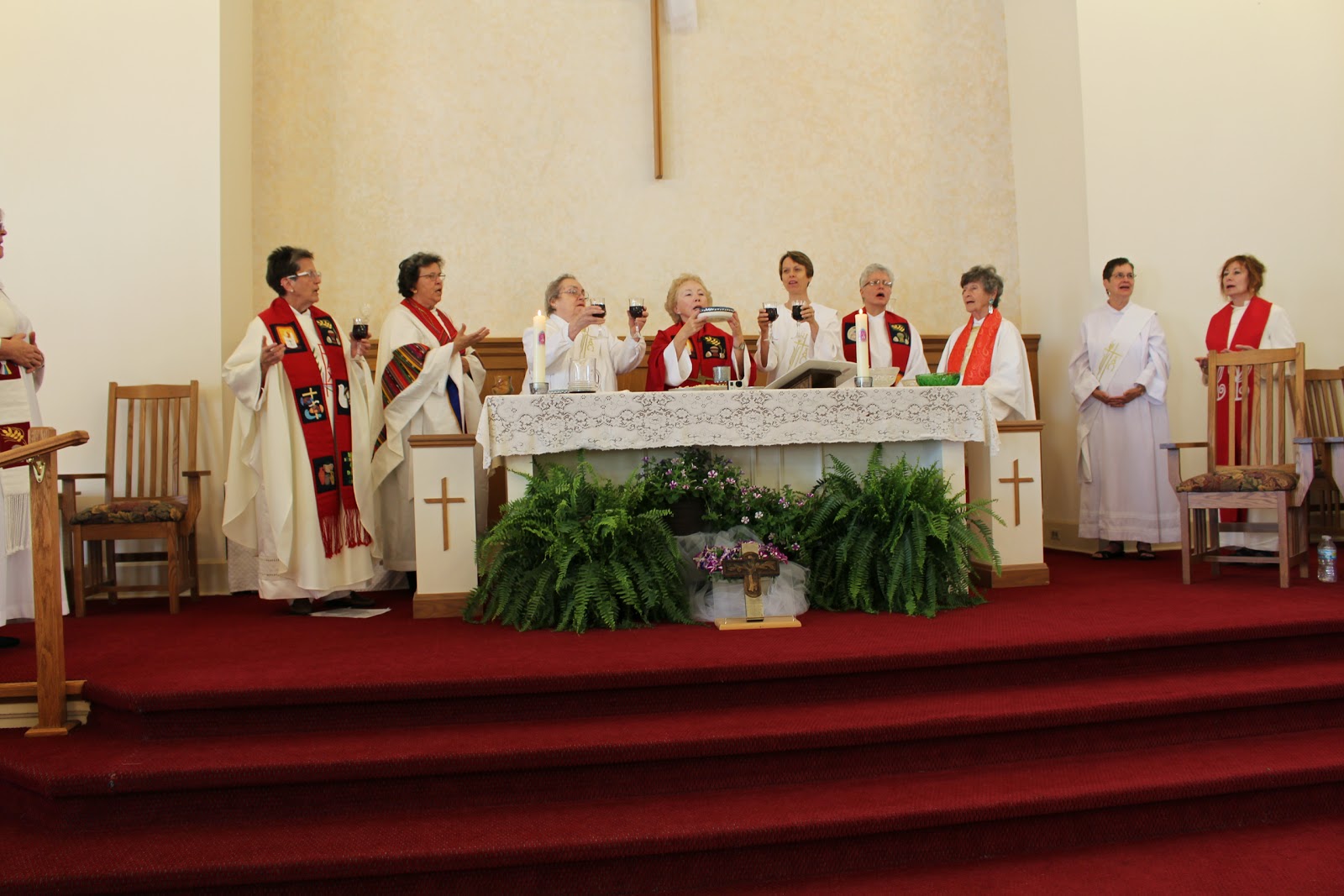 In his recent book, A Call to Action:  Women, Religion, Violence and Power, President Jimmy Carter, who supports women’s ordination and women’s equality in all religions, finds it “ironic” that women are welcomed into many professions “but are deprived of the right to serve Jesus Christ in positions of leadership” as they did in the early Christian churches. The former president said that the violence and abuse of women in society is directly connected to the spiritual inequality of women in religious practice. He said that he would become a Catholic when he is invited to do so by a female priest!  I assure you that we have issued an invitation!
World-renown Spanish human rights activist, Sister Teresa Forcades, affirms the vision of Vatican 11 and suggests that Pope Francis might be an agent for change. In an article entitled: "Activist Nun -Change Comes from the Bottom" written by Janice Sevre-Duszynska and published by the National Catholic Reporter:
“Sister Teresa said that it must be the people in the church who will promote the acceptance of contraception and an end to the church's homophobia and who become voices in the struggle for justice for women.” ‘We now have women priests with the people from the bottom up,’ Forcades said with a smile. ‘The people are ready.’ ” 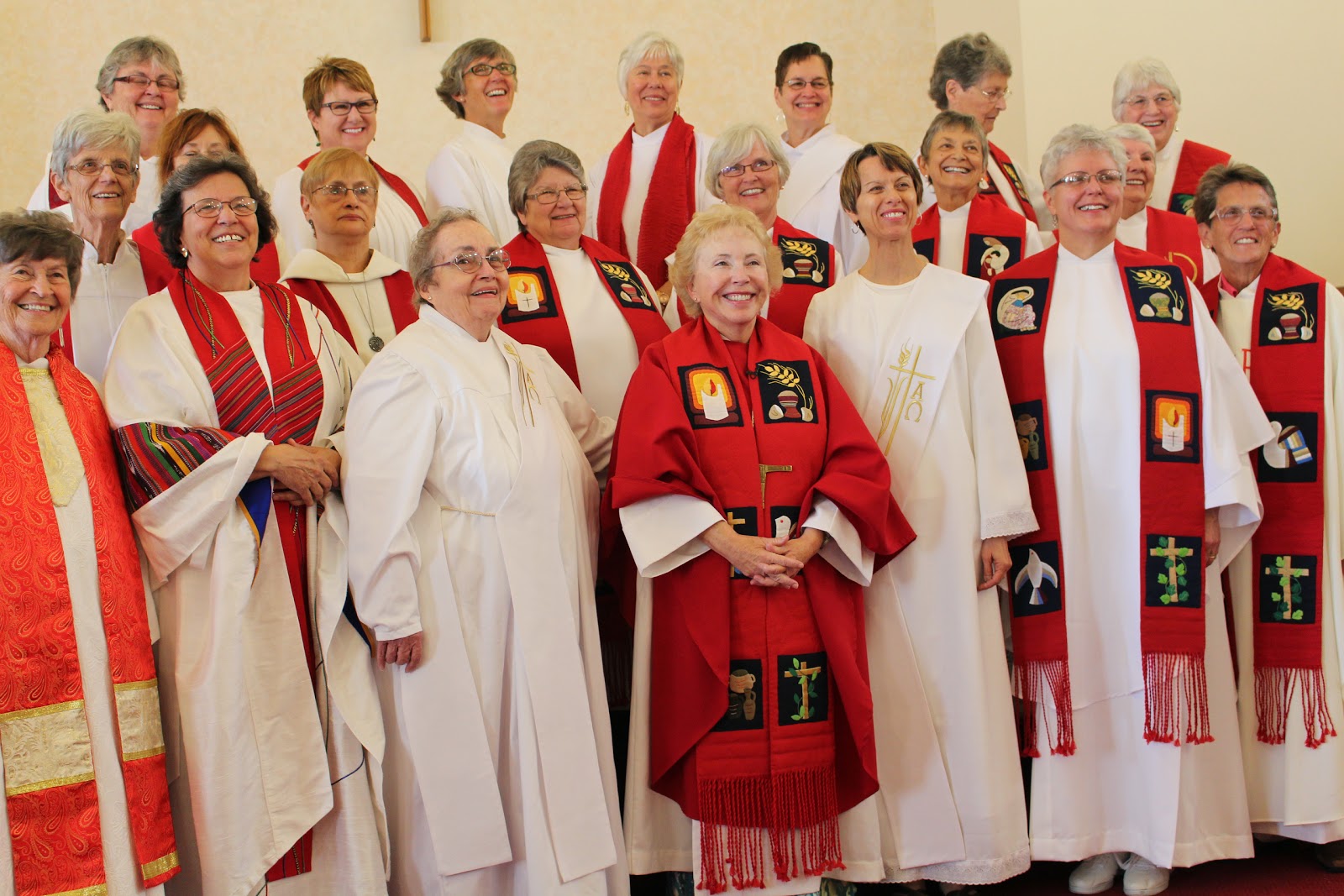 Twenty years ago, on May 22, 1994, Pope John Paul II issued an apostolic letter, “Ordinatio Sacerdotalis” (“Priestly Ordination”) which reserved priesthood in the Catholic Church to men only."This teaching that 'women are not fully in the likeness of Jesus' -- qualifying, as it does, as a theological explanation -- is utterly and demonstrably heretical,” said Augustinian theologian John Shea in  his 2nd letter to U.S. bishops.
Despite two decades of blatant discrimination of women and  denial of women’s basic human rights as spiritual equals before God, justice is rising up for women in the church in grassroots, inclusive, Catholic communities. With almost 200 Roman Catholic Women Priests in the international movement, a renewed priestly ministry is flowering in 10 countries. Catholics worldwide are embracing a new model of church led by women and men.
In imagining a dialogue with our beloved Pope Francis, I would invite him to consider faithful dissent in our church as healthy. I would ardently appeal for the end of discrimination, spiritual violence and bullying toward any member of the Body of Christ, including the Leadership Conference of Women Religious and for the cancellation of ecclesiastical punishments, including excommunication against women priests and our supporters. Let us pray that the Spirit will move our Pope to affirm all of us as beloved sisters and brothers in the family of God.

I believe that on a deep, mystical level women priests are beginning a healing process of centuries-old deep misogyny in which spiritual power was invested exclusively in men. With your prayers and commitment, we are recovering the dropped thread of our sister women in the early Church who embraced with dignity their full right to preach, to proclaim and to lead worship.
Now we ordain you, our beloved Sisters, Mary, Marianne, Mary, Irene, Barbara and Susan.   In solidarity with Jesus and the Samaritan woman may you be God's living waters bringing refreshment to the arid structures of our Church and beyond. May you help to liberate God's people from oppression by  acts of justice, compassion and love.  May you  foster spiritual renewal in inclusive faith communities of equals.
Today, all of us rejoice that Christ Sophia, Wellspring of Wisdom, is in our midst! 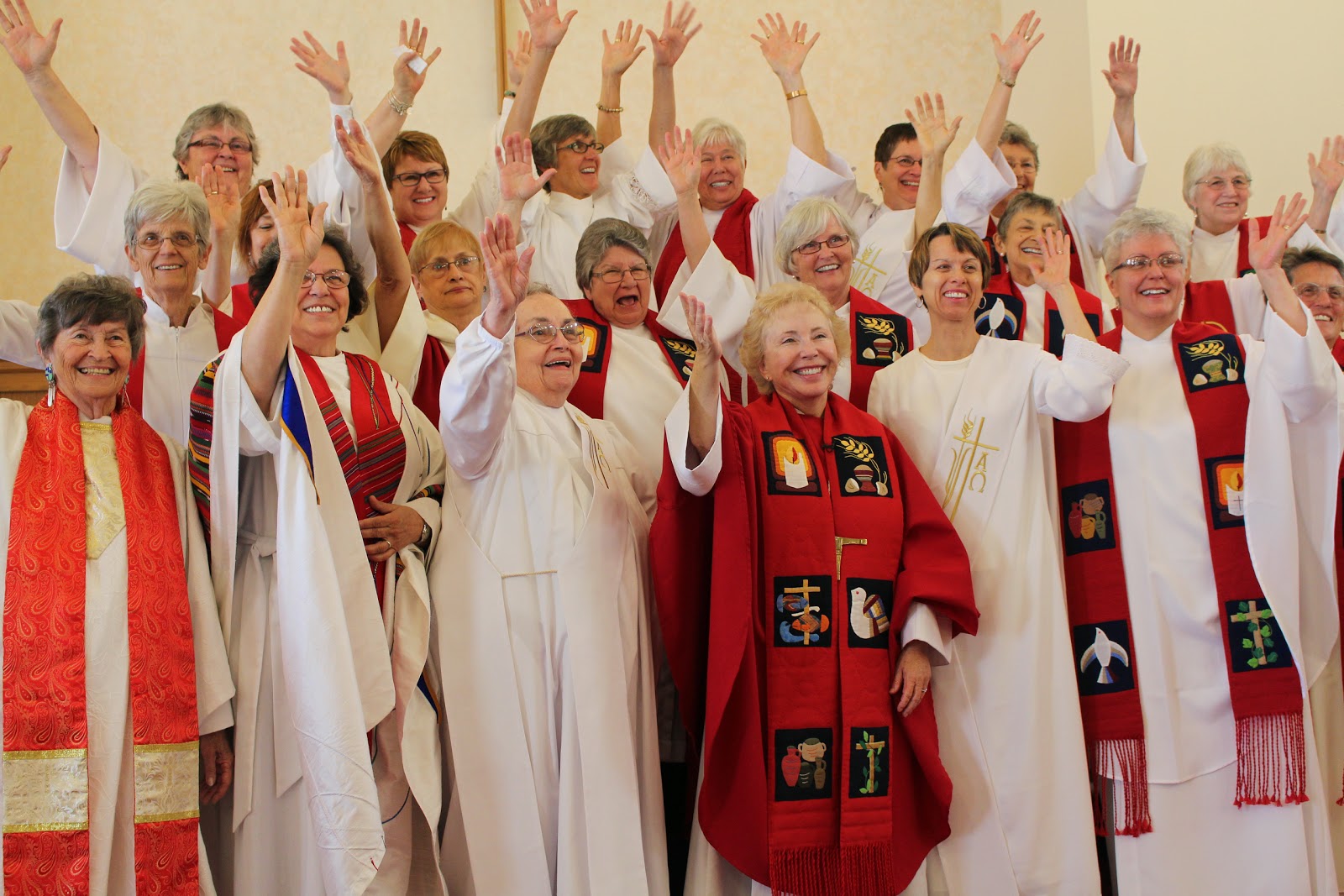 Bridget Mary Meehan, D.Min., a Sister for Christian Community, was ordained a Roman Catholic priest in Pittsburgh, Pennsylvania on July 31, 2006. She was ordained a bishop on April 19, 2009.  Dr. Meehan is currently Dean of the Doctor of Ministry Program for Global Ministries University, and is the author of 20 books, including   Living Gospel Equality Now: Loving in the Heart of God, The Healing Power of Prayer and Praying with Women of the Bible . She presides at liturgies in Mary, Mother of Jesus Inclusive Catholic Community in Sarasota, Florida. Dr. Meehan can be reached at  sofiabmm@aol.com and  www.arcwp.org
Posted by Bridget Mary Meehan at 12:01 PM