"Letetia Rawles served as a local nun for decades, offering prayers and help for countless others.
She was kicked out of the Catholic Church after breaking cardinal rules and acting as a priest. 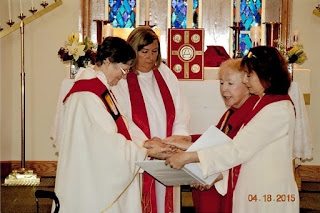 "Yahweh you are my shepherd I want nothing more. You let me lie down in green pastures… in green meadows you lead me beside restful waters,” read Rawles.

Psalm 23 is a favorite scripture for Rawles, who likes to simply go as Tish. Before last week, she was a part of the Catholic Church.

Rawles had been a nun for 47 years and wanted to be a priest. She did so with the help of the Association of Roman Catholic Woman Priest and became ordained in April. The problem is that she is a woman, and that is against the rules.

Rawles says during her priesthood she stayed under the radar.

"As a catacomb priest means that you don't do anything in public you do things privately,” said Rawles.

Privately or publicly, the Catholic Church doesn't recognize her new position. Rawles knew that she could be excommunicated but didn't know it would happen so quickly. Rawls is hoping to be reinstated.

“Pope Frances has declared this coming year as the year of Mercy. So we are requesting from Pope Frances, that all excommunication lifted,” Rawles said.

With progressive multiple sclerosis, type 1 diabetes and end stage liver disease, she hopes that prayers she's prayed for others won't be in vain."
http://www.cincinnati.com/story/news/2015/10/27/cincinnati-nun-dismissed-acting-priest/74682372/ 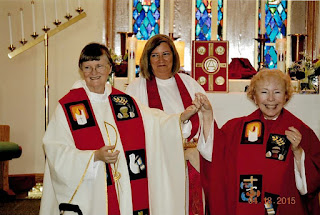 CINCINNATI (Angenette Levy) -- "A retired Catholic nun who has been operating as a priest in secret was kicked out of her religious order and excommunicated after she was questioned about her activities. Sister Tish Rawles has dreamed of being a priest since she was in the fourth grade. "When I first started going to Catholic school I couldn't understand why it was only men on the altar. I couldn't understand why there weren't girls up there too, serving," Rawles said. She responded to her calling by serving as a nun for 47 years but she always wanted more. "I needed to respond to the workings of the Spirit. I needed to follow my conscience what we call Primacy of Conscience," Rawles said. Rawles wrestled with her decision to become ordained. She suffers from MS and end-stage liver disease. She also worried her decision would hurt her community, the Sisters of the Precious Blood. In April, Rawles was ordained a Catholic priest by the Association of Roman Catholic Women Priests. The group said its ordinations are valid because the first women bishops were ordained by a male Roman Catholic bishop with apostolic succession. The group preaches about inclusivity and welcomes members of the LGBTQ community. "All are welcome. All are accepted. No one is turned away from our tables." Rawles preached in secret - also known as catacomb status - until last week. She was questioned by the head of the Sisters of the Precious Blood. She was notified that she was no longer a member of the community and excommunicated. Rawles said she and the other women priests want to force change in the Church. "We feel that we are not leaving the Church. We are leading the Church," Rawles said. She and the other priests are appealing to Pope Francis to remove the excommunication from the women who've been ordained priests during the upcoming Year of Mercy. "Jesus would not excommunicated anybody. Jesus welcomes all with open arms... There's no reason a person can't be a nun and a priest at the same time." Pope Francis has said he'd like to see women have a greater role in the Catholic Church but he has not said that he would be open to women becoming priests. Sister Joyce Lehman of the Sisters of the Precious Blood said Rawles excommunicated herself by her actions. Sister Lehman said she was surprised that Rawles had been acting as a priest. "If we’re going to be Catholic sisters then we will be faithful to the teachings of the Catholic Church," Lehman said."http://www.local12.com/news/features/top-stories/stories/Nun-working-as-priest-fights-excommunication-224703.shtml 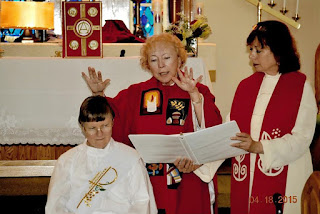 A Cincinnati nun was excommunicated and dismissed from her Roman Catholic religious order last week after admitting she has been secretly acting as a priest since this spring.
Sister Letetia "Tish" Rawles, who has been a nun for 47 years, told the leaders of her order she was ordained in April as part of a movement that has been rebuked repeatedly by the church for violating Catholic teaching. Rawles, 67, has presided over religious services in secret and ministered to people who lived with her in a Cincinnati nursing care facility.
While other women have been ordained priests in violation of Catholic teaching, Rawles is believed to be the first member of a religious order in Greater Cincinnati to acknowledge taking that step and to face dismissal because of her actions.
Supporters appealed to the Vatican on Tuesday to allow Rawles, who is critically ill, to remain with the Dayton, Ohio-based Sisters of the Precious Blood. They said she has served the church as a teacher and care giver for decades and should be allowed to remain a nun, even if the church does not recognize her as a priest.
"Here's a woman who has devoted 47 years of her life in service to the people of God," said Janice Sevre-Duszynska, spokeswoman for the Association of Roman Catholic Women Priests. "And now she's being thrown out of her community."
Rawles said she felt called to the priesthood since childhood and wanted to respond to that call before it was too late. "I thought that before I die, I want to fulfill God's call and my life-long dream to become a priest," Rawles said in a statement Tuesday.
The Catholic Church, however, is unequivocal in its rejection of the ordination of women priests. Pope John Paul II told the faithful 20 years ago that "the church has no authority whatsoever to confer priestly ordination on women." Subsequent popes have said nothing to change that position, which the church has held for centuries.
Under church law, Rawles was excommunicated, or separated from the church, the day she was ordained a priest. Sister Joyce Lehman, president of the Sisters of the Precious Blood, said the religious order had no choice but to dismiss Rawles.
Lehman said she spoke to Rawles last week after learning she may have taken part in the ordination ceremony in April. She said Rawles confirmed she had done so.
"She has gone against what the Catholic Church teaches," Lehman said. "We didn't make a big decision to do this. She was dismissed as a result of her actions."
Catholics have debated the ordination of women for years, and national surveys show a majority of Catholics believe the church should permit it. A Pew poll in June found 59 percent of Catholics support the idea.
Some have argued women priests would alleviate a serious priest shortage in the United States and in other parts of the world, while others say there is scant support for a male-only priesthood in the New Testament and that some historical evidence suggests women did act as priests in the early church.
But the Vatican's position shows no sign of changing. The case against women priests is based on the writings of church fathers, as well as New Testament references cautioning that women "could not teach or have authority over a man."
Yet a small but growing movement has sought to ordain women while continuing to push for change within the church. Sevre-Duszynska said 77 women have been ordained through a two-year program overseen by the Association of Roman Catholic Women Priests, and about 220 have been ordained worldwide. They do so even though ordination means immediate excommunication from the church.
"We also are created in the image of God," she said. "We also feel the call to the priesthood."
Lehman said she and other members of the Sisters of the Precious Blood were shocked to learn a member of the order had spent two years studying to be a priest and then had taken part in an ordination ceremony.
"She kept it secret from us," Lehman said. "There's no way she didn't know the consequences. This isn't something that should have been a surprise to her."
Although Rawles no longer is a member of the Sisters of the Precious Blood, Lehman said the order would make sure she continues to receive medical care and housing.
"We are in the process of setting up some means of financial support," she said. "Not because she was in the order, but because she is a person in need." 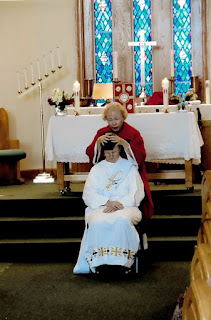 One correction in article below: Our first female bishops in 2002 were ordained by an anonymous male Roman Catholic bishop in apostolic succession. There are now several branches of the international women priests movement. Our branch is the Association of Roman Catholic Women Priests, www.arcwp.org

http://www.thedailybeast.com/articles/2015/10/29/nun-excommunicated-for-becoming-a-priest.html"
Cast Out: Nun Excommunicated for Becoming a Priest"
by Katie Zavadski in The Daily Beast
"After nearly five decades as a Catholic nun, Tish Rawles became a priest—and found herself cast out. Now she’s calling on Pope Francis to do what Jesus would’ve done and bring her back. When Letitia “Tish” Rawles was ordained as a Catholic priest in April, it was the culmination of a lifetime’s worth of yearning—and a practical fix to ministering to the sick and dying at her Cincinnati assisted living facility, where it was often hard to find a priest to administer last rites. “I’ve wanted to be a priest since... probably the fourth grade, as soon as I started attending Catholic school,” she told The Daily Beast. “I always wondered why there were no women at the altar, only men.”But Rawles didn’t know any female priests then, so she became a nun despite feeling the “deeper calling” of the priesthood. “And I’ve loved being a nun,” she said. The 67-year-old had that taken away from her last week, though, when the Ohio-based Sisters of the Precious Blood, the order she’d been with for 47 years, found out about her ordination and told her she was out. She was automatically excommunicated from the Catholic Church, which bars women from the priesthood and shows no signs of budging from that position.Now Rawles and her supporters say they’re appealing to Pope Francis during his Year of Mercy to restore her to the church and to her order. That’s what Jesus would have done they say."This is an opportunity for Pope Francis to take a step towards reconciliation and healing misogyny in the church,” Bishop Bridget Mary Meehan of the Association of Roman Catholic Woman Priests told The Daily Beast. “The full equality of women in the church is the voice of God in our time. The ARCWP is one of many organizations pushing for allowing women to be Catholic priests but an outlier in that it ordains women. Meehan said the ARCWP’s female bishops were even ordained by an anonymous male Catholic bishop, linking them to an unbroken lineage leading back to the apostles. Did she know it was against the rules, did we know it was against the rules? Of course,” Meehan said. “But we are the Rosa Parks of the Catholic Church.”The ARCWP emphasizes the Catholic concept of “primacy of conscience,” which it says allows it to choose to dissent from an unjust teaching."