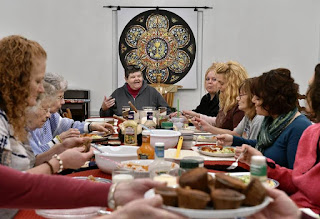 "So, this place is a bit livelier than the convent?
The nuns all laughed at that.
When Journey House opened in September, it was set up so the sisters had their own living room in their wing. They don’t use it. The World Series took care of that. Those games threw the whole bunch all together in one room and by the time the whoops and hollers ended — think the bonding power of Eric Hosmer’s mad dash home in Game 5 — they had learned they were not all that different.
McLarney knew that already from those early morning sessions in the kitchen.
“I know their stories, and if I would have had that life, I’d probably be in the same place,” she said.
Georgia Walker, a former nun and executive director of Journey to New Life, the organization that started the house, has a rap sheet herself. She’s been arrested more than once for trespassing at the Honeywell plant in Kansas City and Whiteman Air Force Base to protest nuclear weapons.
In January, Walker, 68, became a Catholic priest, sort of. Catholic canon law rejects women priests. Walker rejects canon law.
Niemann has a gambling problem.
“Addiction is very lonely,” she said.
A lot of sharing goes on at Journey House.
The women from prison say the place is the closest thing to a home they’ve had in years.
“I don’t really have family — not anymore,” said Sandy Lightell, 48. “The sisters are my family now. I will never be able to repay them for what they’ve done for me. Like everyone here, I’ve done drugs and I’ve done crime, and I know God is working through them to get to us.
“They’ve taught me to give something in my heart and I never want to hurt them...”
Donald Bradley: 816-234-4182
Read more here: http://www.kansascity.com/living/religion/article51695475.html#storylink=cpy
Posted by Bridget Mary Meehan at 4:31 PM