The Inside Story: Our Witness for Women Priests and Justice for Gays by Janice Sevre Duszynska ARCWP

This cold and damp November 14  morning, Roy Bourgeois and I witnessed for gender justice at the Marriott Waterfront Hotel as the U.S. Conference of Catholic Bishops gathered for their bi-annual meeting. Walter Sandell of New Jersey who we met at the Women’s Ordination Worldwide gathering in Philadelphia in 2015 joined us. 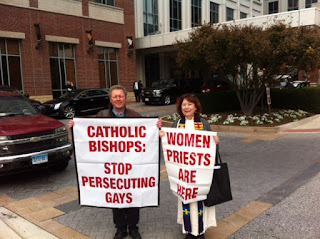 We began our day strategizing a plan of action over a bowl of soup in the restaurant.  Across from us we noticed activist friends, Rita Clark, sister of Jesuit Miguel d’ Escoto, Former Foreign Minister of Nicaragua (1979-1990) and President of the UN General Assembly (September 2008-2009) and friend of Roy’s, and her husband, Tom Siemer, an anti-nuclear peace activist. Years ago when to the bishops met in Wash., D.C. at the Hyatt and the Shrine of the Immaculate Conception, Tom and I witnessed to them and enjoyed a cup of tea together.

As the bishops began to gather for lunch, Roy began walking among them with his banner “Bishops, Stop Persecuting Gays” and I followed in alb and stole with mine, “Women Priests are Here.” I remember speaking to Cardinal Sean O’Malley of Boston. We were aware that this witness would be short-lived and soon we were told to stop.

Once outside, we decided to hold up our banners along the promenade by the harbor facing the hotel. Here and there, bishops came outside to smoke or walk by the water. They saw our signs and we spoke to them.  Several thanked us for our witness. I answered one bishop’s “Francis said ‘no’” with “It’s the Holy Spirit who calls us.”

A number of women and men gave us the thumbs up as they passed by and Roy gave them a copy of his letter to Pope Francis regarding gender justice in the church.  We spent time together talking about the Presidential election, politics and the church.

By 2:30 p.m. several buses drove up to take the bishops to their 5 o’clock mass at St. Peter Claver Church in West Baltimore, where there is tremendous poverty. Max told me this was the church where Phil Berrigan served as a Josephite priest. His funeral Mass was celebrated here and he was buried on the grounds of the Jonah House, a resistance community a couple of miles away where I go for Sunday liturgy. Roy and I decided to leave by 3 p.m. to prepare for our witness there. It was a blessing that Max took me to all the places yesterday and wrote out good directions, so Roy and I had no problem finding our way to the church.

After taking the lay of the land and some discussion, Roy felt strongly that he must do an action inside the church during the bishops’ Mass. I, on the other hand, felt my sign and voice could reach them as they drove up. So Roy went inside and I stayed outside. As the bishops’ eyes met mine, I remembered that 10 years had passed since my last time witnessing to them in the Capital. Now I was a priest of eight years.

Off the bus, the bishops went inside a building to change into their vestments and robes. Here and there, people passed by and were friendly. I felt safe like I did at St. Cyril’s as a girl. I was told that the bishops would be in view as they processed into the church. When they began their entrance, I stood by the gate and held my banner, “Women Priests Are Here,” my presence a visible sign of the existence of women priests.  They looked at me and many smiled. A few came up to greet me saying, “Bless you, sister.” I called out to them in a strong and firm yet unthreatening voice. “The Holy Spirit is calling you to speak out for women priests. The church needs the feminine. It needs women’s voices and leadership. Two-thirds of the world’s poor are women and their dependent children.. The Church needs to hear the Gospels interpreted from women’s lived experiences. “

As I turned my head, I saw Max standing nearby. What a joy to see him! He explained that after basketball, he had gone with others to a state senator’s office to urge her to sign on to a ban on fracking in Maryland. I asked him to hold my bag while I hurried to my car to get our ARCWP “Phoebe and Community” banner by Dina Cormick to show the bishops the history of women’s leadership in our church. He held it with me alongside the other banner as another group of bishops walked passed us. I heard one of them call my name. “Hello again, Janice,” he said, smiling. I’ll see you again tomorrow night,"  I turned quickly and asked Max who that bishop was. “Archbishop Tobin,” he replied. I turned and responded, “Okay, Archbishop Tobin,” recognizing that he will become a Cardinal this weekend. I would miss our vigil against killer drone research at Johns Hopkins University tomorrow night to be at St. Vincent de Paul’s for soup and bread with Catholic Workers and the bishops.

As the doors to the church closed, reporters and cameramen walked by and we chatted. I was hungry and it was cold. I asked Max to get me the blanket from his van. When he returned, I thanked him. I was warm again. We heard some singing from the church as I told Max about Roy’s intended action. Not long after Roy joined us. His faced looked angelic. He felt led by the Spirit, he said, to proclaim the message on his banner to the leaders of the US Church: “Bishops, Stop Persecuting Gays.” He said he had to pull himself and the banner away from a security guard before making his way to the altar. There he bowed down and kissed it before holding up the banner to the bishops and turning it to the people of God. Then, he said, two priests tried to pull the banner away from him and he felt like they attacked him. He was surprised because they were priests. He had expected them to just allow him to walk out. He based his expectation on what happened to a man who did a similar witness in Louisville, KY while he was there.

When Roy came outside, lots of plainclothes security followed him. Not long after he told us about his experience, six Baltimore policemen showed up. They were kind. Roy told them he had no intention of re-entering the church, and they were satisfied.

We stood with our signs for a short time as the bishops filed out, the night’s peace jarred by the deafening loudspeaker of a fringe character haranguing the bishops in an incomprehensible fashion. On the way for pizza, Roy told me he felt renewed by what had unfolded this day. “Yes,” I nodded.  I felt the same.
Posted by Bridget Mary Meehan at 12:56 PM

Roy and Janice, you are such visible witnesses to our cause and to the Spirit's call. May you continue your necessary work, even in the face of mounting odds. You give me hope for my ministry.
God bless and keep you both.
Peace,
Mary Kay

May God bless you both and all.
Gender justice is so overdue.
Thank you for this important witness.
Love,
Paki