https://www.ncronline.org/news/people/irish-priests-told-reform-takes-working-bishops-parishioners?utm_source=NOV_29_KELLY_ACP&utm_campaign=cc_112917&utm_medium=email
My Response: We met with Fr. Mark Patrick Hederman when we were in Ireland in August. This article points to the issue of the role of women and their full equality in the church. The full equality of women must include women in a renewed priestly ministry that is inclusive and empowered in the community of the baptized. Our model of a renewed priestly ministry is non-clerical. Our inclusive Catholic communities are living examples of what the Association of Catholic Priests )ACP) in Ireland is calling for  "a redesigning of ministry in the church, in order to incorporate the gifts, wisdom and expertise of the entire faith community, male and female."
Bridget Mary Meehan ARCWP, www.arcwp.org 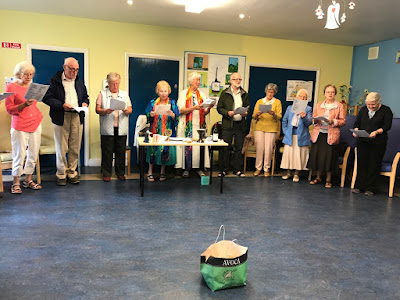 DUBLIN — Priests who are campaigning for liberal reforms within the church need to work harder to bring parishioners on board and quit arguing with bishops, according to one of Ireland's more progressive religious voices.
Fr. Mark Patrick Hederman, a prominent author and former abbot of Benedictine Glenstal Abbey, urged a Nov. 7 gathering of priests to become part of what he described as Pope Francis' "velvet revolution" to change the church.
He also told the Association of Catholic Priests (ACP), which represents about a quarter of Ireland's priests, that if they want to achieve reforms, they have to work with bishops rather than just criticizing them.
"If the ACP is trying to change things and to galvanize the bishops of this country into positive action, then even the most junior politician and unseasoned diplomat would tell them that they are going about it in the wrong way.
"Battering the beleaguered bishops is neither going to spur them into effective action nor is it going to hasten reconciliation," Hederman told the meeting of the priests in Athlone, County Westmeath.
The Association of Catholic Priests is calling for reforms within the church, including what it describes as "a redesigning of ministry in the church, in order to incorporate the gifts, wisdom and expertise of the entire faith community, male and female."
The organization has been particularly critical of members of the Irish hierarchy in the wake of a number of prominent Irish priests being disciplined by the Vatican's Congregation for the Doctrine of the Faith over accusations of teaching things that are contrary to the church.
Though the priests in question — including Redemptorist Fr. Tony Flannery — were disciplined before the 2013 election of Francis, the new papacy has not heralded a resolution to their situation.
Referring to the hierarchy, Hederman said, "If we want to get anything done in the Catholic Church in this country, we have to get them on our side."
He urged the priests to engage lay Catholics in an effective way, ahead of next year's expected papal visit to Ireland. Francis is expected to visit Ireland in August 2018 as part of the Vatican-sponsored World Meeting of Families to be held in Dublin.
"If it is true that Pope Francis is trying to effect a velvet revolution in the worldwide church, and if this revolution is to be carried out through the various synods which the bishops and priests are asked to convoke in every diocese, whereby the voices of all the faithful in the church can be heard, we cannot do without you. We need your help," Hederman said.
"If such initiatives, to consult with, and galvanize, the laity, are to be proliferated here in Ireland, this cannot happen without your enthusiastic commitment and support.
"In such an overall endeavor, the only possible logjams are where the priests fail to collect the data and the bishops fail to bring these to the attention of the pope. You alone can prevent either hijack, if prevention is possible," Hederman said.
The charism of the pope, he said, is to discern where the Holy Spirit is calling the church. "How can he [the pope] make that discernment unless as many voices as possible are heard and the substance of those utterances are brought back to him?" Hederman asked.
"As Pope Francis will be visiting Ireland next year, it is imperative that this work be completed, and you as priests are best placed to convoke your congregations and listen to them. Whence you can be the carriers of our messages to the bishops in the first place, and then to the pope, so that a renewed and more inclusive church may grace us all in this country for the rest of this century."
The Benedictine monk — who is among Ireland's best-known spiritual writers and retreat-givers — described his plan as "a new and daring exercise in infallibility: where the sensus fidelium [sense, or instinct of the faithful], that underutilized source of truth in the church, is activated and the Holy Spirit chooses from the multitude the one who will allow God's voice to be heard; and where the recognition of that voice, and the verification of its authenticity, belongs to the particular charism of the pope."
Meanwhile, the priests' association welcomed plans by Ireland's most-senior bishops to meet the organization to hear their concerns. Last week, the association received word from the Irish bishops' conference secretariat that Primate of All Ireland Archbishop Eamon Martin and Primate of Ireland Archbishop Diarmuid Martin had offered to meet the clerics early in January.

Redemptorist Fr. Gerry O'Connor, a member of the leadership team of the priests' association, said the offer to meet was a positive sign.
However, O'Connor also rejected Hederman's criticism of the association, saying members felt that the former abbot had "misread the ACP at several levels."
He said that Hederman "confused comments from individuals with comments from the ACP about bishops, and came across as someone who had not done his homework."
In a book earlier this year, Hederman, 72, provoked controversy when he said what he described as the church's "stifling teachings on sex" need to be dramatically modernized.
He also said that the church needs to address its subjugation of women and to open a discussion on sex, celibacy and ethics.
"Now that we have legislated for gay marriage and accepted the fact that sexuality does happen for reasons other than procreation; now that we also recognize that some of the most heinous sexual crimes have been perpetrated within the 'sanctity' of marriage; it is surely time to take a more comprehensive approach to the ethics of sexual behavior," he wrote in the book The Opal and the Pearl. The book takes its title from a letter from James Joyce to Nora Barnacle in 1909.
Hederman said in the book that Catholics who wish to remain "conservative and old-fashioned," should avoid being sectarian and supportive of values and lifestyles that have been rejected by the majority of 21st-century families.
"Otherwise we are categorized as out-of-date leftovers from a previous era," he wrote.
[Michael Kelly writes from Dublin.]

Posted by Bridget Mary Meehan at 8:55 AM