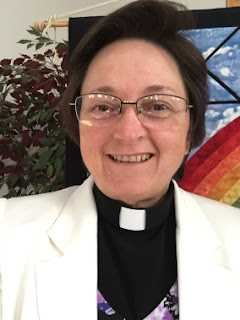 “It’s long past time for Christianity to stop insisting that the final word on Jesus has been spoken and that language and ideas of one century are to hold for all time. It’s time for Christianity to accept its responsibility to use the images, language and stories available to it in this century to articulate the Jesus experience. It’s time to begin to explore the basic insights of Jesus of Nazareth within the framework of the wisdom and knowledge that has been acquired over 20 centuries.”
Dawn Hutchings

Dawn Hutchings, a 21st Century Progressive Christian Pastor of Holy Cross Lutheran Church, in Newmarket, Ontario, Canada will lead the Association of Roman Catholic Women Priest’s annual retreat with the theme: Being LOVE in the World. Retreat sessions include: Practicing the Art of Religion in Days Such as These, Genesis to Jesus, and DIVINITY in, with, through, and beyond us.

Here is an excerpt from Pastor Dawn’s recent post:

For the last few hundred years, the Church has insisted upon articulating the Jesus story in words and images that have kept Jesus locked in the first, third, and if he’s lucky the sixteenth centuries. It’s a long, long way from the Road to Jericho to the pathway Jupiter. But just this week a space craft entered Jupiter’s orbit and next month we expect to see photographs from this distant part of our solar-system. We already have photographic evidence of billions and billions of stars, untold numbers of planets and yet we continue to articulate the experience of the life, death and resurrection of Jesus of Nazareth as if Adam and Eve actually emerged on earth without benefit of evolution. That these two mythical creatures somehow managed to tick off the Creator of ALL that is and ever shall be, to such an extent that this angry God kicked them out of paradise and cursed their descendants as humanity fell from grace into a state of sin, so objectionable that we can only be saved by the blood sacrifice of a first century itinerant Jewish Rabbi who just happened to be the perfect person who was willing to die to appease his tribal god, and unless we are willing to believe that this Jewish Rabbi is actually God, we are doomed to spend all of eternity in the fiery pits of hell and never make it up onto a fluffy cloud where celestial beings perpetually sing God’s praises. And we wonder why a generation is largely lost to the church.

We know full well that the earth is billions of years old. We know what’s up in the sky and we know what’s down below and yet we insist that God sit up on “his” thrown only to pass judgment upon us, as we look to Jesus to save us. But salvation is not about saving us from the wrath of a maniacal creator. Salvation is about setting us free. Free from our primitive notions of a three-tiered universe. Free from our fear of an all-powerful king god sitting in judgment upon us and manipulating the affairs of mortals at our whim. Free from ancient theologies about the fall, original sin, and sacrificial atonement, free from strict adherence to the law and free from a literal understanding of the ancient writings of our ancestors. Salvation is freedom from fear, and freedom to live and love and be all that our Creator created us to be. It’s long past time for Christianity to stop insisting that the final word on Jesus has been spoken and that language and ideas of one century are to hold for all time. It’s time for Christianity to accept its responsibility to use the images, language and stories available to it in this century to articulate the Jesus experience. It’s time to begin to explore the basic insights of Jesus of Nazareth within the framework of the wisdom and knowledge that has been acquired over 20 centuries.

Jesus spent the bulk of his ministry proclaiming that the reign of God was at hand. Jesus called people to believe the good news. Jesus believed that so many of his contemporaries were trapped in their beliefs about God and were looking for their experience of God in the wrong place. Jesus insisted that there were clear, unmistakable signs of God’s presence amongst us; when people act or see others act in ways that are good, truthful, loving, forgiving, just and merciful they should realize these are the sings of God’s Spirit present and active in the world. Jesus urged people to see the connection:  live in love and you live in God. Jesus identified, and wanted his sisters and brothers to identify, basic human interactions such as visiting one another, clothing the poor, caring for the needy, being ready to forgive, feeding children, over-coming cultural prejudices, respecting women, loving one’s neighbours as oneself, and being wholeheartedly generous as the rule of God. Jesus preached that the poor in spirit have a special insight into God’s reign. Jesus most likely experienced a capacity for generosity and sharing among the poor in Nazareth, an experience that deepened his conviction that the reign of God belonged to the poor in a special way. Jesus made it clear that there was no easy path to ushering in God’s reign. It demands purity of heart, a commitment to peace readiness to forgive, generosity, the endurance of persecution, truly being neighbour to those in need, moving beyond concern for one’s self, being ready to take the hard road. Jesus called for followers with large, loving, generous hearts. This should be the heart of the Gospel message Christianity shares with the world today.

The good news is that in everyday, decent human interaction all people encounter the sacred, the Spirit of God at work.   All people, not just Christians, are people in and through whom the Spirit acts so that God’s reign might be established. All people are God’s people. If we can begin to see the actions of decent human beings as the visible expressions of God’s presence among us, we will no longer be trapped in the fear of God. If we are fearful, our images of and ideas about God need changing.

Jesus by his use of images and parables, calls us to conversion in the way we think and act, wanting us to be set free from images, ideas, and religious practices that bind and enslave us into fear of God rather than help us to embrace God’s presence in our lives.  The extraordinary impact of Jesus’ actions and preaching on his followers moved them to articulate their basic religious convictions about life and God in new and compelling ways.