Twenty participants engaged in an open animated dialogue in naming the challenges and innovative strategies for empowering women in the Roman Catholic Church today at the Maldron Hotel at the Dublin Airport.  Joe Mulvaney, author of Speak Out for Reform in the Catholic Church from Dublin, Ireland welcomed and introduced the panel: Dr. Angela Hanley from Athlone, Ireland, author of Whose à la Carte Menu?: an Exploration of Catholic Themes in Context, Justified by Faith: an Irish Missionary Experience in Malawi, and co-editor (with Dr David Smith) of Quench not the Spirit, a book of essays to honour the late Fr Seán Fagan, Dr. Mary Theresa Streck ARCWP and Dr. Bridget Mary Meehan ARCWP from the United States.

Myra Noonan, from Dublin area, talked about the impact of her involvement in a course on women in scripture presented by People's Catholic Seminary and the value of interactive learning and community sharing with candidates from ARCWP on blogger and zoom.

Howard Thurman writes in his article ‘Mystic’, based on the 2nd edition of Barbara Holmes’ work Joy Unspeakable: Contemplative Practices of the Black Church; “In the inflated realm of mythical oppression, villains are so villainous that no one sees themselves reflected in the image. Few can trace accrued privileges to specific and intentional evil acts. Similarly, victims become so quintessentially and epically victimized that all escape routes from the condition are sealed off by a maze of self-doubt, blaming, and low self-esteem. The antidote to this phenomenon is to attend to the details, to understand the specific events, ancestors, life stories, causes of oppression, and avenues of social change. Historical and spiritual specificity is salvific. Then and only then can the movement toward moral flourishing begin.”[1]
I was blessed to meet Bridget Mary and Mary Theresa a year ago and I have to say my life has changed so much in that year. I embarked on a course of learning through the People’s Catholic Seminary and it was truly a wonderful and enlightening experience. Through monthly conferences on Zoom I met other like minded people who I never would have met ordinarily. We shared an interest in unearthing stories and hidden truths for the first time of the women who lived in the first century and breathed new life into the names Phoebe, Mary and Martha, Chloe, Lydia, Prisca, Mary Magdalene, Junia, and Mary Mother of Jesus. We met with these wonderful interesting flesh and blood characters and discovered how important and vital their roles were in the start of Christianity. I also came to appreciate that there are still many more characters to learn about waiting to be discovered. We got to know our ancestors for the first time through research and reading and sharing what we ourselves had found. It was an exciting and fruitful process. I realized knowledge is no longer reserved for the elite. It belongs to all of us. It was amazing how knowing the details of other women’s lives almost two thousand years ago could challenge me, inspire me, encourage me. It is truly difficult to complain about felt hardships and inconveniences when you learn how many times Prisca and her husband had to leave and set up home in a new place, establish new businesses and ties all the while serving a growing and developing church in its infancy. And how they did it with courage, consistency and such a strong faith?
Chester Beatty was a philanthropist who gathered artefacts from around the world. He built up a private library and on his death bequeathed his collection to the Irish people. In the Chester Beatty library, in the centre of Dublin, papyrus folios and fragments of Greek New Testament documents which he acquired, written as far back as 200 AD, are framed and presented in a row of nine. The last one in the line is a copy of Acts 17: 9-17. Beneath the weathered fragment, the written library information informs the reader that this piece from the Book of Acts “refers to the conversion of prominent Greek women” and continues by saying that this is “one of the few references to women in leadership roles in the New Testament.” I must admit I felt discomfort on reading this but did not fully appreciate why. Later reading the English text in the New Revised Standard Version Bible I found the Greek words from the ancient manuscript translated as; “11 These Jews were more receptive than those in Thessalonica, for they welcomed the message very eagerly and examined the scriptures every day to see whether these things were so. 12 Many of them therefore believed, including not a few Greek women and men of high standing.” This translation informed me why I felt discomfort on reading the information at the library. The evidence is there in the Bible. “Not a few Greek women.” No, not a few, more than a few. In fact, perhaps many more. Is it not possible that the commonly understood view that women were not predominantly leaders in the Early Church is  just a misperception and that indeed the spread of the early sect called Christianity owes just as much to the women as  well as to the men in the early years?
Within the last 100 years there has been a huge acquisition of knowledge that had been previously lost. Elizabeth Johnson in her book Quest for the Living God writes: “So compelling are these insights that rather than being hoarded by the local communities that first realized them, they are offered as a gift and a challenge to the worldwide church.  We are living in a golden age of discovery.”[2] The discovery of the Dead Sea Scrolls, the Gnostic Gospels of Nag Hamaddi, even the Gospel of Mary Magdalene in Cairo, all in the last century mean Christians have been given a unique insight into other historical realities apart from the Orthodox Church’s previous teachings.

The computer has opened up the world of Scripture to the ordinary person. No longer is Latin the language to be translated and interpreted. Anyone with an interest can read in their colloquial tongue what exactly modern day scholars have discovered in recent times. Often the presentation is straight and to the point not high brow and alienating, but available to all. Yet it continues to baffle me how educated people I speak to have no idea how  Phoebe of Cenchreae was entrusted to bring important letters from Greece to Rome. Or how  Lydia of Philippi risked social and business exclusion by insisting on giving shelter to Paul and his missionaries. They have no idea how Priscilla and Aquila were hugely important to Paul’s ministry in the early days of the movement with Prisca given pride of place by Paul in this relationship. They have no idea how Junia, who may have actually spent time with Jesus himself, was deliberately interpreted as a man’s name for centuries and now is considered by most investigative theologians to have  been a woman. I wonder how, when the facts are there in the Scriptures telling us intriguing details about these women, people still do not know of the importance of their lives. The simple truth is we have not been taught about them. Throughout my thirteen years of education in Roman Catholic schools in Ireland and all those Sundays at Mass, I cannot say I once remember hearing their names. I have only really grown to love and care for them as real living persons myself in the past year. But once you meet them you can never go back to forgetting about them. And why would you want to? Their stories are amazing and deserve to be told.
Out of the torn and dusty pages of words written long ago a new day is dawning, and new life is rising, one where we are called to be co-readers and co-learners and by sharing our experiences the Spirit of the written word can and will emerge. You do not need a doctorate to learn this information although indeed learning this information may bring some people down that path. This is open to all who wonder and hunger for what is true. I would encourage anyone who feels drawn to this learning to give it a try. I have found the rewards to be rich and fulfilling and only the start of more exciting learning to come. But also in the bigger scheme of things and referring to Howard Thurman’s statement. How salvific will it be for the Christian churches for the individual to attend to the details, to remember the true herstory?

[2] Elizabeth A. Johnson, Quest for the Living God.Mapping Frontiers in the Theology of God. (London: Continuum International Publishing Group,2007) 1.

Colm Holmes from We Are Church Ireland shared an enthusiastic endorsement of the Roman Catholic Women Priests Movement because he said that over the years he has seen the fruits of the Spirit in our ministries.

Angela Hanley presented the following insightful reflection on the ecclesial experience of the RC Church in Ireland.

Myra Noonan presented the following reflect about her experience in People's Catholic Seminary. 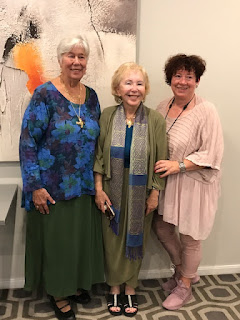 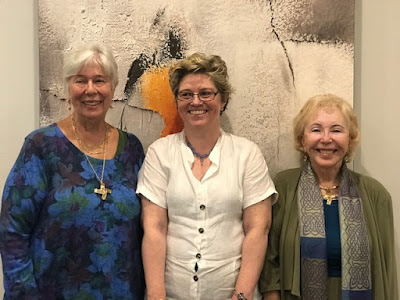