"A Bigger Role for Women in the Catholic Church? 185 Men Will Decide" By Elisabetta Povoledo, New York Times, My Response

My Response: This is hair on fire time!

To be credible Pope Francis has got to walk the walk toward equality for women in the church, not just talk the talk about the value of women in ministry who are doing diaconal service.   As usual there was plenty of talk at the Vatican about expanding women's roles and/or affirming what Amazonian women leaders are already doing in leading vibrant communities of faith there. Yet, no action. Worse yet, Amazonian women were not allowed to vote at this Synod no matter how much service or leadership they provided to their indigenous communities there.   "Discussions at the Synod of Bishops for the Amazon," according to the NY Times below, "have acknowledged that women must get recognition of some sort. But few expect real change."

A first step could be to offer public recognition of women's pastoral ministries that are already led by women. This includes, as Sister Nilma Do Carmo De Jesus, describes diaconal and priestly ministry in Brazil:

"In Brazil, most Catechists are women, the leaders of local communities are women, women animate the liturgical aspects of the Mass, through song and celebration, these women bring the ministry forward,” she said. “They are very important, but they are not visible because they don’t have institutional recognition.” 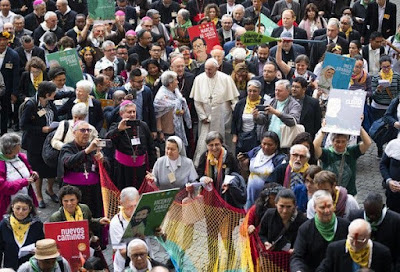 Pope Francis walking in procession on the occasion of the Amazon synod at the Vatican this month.Credit...Claudio Peri/EPA, via Shutterstock

·        Oct. 25, 2019Updated 4:54 p.m. ET
ROME — The Vatican’s extraordinary three-week meeting of bishops from the Amazon region, which ends this weekend, has generated intense debate within the church over the possibility of ordaining older, married men in remote areas.
But those gathered will also make important proposals about the role of the region’s women in the Roman Catholic Church. While a handful of those women have been present for the conversation, as usual, none of them will actually have a say.
That imbalance at the synod, as the meeting is known, has disappointed women from organizations that have been lobbying for the church to give women more decision-making power.
Instead, the decisions will be left to 185 men, who are discussing the possibility of women sharing pastoral responsibilities with priests or even the potential ordination of women deacons, a decision with broad theological implications.
Continue reading the main story
The final report, which will be presented Saturday to Pope Francis, will contain a series of proposals that the pope could endorse for the Amazon, but also apply to the entire church.
Those voting on the proposals include bishops, priests, and one religious brother, but no women, though nearly three dozen women were invited to take part as experts and auditors.
“A vote in the synod” for women “would be a first, and a huge change,” said Kate McElwee, the executive director of the Women’s Ordination Conference, who joined other Catholic women activists on Tuesday as they marched toward St. Peter’s Basilica.
They carried a banner that read, “Empowered Women Will Save the Earth, Empowered Women Will Save the Church.”
“We are here to remind the church hierarchy discussing what kind of ministry women could be doing that women are already working in priestly ministry,” said Miriam Duignan, one of the delegates from the Women’s Ordination Worldwide campaign, which organized the protest. The time has come for women deacons, she said.

“If we start in the Amazon, it will go elsewhere,” she said.
The Tablet, a British Catholic news weekly, reported this week that a proposal to ordain women deacons was included in the final report that will be put to the vote on Saturday. The proposal will require a two-thirds majority of the participants to pass.

Catholic activists working for greater gender equality in the church say that the bishops who are meeting to formally define women’s roles in the church in the Amazon need look no further than the reality on the ground.
That was the view of Sister Nilma Do Carmo De Jesus, a Brazilian-born Comboni missionary who is in Rome for a series of events highlighting the challenges facing the region.
“In Brazil, most Catechists are women, the leaders of local communities are women, women animate the liturgical aspects of the Mass, through song and celebration, these women bring the ministry forward,” she said. “They are very important, but they are not visible because they don’t have institutional recognition.”
Throughout the Amazon, many nuns are active fighting human trafficking, a common side effect of the large-scale logging and mining projects that are destroying the area’s natural resources, a major focus of the meeting.
“It’s a place where you can touch with your hand, the connection between the exploitation of human lives and the environment,” said Sister Gabriella Bottani, the international coordinator of Talitha kum, a global network of nuns working to end human trafficking. The group has been active throughout the pan-Amazon region.

The church, Sister Bottani said, had to begin treating women as equals, especially at the decision-making level, “otherwise the church is going to lose us.”
“It’s very clear that without the contribution of women, the church isn’t going to go very far,” echoed Sister Mary Agnes Mwangi, one of 10 religious women taking part in the synod with no voting rights, though their one male counterpart has them.
Often, she noted, ordained priests who ventured into remote areas found Catholic communities that had been fully formed by women. “Before the priest even gets to it, there have already been vocations for the seminary,” she laughed.
Some said the prospect of ordaining married men to the priesthood in the area would present challenges for the region’s women.
“If married priests go to displace women who are in leadership, then that’s very problematic,” said Deborah Rose-Milavec, the executive director of Future Church, an organization committed to advancing women in leadership roles in the Catholic Church.
Image

Cardinals attending a Mass led by Pope Francis to open a three-week synod of Amazonian bishops at the Vatican.Credit...Remo Casilli/Reuters
The church hierarchy, including Pope Francis, has made it clear in recent decades that ordaining women as priests is not on the table.
But some church historians have argued that there is evidence that women served in the role of deacon, an ordained minister, in the early church. Scholars have noted that in some countries and dioceses, women were ordained as deacons and considered clergy until the 12th century.
The Second Vatican Council of the 1960s allowed married men, generally over the age of 35, to be ordained as deacons. The pope has suggested in the past that he is open to discussing the issue, setting up a commission to examine the history of female deacons in the church.
But he has also indicated that it is unlikely to happen. In May, he told religious sisters meeting in Rome that further study was required.
There have been some timid signs that change may come.
Cardinal Cláudio Hummes of Brazil, whom Francis appointed as relator general, or chairman, of the synod, acknowledged the service of women in his opening address to the plenary.
Without elaborating, he asked that “there be an attempt to consolidate it with a suitable ministry for them,” drawing applause from the hall.
Others, like Erwin Kräutler, Retired Bishop of Xingu Brazil, who helped draft the working document of the synod, have gone further, openly advocating for a female diaconate.
“There’s a lot of support for it” among fellow bishops who find themselves short-handed, Bishop Derek Byrne of Brazil told the National Catholic Reporter.
ADVERTISEMENT
But many were doubtful that any change for women in the church would follow the synod.
“The indigenous women in the Amazon are already the leaders and ministers of their communities,” said Chantal Goetz, the founder of Voices of Faith, a movement that wants women to fill more leadership roles in the church.
For the church to not recognize that fully by ordaining women was unjust, she said.
“Honestly, I do not expect much outcome of this synod, only that we might get a new wave of exodus again,’’ Ms. Goetz said. ‘‘More women will leave the Church.”
Posted by Bridget Mary Meehan at 6:30 PM