When God Gave Up on Humans by Jan Phillips

It came to pass, in the 21st century, that God gave up on the human race. He scrawled his message across the sky in words that were understood by every tribe and nation:

“You are on your own. In 20 centuries, you have failed to love each other. You use me as a reason to hate and kill. You endanger your children. You poison your planet. I am done with you. You’ll have to find me in each other from now on.”

The people on earth wept and worried. “What will become of us?” they wondered. “Who will we run to? Who will provide for us? How will I find my car keys?” they asked, throwing up their arms in despair.

Over the years, even the adults had become like children in their notions of God. While every holy book encouraged them to find God in themselves and each other, they insisted on keeping God up in the heavens. They made God responsible for everything, saying ” God did this” and “God did that.” As long as God was the Heavenly Father, they could act as children, and they did.

When the sky bulletin came, people flocked to the churches and temples to see what to do. But no one there had an answer, for they, too, had kept God high upon a cloud, referring to God as “up there” or “out there.” It was God who made miracles, they preached. God who made the rules, God who punished, God who gave men all the power. They, too, were like children and were lost without God.

Years passed, seasons changed, and life on earth changed dramatically when God left the people on earth. There was a great sadness, except for the few who claimed they had felt all along that God dwelt within them. Those people had no sadness, and in fact, quite the opposite occurred. They were secretly relieved that the people stopped calling out God’s name for their reasons to hate and hurt others. Once God disappeared, people stopped fighting over what God meant in the Bible or the Koran. There was no point in fighting over God if God wasn’t even around. If there was no God, there was nobody condemning anyone’s behavior, no more infidels, no reason to take “an eye for an eye.”

People stopped seeking out priests and caliphs, rabbis and ministers, for there was no God for them to mediate. They sought out, instead, the people who were joyful and calm in this time of abandonment, thinking they must know something special and secret to be so happy.

One such person was a woman who sat under a tree in a village.

“How can you be so happy when God has left us?” a villager asked her.

“Only that God who was far away has left,” she answered. “The spark inside still remains. It is our breath. That, to me, is God. It is the love within. If I am breathing, I am being breathed by God. For that, I am joyful, for I am not alone.”

A soldier came to the woman, put down his gun and sat beside her.

“I have been a patriot. I have gone to war for God and my country. I do not understand why God has left me. I do not know what to do.”

She smiled and took his hand. “Those ideas in your head, you have learned from someone else. Have you learned to listen to the voice within?

“I do not know what the voice inside me has to say,” he said.

“Then you must sit with someone and tell your story, for only then will you hear it. And when you are done with your story, listen to the story of the one who heard you. Be real when you speak, and be ready when you listen, for it is in that conversation that you will find the answer for your next move.” 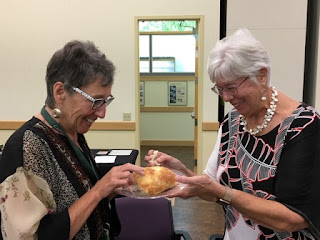 The wise woman under the tree counseled people through the day, as did all the wise women in towns and villages around the world. They addressed the people’s fears of living without God and reminded everyone that God lived right inside them. Over and over, they held the hands of fearful people saying “an old myth is dying but a new one is being born.”

They helped people grow up with a view of the Holy One deep within. They passed on secrets about finding the sacred in the sap of a maple, the flow of a river, the majesty of a mountain, and the people, in time, grew reverent toward the Earth.

They stopped asking questions like “What is your religion?” or “Have you been saved?” for everyone knew the other was holy and a spark of that Flame they once called God.

People learned to share their stories, to listen to their hearts and help each other. They changed their ways, replenished the soil, cleaned the waters, and harnessed the powers of Wind and Sun.

Over time, the people grew up and saw the light. Wars stopped as Allah/God was welcomed home in the hearts of the people.

Once they found God in themselves and each other, the people rejoiced and were glad. They were free at last, bowing in joy to the Earth and all creatures.