Video of homily:https://www.youtube.com/watch?v=NggGT6_-0Ks
Text below pics 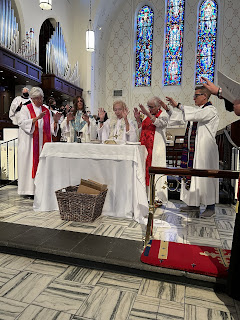 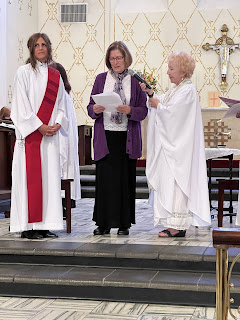 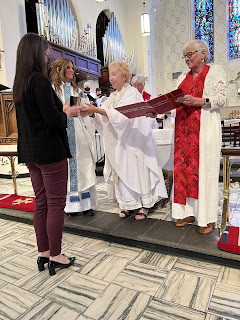 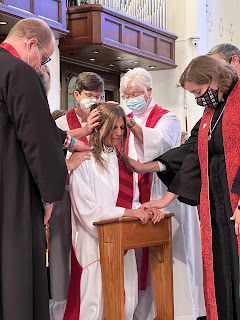 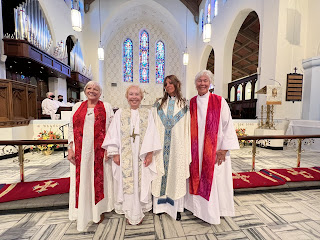 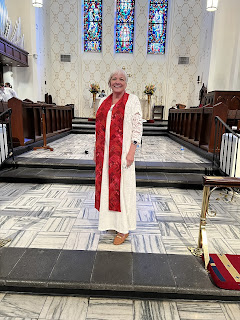 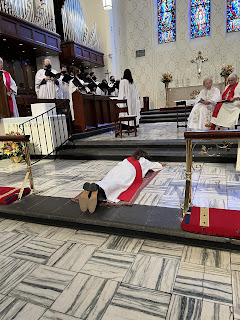 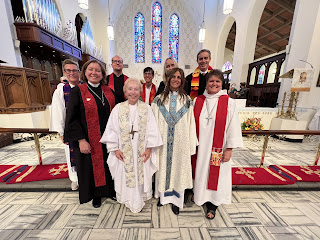 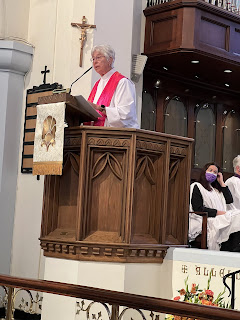 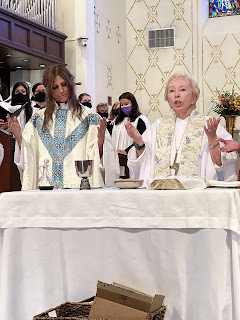 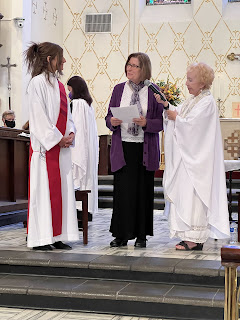 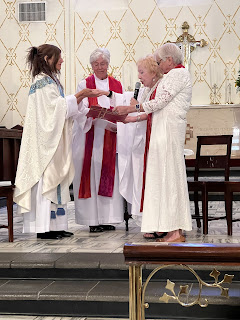 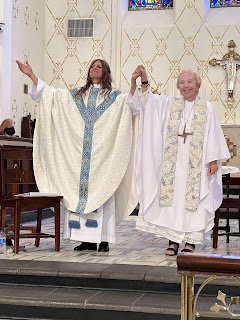 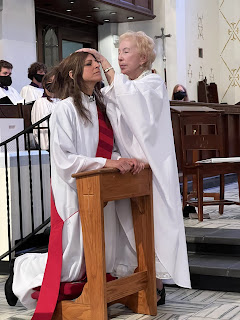 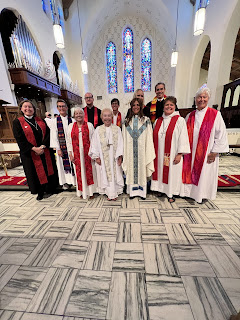 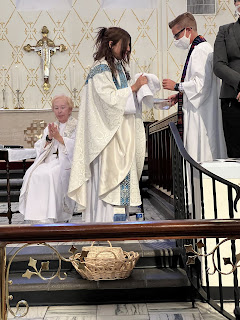 This is the day God has made let us rejoice and be glad in it as the Association of Roman Catholic Women Priests ordains Anne Tropeano as a priest in Albuquerque, New Mexico.

Anne describes her call to Ordination and her hopes for her future ministry in these words:

“After 12 life-giving and challenging years of prayer and ministry alongside Jesuits, I was finally able to let go of the Society of Jesus so that I could fully pursue my call as a priest. I am grateful for all the hardship, the heartbreak and ultimately the strength and healing. Though I cannot join the Society of Jesus, the Jesuit charism will always permeate my heart and ministry, and I look forward to continually becoming who God desires me to be.”

The words of the prophet Jeremiah echo in her heart: “Before I formed you in the womb, I chose you, before you were born, I dedicated you…Now go wherever I send you and say whatever I command you. Do not fear anyone, for I am with you to protect you.” (Jeremiah 1: 5, 7-8)

As an ordained priest, Anne plans to build a community in the Jesuit tradition for Roman Catholics who desire a Church that is inclusive, vibrant, innovative and committed to social and environmental justice. She will start in November by offering a weekly Contemplative Mass on Sunday evenings. As the community grows, she will lead them in discerning their own unique call to justice and support them in living out this call. Anne is also personally committed to seeing the teaching on ordination change before she passes away. She will continue to work with community organizers like Women’s Ordination Conference and with God’s people to pressure the Pope and Bishops to bring the teaching on ordination into alignment with the Church’s message of justice and equality for all people.

Anne chose the story of the Galilean woman suffering for twelve years with a vaginal hemorrhage as the Gospel for her Ordination.

According to Jewish cultic law, menstruation was a time of uncleanness and any discharge of blood from a woman outside her period made her unclean (Lv 15:25). Hence, for twelve years this woman not only suffered because of her condition but, she was also cut off from relationships and activities with other people. Anyone and anything she touched became ritually unclean.

As the Gospel story unfolds, the daring woman who approaches Jesus, does not ask Jesus for healing, but touches Jesus, knowing she will be healed. Immediately she was cured of her hemorrhage. After her healing, Jesus asks who touched him. Jesus bids her stand forth as a person of importance—a Woman of Faith! Affectionately he calls her, “My Daughter,” and praises her, telling her that it is her faith that has brought about her healing. He affirms her place in the community, and at the same time repudiates the purification rituals of the law-bound religious structures of his time!

Like this daring woman, who challenged patriarchal norms, Catholic women, like Anne, who are following their Spirit-filled call to Ordination incur the Church’s severest punishment: automatic excommunication.

In the Updated Code of Canon Law promulgated in June 1 2021, Pope Francis failed to revise Canon 1379 which officially places the ordination of a woman and the sexual abuse of a child in the same category of “grave crimes” against the Church.

Roman Catholic Women Priests reject the penalty of excommunication. Like Jeremiah, Miriam, Martin Luther King Jr., Rosa Parks, Dorothy Day and many other prophets of justice, we are disobeying an unjust law that discriminates against women called to serve God’s people in a renewed priestly ministry. As the first letter of Peter counsels, “Don’t fear what they fear. Don’t be afraid and don’t worry.” (1 Peter 3:14)

Roman Catholic Women Priests, are not leaving the Church. We are leading the Church we love towards living Jesus’s message that everyone is blessed, and everyone is loved, including rule breakers!”

We hold up heroic women like Hildegard of Bingen, Joan of Arc, Mother Theodore Guerin and Mother Mary Mackillop who followed their consciences and withstood hierarchical oppression including interdict, excommunication and death.

In our times, Pope Benedict canonized the two formerly excommunicated nuns, Mother Theodore Guerin from the United States and Mother Mary MacKillop from Australia. Apparently, excommunication is not a barrier to sainthood!

While the Church officially teaches that a law of the church is authoritative only if it is "received" by the sensus fidelium, the community of faith, this mandate is not implemented by the hierarchy.

According to the Women’s Ordination website, a growing number of Catholics support women in ordained ministry in France (83%), Spain (78%), Argentina (60%), Italy (59%), Brazil (54%), and in the U.S. (64%) https://www.womensordination.org/resources-old/fact-sheet-on-catholic-womens-ordination/

Therefore, it is obvious since Catholics worldwide- including many theologians and some bishops- have not “received” the teaching prohibiting women’s ordination, it is not authoritative, and can be changed!

This is why we are here with all of you who gathered with us today.

We owe a debt of gratitude to you, our sister and brother priests and ministers in Christian denominations who have ordained women in the 19th and 20th centuries. As we celebrate this Ordination in the Episcopal Cathedral today, we remember the seismic breakthrough for gender equality that occurred when the Episcopal Church in the United States officially ordained women priests in 1974. It is a joy to be here in this sacred space with all of you!

We are also grateful to our sisters from the Women’s Ordination Conference, who are with us today, for their persistent, prophetic advocacy for the full equality of women as equal partners in ministry in the Roman Catholic Church!

The international RCWP movement began in 2002 with the ordination of seven women on the Danube. Our first women bishops were ordained by an anonymous male bishop with apostolic succession.

There are two groups in the U.S.: Roman Catholic Womenpriests-USA (RCWP-USA) and the Association of Roman Catholic Women Priests (ARCWP). Women priests are ministering in over 34  states in the U.S. and are also present in Canada, Europe, South and Central America, South Africa, Philippines and Taiwan. In 2021, there are approximately 300 members in the international movement.

We welcome everyone to celebrate Eucharist and all the sacraments in our inclusive communities and ministries including those who are excluded from receiving sacraments in the institutional Church like the divorced and remarried and LGBTQI. We live Gospel equality now by following the teachings and example of Jesus who taught that the God of justice sets us free to love and to set others free from laws and structures that oppress and discriminate

The Roman Catholic Women Priests Movement is a holy shakeup of love that is transforming the Church into a people-empowered community of spiritual equals in Christ!

As we ordain Anne a priest today, let us rejoice in a new birthing of the Spirit in the Roman Catholic Church today!

Here we are, we are ready

Posted by Bridget Mary Meehan at 5:03 AM