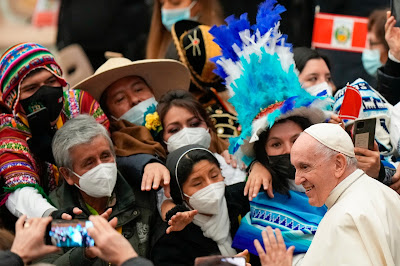 In an article published by the Associated Press entitled “Women Urge Vatican to Sign Europe Rights Convention,” Nicole Winfield reports that Catholic Women's groups are urging the Vatican to sign an agreement protecting human rights and banning discrimination based on race, religion, gender or political beliefs.
Even though this commitment to human rights has been ratified by 47 European states, the Vatican won’t sign this commitment because the hierarchy promotes policies that discriminate against baptized members in the Church who follow their consciences including women priests who are promoting spiritual renewal and transformative justice in inclusive ministries and communities around the world.
In the recent update of Canon Law, Pope Francis failed to correct the mischaracterization of the ordination of a woman priest as a "grave crime" that is in the same category as clerical sex abuse.
The real "grave crime" against the Church is not committed by women following their call to sacred orders, but, by the Vatican hierarchy who covered-up decades of clergy sexual abuse of minors around the world.
The excommunication of prophetic women living a renewed priestly ministry in people-empowered faith communities is an outrageous injustice that should alarm Catholics everywhere.
While Pope Francis is a strong advocate of human rights on social justice issues such as the plight of migrants, he does not connect the full  equality of women in the Church and in the world as interrelated to poverty, violence, environmental degradation, and the flourishing of life on the planet.
We owe a debt of gratitude to the following European women's groups, named in the article, for advocating that the Vatican sign this document supporting human rights for everyone, everywhere: "Catholic Women Speak in Britain; We Are Church in Ireland, Germany and Austria; Women for the Church in Italy; Voices of Faith in Rome and Liechtenstein, as well as similar progressive Catholic groups in Spain, France, Croatia and Switzerland."
Posted by Bridget Mary Meehan at 12:09 PM