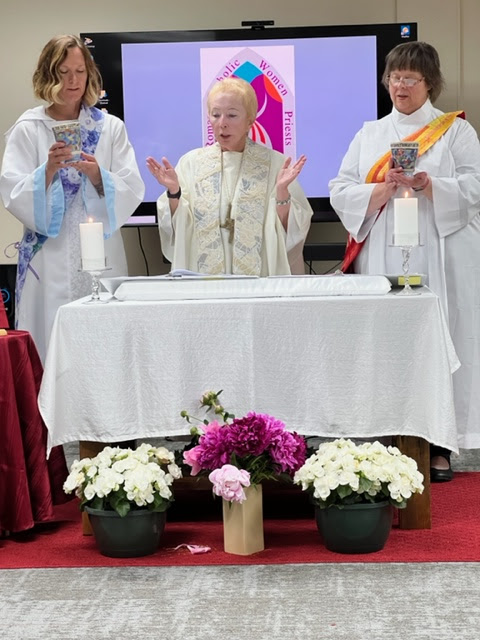 It is a joy to be in the Upper Room to celebrate the diaconate ordination of Katie and Mary Ann.

In Romans – chapter 16 - Paul commends deacon Phoebe, apostle Junia, and missionary Prisca as women of authority, responsibility and influence in the Jesus movement.  Phoebe’s prominence is evident because she is first on a list of 29 persons cited in this letter. Scholars believe that Phoebe may have delivered Paul’s letter to the Christian community in Rome.

In the first 1200 years of Church history, thousands of women were ordained deacons to preach, baptize, anoint, preside at the Eucharistic table in house churches and serve people in need.

As Pope’ Francis Commission on Restoring the Diaconate concludes, they could say: “The Church has always taught, women were among Jesus’ closest followers and helped to spread the gospel in early Christian communities, so today we are reclaiming our ancient tradition of ordaining women as deacons!

Aren’t you glad that we don’t have to wait for the institutional Church to act? Our ARCWP mission is to lead the Church forward by ordaining women deacons, priests and bishops to make gender equality a reality now. Grounded in Jesus’ example and the legacy of women- like apostle Mary of Magdala and deacon Phoebe-we have the spiritual authority and responsibility to ordain women now.

Time and time again women show up and do the work that needs to be done.  Typically they do this work quietly, in unassuming ways. I think of Juanita, Evadell, Barbara, Lucy and Margaret…all women who showed up week after week to do the work of Christ with their hands… with their hearts…with their presence…

You know them.  These are the women who meet people where they are…in homeless encampments, in grief support groups, on the border with Mexico, in the kitchens, in hospitals, in food pantries and nursing homes.  These women become the hands and feet of the Divine.  They live the gospel with their hearts…with their hands…with their presence…

We live in a world that is out of balance.  It has been out of balance for along time, as those in power sought to eradicate the feminine from her place alongside men as apostles like Junia and Magdalene,  and deacons like Phoebe and others.  For the life of me I can’t understand the “Why” in their design.  The feminine compliments the masculine, bringing much needed qualities like compassion, inclusion, and love in action.  It is no wonder that our world has lost its balance.

The invitation in this moment is to restore that balance.

We are at a place when history is being made each and every day and the world seems to be standing on the edge at times. Just as in those days after Jesus’s death and resurrection when a strange newness was happening, there is an awakening happening today and we dream possibilities for a future where women stand alongside men around eucharistic tables where Divine Presence is celebrated. We seek an equal voice.  We seek an equal seat at the table.   We are living a new chapter of history.   A chapter filled with uncertainty. A chapter as yet untold, and yet if we will seek the Holy Spirit and invite the inspiration that comes forth in our hearts we will all be drawn into a ministry filled with love, hope, compassion, and inclusion.   May it be so.  Amen.