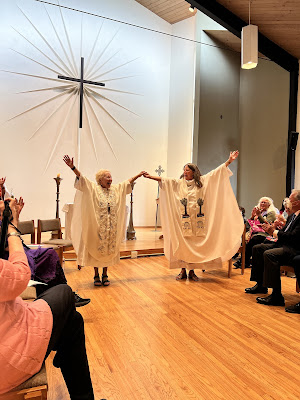 It is with great joy that we gather to ordain Rosemary Robinson a priest in the Association of Roman Catholic Women Priests in San Francisco today!

Rosemary describes her call to ordination as rooted in her relationship with Jesus who invites her to serve at his table of love, friendship and welcome. She has been blessed with the gift of hospitality and will use her gifts to serve the Body of Christ and to welcome everyone to the table of love.

In many wonderful ways, women priests are following in the footsteps of the earliest followers of Jesus in the first two centuries after his death.

Recent thrilling discoveries have revealed a major two-hundred- year- old gap between the historical Jesus and Christianity. In 2013, Westar, a research organization dedicated to cutting edge scholarship in history and religion, launched a seminar to explore the unknown two centuries between Jesus and Christianity.

They did not find a master narrative “that Christianity acted as a unified, continuous early tradition in unbroken line representing a single truth.” Instead, their research pointed to “multiple and different stories of Jesus peoples (not Christian) in the first two centuries.

The Seminar’s six major discoveries about the Jesus peoples in the first two centuries are published in After Jesus,Before Christianity: A Historical Exploration of the First Two Centuries of Jesus Movements (2021) and will be the subject of a new course offered by People’s Catholic Seminary in October.

1, The first similarity is: Jesus peoples were characterized by their opposition to violence and courageous resistance to the Roman Empire. The Gospel of Mary, for instance, offers comfort and strength in a time of trauma, loss and oppression.

Like the Jesus peoples, the RCWP Movement challenges the domination of empires-specifically, male supremacy -in the institutional church.  We claim our spiritual authority to ordain women priests for public ministry in diverse, inclusive communities to promote the full equality of women in the Church and world. We connect racism with sexism, poverty with inequality, hierarchical domination with female subordination, and LGBTQI discrimination and violence with the abuse of women, children and the destruction of the earth. All reflect different  aspects of patriarchal, structural oppression, abuse and domination.

2. The second similarity is: Jesus peoples practiced gender bending. They experimented with gender and sexual boundaries. They were neither male nor female, but all were “one” through different lived, experienced realities of gender pluralism.

Our women priest movement affirms all gender identities as holy and every person as an equal image of the Divine. In Christ, there is no Jew or Greek, slave or free, male or female. All are one in Christ Jesus. Galatians 3:27-28

3. The third similarity is: Jesus peoples lived in chosen families outside of blood or married relationships.  They experimented with new kinds of associations, clubs and wisdom schools.

In women priests’ inclusive communities, everyone is welcome to receive sacraments - including those ostracized by the institutional Church, the divorced and remarried, LGBTQI. As James Joyce wrote- being Catholic means “here comes everyone!”

4. The fourth similarity is Jesus people treasured their Jewish identity and followed  Jesus, their Jewish born teacher and leader

We follow Rabbi Jesus who treated women as disciples and equals. We walk in the footsteps of Mary Magdalene, apostle to the apostles and visionary leader in the Jesus movement. We are leading not leaving the Church.

According to additional historical research published in the Harvard Theological Review, contemporary scholars believe that Mary whom we call Mary Magdalene is not Mary from Magdala. The word magdala in Aramaic means tower.  It is a title, not.a place.

In their examination of ancient sources, the story in John 11 is about Lazarus and one sister, Mary. They argue that neither Tertullian nor Egeria’s diary mentions Martha. When Lazarus is raised from the dead, it is Mary who says the same words that Peter uttered in the synoptic Gospels, “Yes, Lord. I believe that you are the Messiah, the son of God, the one who is coming into the world.”

Rev. Diana Butler Bass raises the provocative question, “Is it really true that the other Christological confession of the New Testament comes from the voice of Mary Magdalene? That  the Gospel of John give the most important statement in the entirety of the New Testament, not to man, but to a really important woman who will show up later as the first witness to the resurrection…Imagine that possibility that is opening before us!...What dos the church look like? What does a Christianity of Mary the Tower look like?”(Article “Mary the Tower: What would Christianity be like if Mary Magdalene hadn’t ben hidden from view?”)

5. The  fifth similarity between the first two centuries and our movement is that the early Annointed Communities of Jesus peoples had diverse organizational structures with a variety of practices, beliefs and organizational patterns.

There are two women priests communities formed in the USA : Roman Catholic Womenpriests-USA (RCWP-USA) and the Association of Roman Catholic Women Priests (ARCWP). Both organizations share a common vision of ordaining women for a renewed priestly ministry, but, each group has different organizational structures and programs of preparation. Women priests and their local faith communities are autonomous and independent and  reflect a rich diversity of beliefs, practices and organizational patters.

6. The sixth similarity between the first two centuries and our times is that the Jesus peoples had persisting oral traditions.

There were “many forms of speaking and writing that were part of boisterous, complicated community dialogue, ritual practice and most of all- intense discussion.”

During our twenty-year history, members of our women priest movement have engaged in many lively dialogues, and passionate debates topics like our identity as Roman Catholic on the inside edge of the Church.  We use listservs, blogs, videos and social media to communicate with one another and to preach, teach and share liturgical services and resources.

As we ordain Rosemary today, we are walking in the footsteps of the earliest followers of Jesus. We have come full circle.

Millions of Catholics are ready for women priests. We are ready and so is Rosemary!

​“Before I formed you in the womb I knew you, before you were born I dedicated you, a prophet to the nations I appointed you.” As I sat on that porch in the Fall of 1981, God knew exactly who was about to be born. Scripture tells us this. The God of love calls us into being.  Each new life filled with hopes and dreams and promise.  Each new life blessed with unique gifts and talents. Gifts and talents to be used in the service of love.

​As I stand before you today, on the cusp of being ordained a Roman Catholic Woman Priest, I wonder if my parents had any inkling that ordination would be a part of my life. As a mother, I held each of my newborn sons and wondered, “Who will you be in the world?” As a grandmother, I held each of my newborn grandchildren and wondered, “What gifts will you bring to a world so in need of love?”

​St. Paul reminds us to “stir into flame the gift of God” that we have received.  I love that image “stir into flame.” Stir into flame! Let us set the world on fire, together, each one of us, using our gifts so that we can be love in the world. We are the salt of the earth! Do we bring flavor and seasoning to a hungry world? Or do we let our gifts whither and lose their flavor by not using them?

​Together, as we move to the table of love, may we pray for the grace to be light, to be love to all we encounter.  Let the people say, Amen!