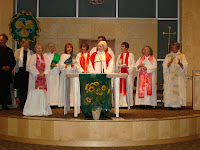 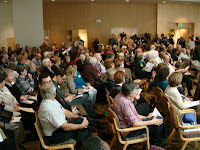 Making spiritual martyrs is probably why he got promoted out of the diocese. Rome had to stop him. They can't really discipline him because he is using the powers given him as a Bishop. Rome does not want a loose "canon" like him (forgive the pun} pointing out how regressive the Church is to the media and making these excommunications a flash point for Catholics. In this year of evangelization, controversy is not wanted. How can you evangelize to Protestants and Jews who have moved ahead into the twenty-first century with female priests, ministers and rabbis. These "excommunications" and "disciplines" may satisfy the bloodlust of Catho-fascists but will not serve to bring more bodies in to fill the pews and coffers. After all, suppose there were no more laity left? Who would pay all these Cardinals' salaries and fancy new vestments. People are drawn by messages of love and forgiveness, not revenge and punishment for minor misdeeds. Can you imagine how it appears to potential converts that women are excommunicated for exercising their call to the priesthood, yet pedophile priests keep the luxury of receiving communion despite their heinous crimes against society?