My Response to the Vatican letter that asks Sisters of St. Joseph of Carondelet to Rome for 'prayerful conversation' by Dan Stockman/National Catholic Reporter: 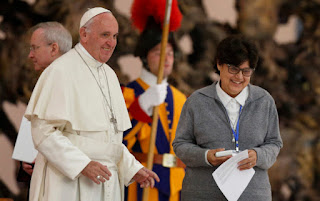 http://globalsistersreport.org/news/trends/vatican-letter-asks-sisters-st-joseph-carondelet-rome-prayerful-conversation-40556
Bridget Mary's Response: According to this National Catholic Reporter article, about 15 communities have been invited to a Vatican dialogue on areas of dissent: "from the Church's moral teaching or approved liturgical practice".

I thought the Vatican investigation of the U.S. religious orders was over! Didn't the Vatican learn its lesson: don't mess with the nuns? In city after city, hundreds of Catholics took to the streets to show their support for the Nuns on the Bus and the ministries of the courageous, dedicated Sisters who have educated and cared for millions of Catholics through the years.  Is this another example of the Vatican as the gift that keeps on giving? I don't get it!
Seriously, what is the Vatican trying to do? Single out a  "bad girls" list of  Religious Orders that don't conform to church teaching on "hot button" issues such as birth control, abortion, gay marriage, women priests,etc. The church teaches that one must follow one's conscience in all moral decisions. Is this a last ditch effort on the  Vatican's part to  pressure the nuns to support teachings that violate their religious freedom?

Will the Vatican force religious congregations to relinquish their canonical status,  the good housekeeping seal of approval by the institutional church unless they conform to official church teaching on these and other issues?  Or will the religious congregations finally say "enough is enough" and liberate themselves from the yoke of Vatican patriarchal control in order to live Gospel freedom and integrity ?
Pope Francis is full of wonderful surprises!  So, I am hopeful  that he can stop this train wreck from happening.  In a respectful, prayerful  conversation, perhaps, the Vatican officials involved in this dialogue will comprehend the legacy of love, compassion, faith and hope that the women in these Religious Orders bring to the table. Perhaps, this will be an opportunity for mutual growth and spiritual sharing versus ecclesiastical "nit-picking" over the nuns' perceived failures to follow
magisterial teaching?  Just imagine Jesus, the rule breaker, at the Vatican participating in this dialogue!
As baptized members of the church,  the Sisters and their brothers in the Vatican hierarchy, are spiritual equals. The nuns, including the Orders on this recent "Vatican hit list", have spoken truth to power in their prophetic witness on many issues. They have not supported the hierarchy's policies of discrimination against LGBTI and have spoken out on environmental healing, poverty, economic justice and sexual exploitation etc.
I hope this upcoming Vatican dialogue will promote Gospel equality as the Sisters  speak truth to power on the elephant in the church's living room-  the full equality of women as priests and decison-makers in all ministries of the church.  Pope Francis and the Vatican hierarchy need to listen to the voice of God, speaking through the the Sisters if the church is to be credible and to flourish in the 21st century.
Bridget Mary Meehan, sofiabmm@aol.com, www.arcwp.org
"The Sisters of St. Joseph of Carondelet are among the recipients of letters from the Vatican asking congregations to explain matters learned during the apostolic visitation.
About 15 communities of U.S. Catholic sisters are being asked to provide the Vatican with further clarification in the aftermath of the controversial, six-year investigation. The apostolic visitation was announced in 2009, and a final report of the six-year process was released in December 2014.
In addition to the Sisters of St. Joseph of Carondelet, the Sisters of Charity of the Blessed Virgin Mary and the Loretto Sisters also received letters from the Congregation for Institutes of Consecrated Life and Societies of Apostolic Life (CICLSAL).
Both the Loretto Sisters and the Sisters of St. Joseph were invited to Rome to discuss the matters at meetings in October.  The Loretto Sisters' meeting is scheduled Oct. 18. The timing of the Sisters of St. Joseph meeting in October is tentative, the letter said. The Sisters of Charity of the Blessed Virgin Mary were only asked to provide a written response.
The Sisters of St. Joseph said in a statement their letter invited them to Rome for a "prayerful conversation" about "a few points mentioned in the letter." The statement did not say what those points were, and congregational leaders declined to say anything beyond the issued statement.
A copy of the subsequent letter sent by leadership to Sisters of St. Joseph of Carondelet sisters was obtained by Global Sisters Report. It says that all CSJ Province Leadership Teams received the same letter from CICLSAL and quotes from it on five matters "voicing the following concerns":

• Your desire to help bring about an 'emerging new form of religious life';
• Your evaluation of the way you promote the spiritual and community life of the congregation, in light of the Church's definition of apostolic religious life;
• Your Congregation's policy regarding members of the community who are known to hold positions of dissent from the Church's moral teaching or approved liturgical practice;
• The identity and role of lay associates/consociates, assuring the distinction between vowed religious life and laity.
• We also urge you to evaluate your efforts to promote 'communion with creation', especially in light of Pope Francis' encyclical Laudato si, a comprehensive presentation on the responsible care of creation, in view of integrating its principles enunciated in the encyclical into your current efforts in this area.

The congregation's statement said the letter was presented as a follow-up to the on-site visit to the order in St. Paul, Minnesota, in late 2010. The congregation's leadership team discussed whether to accept or decline the summons, but decided the "benefits outweigh the challenges of expense and some inconvenience."
The statement said the way sisters conducted themselves during the apostolic visitation and an even more controversial investigation by the Congregation for the Doctrine of the Faith showed the value of remaining engaged to resolve differences and misunderstandings between sisters and the church hierarchy.
"We want to 'stay at the table' and participate in respectful dialogue. We want to communicate by our behavior that we see ourselves as their partners in continuing Christ's mission," the statement said. "It is also potentially an opportunity for the staff of CICLSAL to deepen their understanding of women religious in our country."
The Loretto Sisters were asked to report on five so-called "areas of concern," including:

• Your way of promoting the spiritual and community life of the congregation, in light of the Church's definition of apostolic religious life;
• A certain ambiguity regarding the congregation's adherence to some areas of Church doctrine and morality;
• Your Congregation's policy regarding members of the community who are known to hold positions of dissent from the Church's moral teaching or approved liturgical practice.

The Sisters of Charity of the Blessed Virgin Mary were asked in a letter they described as "friendly" to respond to the office's continued concern over the order's "public dissent of Church teaching."
Sr. Teri Hadro, president of the order, said the Vatican interprets things as dissent that are actually just different ordering of priorities, citing the U.S. Conference of Catholic Bishops' spending the last decade making abortion its primary cause, while many U.S. women religious congregations have focused on issues like food, water and shelter for marginalized populations.
[Dan Stockman is national correspondent for Global Sisters Report. Follow him on Twitter @DanStockman or on Facebook.]
Posted by Bridget Mary Meehan at 2:48 PM

So appreciate Bridget Mary Meehan's thoughtful and intelligent response. Its justified frustration tempered with pointed good humor speaks truths the Vatican needs to hear if it is to compassionately serve the needs of the universal Church!