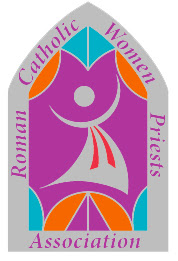 Like Pope Francis who says no to an economy of exclusion, women priests say no to a church of exclusion.
Like Pope Francis who promotes an economy of inclusion, women priests promote a church of inclusion.
Like Pope Francis who challenges global economic inequality, women priests challenge the church’s gender inequality.
Global economic equality is related to women’s empowerment and equality in church and society.
Roman Catholic Women Priests are a renewal, justice movement within the Catholic Church.
We are serving inclusive Catholic communities where all are welcome to receive sacraments.
We are a non-clerical movement that offers the church an egalitarian, partnership with the community of the baptized.
Our mission is to serve especially those whom the Vatican marginalizes. (33 million Catholics have left the church that is quite a "target group" that has been abandoned by institution. )
We reject excommunication. No punishment can separate us from Christ or cancel our baptism. No church authority can separate us from God.
This is our church and we are not leaving it. (no matter what the Vatican says or does.)
(The Vatican's official line is that our excommunicate is the automatic type, by your choice, you have excommunicated yourself)
The Church that treat women as second-class citizens violate God's will.
Genesis 1:27: God created humanity in God's image, in the divine image, God created them, male and female God created them.  Galations 3:27 St. Paul reminds us that by our baptism there is neither male nor female, all are one in Christ.
Roman Catholic Women Priests have valid orders. Our first bishops were ordained by a male bishop in apostolic succession.
Pope Benedict canonized two excommunicated two nuns (Theodore Guerin and Mary McKillop)
We hope that Pope Francis will chart a new path toward human equality in our church by opening all ministries to women. If women were priests, we would see an end to the church's policy on contraception.  Primacy of conscience is an important church teaching that all must follow in moral decisions.
The hierarchy must make the connection between discrimination against women in the church and violence , abuse and inequality toward  women in the world.
Like these courageous women we are faithful Catholics leading the church to become more just and live Jesus example of Gospel equality.
Jesus called women and men to be disciples. (Luke 8:1-3) Jesus did not ordain anyone.
The Risen Christ called Mary Magdala to be the apostle to the apostles. She was the first to proclaim the central message of Christianity, the Resurrection.
Vatican/ (hierarchy) should follow Jesus’ example of Gospel equality and the early church’s tradition of women in liturgical leadership as deacons, priests and bishops.
Background For 1200 years women were ordained. (Gary Macy, The Hidden History of Women’s Ordination, Dorothy Irvin’s archaeological evidence etc.) “In the early centuries of Christianity, ordination was the process and the ceremony by which one moved to any new ministry (ordo) in the community. By this definition, women were in fact ordained into several ministries. A radical change in the definition of ordination during the eleventh and twelfth centuries not only removed women from the ordained ministry, but also attempted to eradicate any memory of women's ordination in the past. …However, the triumph of a new definition of ordination as the bestowal of power, particularly the power to confect the Eucharist, so thoroughly dominated western thought and practice by the thirteenth century that the earlier concept of ordination was almost completely erased.. References to the ordination of women exist in papal, episcopal and theological documents of the time, and the rites for these ordinations have survived.” Gary Macy, The Hidden History of Women’s Ordination)
The Vatican and Google have created a virtual tour of catacombs including two frescoes in St. Priscilla’s catacomb that provide evidence of ancient women deacons and priests in first centuries of church’s history.  (One fresco depicts a woman deacon in the center vested in a dalmatic, her arms raised in the orans position for public worship.  In the same scene there is a bishop being ordained a  priest by a bishop seated I a chair. She is vested in an alb, chasuble, and amice, and holding a gospel scroll.  The third woman in the painting is wearing the same robe as the bishop on the left and is sitting in the same type of chair. ) In another fresco in the Catacombs of Priscilla, women are conducting a Eucharistic banquet. This evidence portrays women in liturgical roles and vestments. 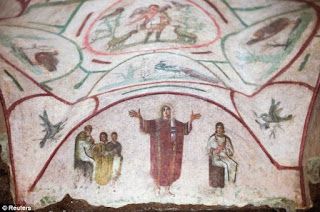 There are two RCWP groups in the United States, each has its own administrative structure. They are not administratively connected.
ARCWP’s vision is a renewed priestly ministry within a Roman Catholic Community of equals.
ARCWP is an international group without regional territories. Presently, ARCWP is in the United States, South America, and Canada.
Our common mission with RCWP-USA  is a renewed priestly ministry in an inclusive church. Both ARCWP and RCWP-USA collaborate, communicate and share resources on a regular basis.
We have a prayer circle and a common chat listserve.
We collaborate on major reform movement events such as the celebration of liturgy at Call to Action National Conference.
Posted by Bridget Mary Meehan at 8:52 AM