Fr. Pat Mahon said that he along with two other married priests provide Eucharist for St Christopher’s Faith Community which Fr. Mike Gallagher started about 20 years ago, especially for devoiced and remarried Catholic’s and others who were alienated from the Church.  Over the years St. Christopher’s has attracted Episcopalians, Lutherans, Methodists and others on the journey of faith. Off season participants number about 50 and during the season about 150 participants. They are in need of an additional priest to help with Liturgy because Mike Gallagher is 83 and is dealing with some health issues.
Wanda (Russell ARCWP) and I went down the following weekend, experienced their faith community at worship and then shared a wonderful dinner. We brought some literature for them including Pink Smoke Over The Vatican.  Pat said he would prepare the people to receive Women Priests.  The following weekend he gave a wonderful homily on their need for an additional priest and women’s call to priesthood. See beautiful homily below.

Miriam Picconi ARCWP Co-Presides at Liturgy on Nov 16th with Fr. Mike
On Saturday, November 16th I concelebrated Eucharist with Fr. Mike. He started the liturgy and gave most of the homily and then invited me to share with the congregation.  We celebrated together at the altar and the people joined in the Eucharistic prayer.  It was truly an awesome experience.   For this time Wanda was a greeter and passed out flyers on our ministry and the flyer on ARCWP. 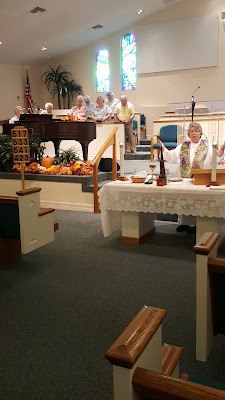 Before and after the Liturgy people were most gracious in welcoming us. The warmth and acceptance was almost overwhelming. We felt right at home. We are now committed to the third Saturday of every month. Wanda and I will concelebrate in December.