"A Wrinkle in Time"-Review of Movie- by Eric Sunrup SJ ,Ignatian Guide to "Wrinkle in time"/America 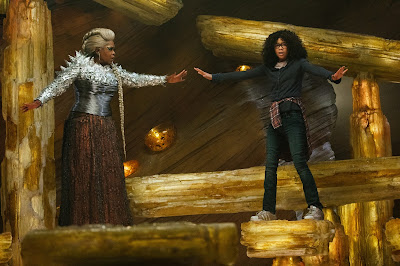 I watched “A Wrinkle in Time” sitting next to a religious sister in full habit. I was disguised in civilian garb, so it was less obvious that I was a Jesuit priest. By the end of the film, I felt a tinge of guilt. I should have been in clerics—wearing all my commitments visibly—because this film was inviting all of us to wear our hearts on our sleeves, to be honest and unabashedly earnest, to hope.
It is a demanding task for adults in the age of Trump, and much to their credit, I think the children will have an easier time of it. We need to pay attention to them.
I imagine many critics will not be satisfied with “A Wrinkle In Time.” It is not for cynics; it is almost anti-cynic. While, admittedly, some of the film’s dialogue and world-building is uneven, to really benefit from the film, you have to approach it with a sense of love and forgiveness and be willing to presume the best of the filmmakers. A critic might rightfully see some flaws in this film, but the task facing the viewer echoes the task placed before Meg Murray (Storm Reid), the young protagonist.
RELATED STORIES

The faith journey at the heart of ‘A Wrinkle in Time’
Sean Salai, S.J.

How the Spiritual Exercises can help non-Catholics
Sean Salai, S.J.
Meg struggles to hold onto hope. She is thrown into a cosmic battle, alongside her younger brother Charles Wallace (Deric McCabe) and Calvin (Levi Miller), the popular kid from school. With the help of Mrs. Who (Mindy Kaling), Mrs. Whatsit (Reese Witherspoon) and Mrs. Which (Oprah Winfrey) they are transported to distant galaxies to try to save Meg’s father, Alex Murray (Chris Pine), from the IT, the source of darkness in the universe. Like the book from which it was adapted, the film is foremost about the hope that springs from love. And that is why you should see it and, if you have children, why you should take them to see it.
Viewers familiar with the novel on which the film is based may note that Disney’s adaptation removed most of the overtly Christian references found in the book in order to ensure the widest possible appeal, but even so, Christians will find themes that still retain some of Madeleine L'Engle’s original connection to Christianity. So when Mrs. Who quotes OutKast but not Jesus, I will forgive the screenwriters.
If you have ever dabbled in Ignatian spirituality, there is a lot to marvel at in this movie.


The film’s plot is about the messengers of the light fighting against the dark. The internal struggles of Meg, Calvin and Charles Wallace have cosmic significance. And, if we choose, we can look at our own struggles with those same glasses. The first week of the Spiritual Exercises intentionally asks thea retreatant to imagine oneself as part of the much larger and historical battle between darkness and light.
Even so, the removal of the Christian touches that are so central to the source material of “A Wrinkle In Time” may lead to accusations that the film is an anthem to moralistic, therapeutic deism. For this reason, when compared to the original book, this particular movie adaptation seems to be more of an appetizer than a main course when it comes to theology and philosophy.
Still, if you have ever dabbled in Ignatian spirituality, there is a lot to marvel at in this movie. When Mrs. Which explains how the darkness works to rob us of our potential, it is a wonderful and captivating explanation of the tricks of the evil spirit. In one instructive scene, Mrs. Which shows Meg the memories of the three young children and their school teachers. The memories serve as examples of how we lose hope and listen to the voice of “the accuser” that tells us we are not enough or that we do not measure up. And if Oprah explaining hope makes you groan, I refer you to the previous paragraphs. Feel free to reread them as often as needed; repetition is a key method used in the Spiritual Exercises. For my part, I will definitely use that scene next time I am presenting on Ignatian prayer. A key tenet of this type of prayer is to be attentive to the fact that God can speak to us in our memories and imaginations.
A truly Ignatian guide to the film would encourage people to see this movie as a way into our emotions.At the screening I attended, the director, Ava DuVernay, appeared in a pre-filmed segment to tell us that this type of film is especially important in “these divisive times.” After two hours of wonder that allowed me to tap back into some of the most important feelings of my own childhood, I could not agree more.
“A Wrinkle In Time” does not try to defuse emotional moments with snark or asides. Neither will a good Ignatian spiritual director. God speaks to us in those raw, unprotected emotions. The filmmakers continually asks how the world should be, with an earnestness that is almost painful. The question is relentless, and I had to fight a desire to scream at the young protagonists, “But the world is too broken, you’ll realize this and give up when you get older.”
A truly Ignatian guide to the film would encourage people to see this movie as a way into our emotions. We can watch it with a spirit of imagination and earnestly explore the themes of the film, or we can hedge our bets and protect ourselves from the fear of being embarrassed by our raw, childlike potential for wonder and amazement—that wild-eyed part of us that imagines we might actually be able to save the entire universe with love.
Protecting ourselves from these emotions is at the heart of the invitation of the IT, the evil that dwells in the center of the darkness. If we take no chances, we will not ever be embarrassed or have our hearts broken. Sadly, we will not be able to love either. Christians (and perhaps even OutKast) have a name for that place; we call it hell.
Posted by Bridget Mary Meehan at 12:07 PM