Activists Participate in weeklong fast calling on the U.S. to Stop Support for the Murderous War in Yemen and Close the Prison Camp at Guantanamo 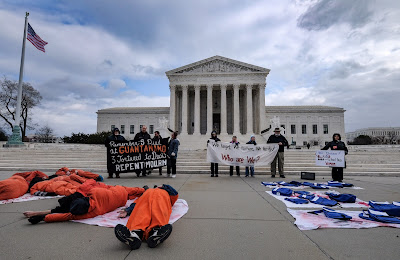 On January 9, 2019, five human rights activists protesting all forms of torture were arrested while bannering on the Supreme Court steps. Their banner stated: “We Target. We Torture. We Terrify,” followed by the question “Who Are We?”
Joining them were dozens of protesters who formed a tableau to denounce US-backed war on Yemen and call for closure of Guantanamo.
Alongside the banner, 36 children’s bookbags were scattered atop bloodied shrouds.. Each backpack bore the name of a Yemeni child killed on August 9, 2019 when a Saudi warplane dropped a Lockheed Martin 500 lb. laser guided bomb on their school bus. Remembering the nine prisoners who died in Guantanamo, activists clad in jumpsuits and hoods laid down on bloodied shrouds, across from the backpacks.
While Supreme Court security guards handcuffed those holding the banner, supporters sang:
“Know where you stand. No more war. Know where you stand and stand there.”
Explaining why she chose to risk arrest, Ellen Graves, a social worker from Western Massachusetts said she is troubled by grotesque practices that have starved, maimed, dismembered and traumatized Yemeni children. Graves and many of the other activists have gathered for a week of fasting and action that marks January 11, the seventeenth year since Muslim men have been imprisoned in Guantanamo. “The misery of Muslim people continues,” said Dr. Maha Hilal after reading the names of the Yemeni children being commemorated along with the names of nine Muslim men who have died in Guantanamo.
https://popularresistance.org/witness-against-torture-activists-arrested-for-sit-in-at-senator-mcconnells-offic