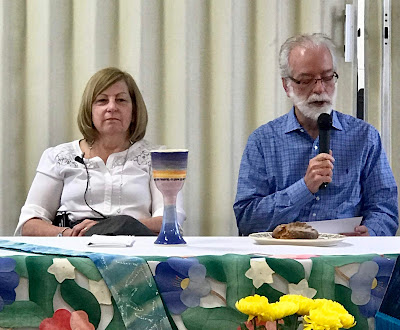 Lynn Kinlan, ARCWP, and Bernie Kinlan led the Upper Room Liturgy for the Second Sunday in Easter Season. The theme for the liturgy comes straight from the second reading - the idea of Easter as the triumph of love in the midst of suffering. As we read and reflect on these selections, we might try to place ourselves with the crowd of believers in the Upper Room trembling behind closed doors. Theirs is a grief filled Holy Saturday experience until they are transformed by faith and hope into new people beckoned by the generosity of Jesus saying, "Peace be with you."  Lynn’s homily reflection is printed below the readings. 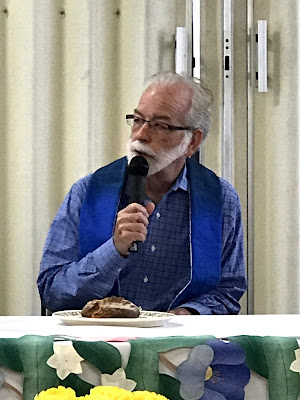 Presider 1: We gather blessed by this Easter season, enlivened by the rains of April and May that bring blooming and growing and greenery.

Presider 2: The steady drizzle, the light mist, the heavy downpour bring us to new life and  gratitude for our place in an ever sprouting Creation.

Presider 1: We yearn to listen with ears that hear the love of Jesus in today’s readings, to see the Spirit of God in our Eucharistic sharing and to sense the peace that Jesus promises.

First Reading from the Acts of the Apostles

Through the hands of the apostles, many signs and wonders occurred among the people. By mutual agreement, they used to meet in Solomon’s porch. But none of the others dared to join them, despite the fact that the people held the apostles in great esteem.

Even so, more and more believers, women and men in great numbers, were continually added to their community – to the extent that people even carried their sick relatives and friends into the street and laid them on cots and mattresses in the hope that when Peter passed by, his shadow might fall on one or another of them.

Crowds from the towns around Jerusalem would gather too, bringing their sick and those who were troubled by unclean spirits, and they were all being healed.

These are the inspired words from Acts and we affirm them by saying, Amen.

When we look in the gospels, the stories are all over the place. There’s no resurrection story in Mark, just an empty tomb. Those who claim to know whether or not it happened are kidding themselves. But that empty tomb symbolizes that the ultimate love in our lives cannot be crucified and killed. For me, it’s impossible to tell the story of Easter without also telling the story of the cross. The crucifixion is a first century lynching. It couldn’t be more pertinent to our world today.

But crucifixion isn’t something that God is orchestrating from upstairs. The pervasive idea of an abusive God-father who sends his own kid to the cross so God could forgive people is nuts. For me, the cross is an enactment of our human hatred. But what happens on Easter is the triumph of love in the midst of suffering. Isn’t that reason for hope?
Something was struggling to be born on that first Easter. It burst forth in ways that changed the world forever. Today…spiritual ground around us is shaking…We are in the midst of a spiritual crisis and a spiritual flexibility in our time. And what will emerge?

These are the inspired words of disciple Serene Jones and we affirm them by saying, Amen.

Mary of Magdala went to the disciples. “I have seen the Teacher!” she announced. Then she reported what had been told to her. In the evening of that same day, the doors were locked in the room where the disciples were, for fear of the Temple authorities.

Jesus came and stood among them and said, “Peace be with you.” Having said this, Jesus showed them the marks of crucifixion. The disciples were filled with joy when they saw Jesus, who said to them again, Peace be with you. As Abba God sent me, so I’m sending you.”
After saying this, Jesus breathed on them and said, “Receive the Holy Spirit. If you forgive anyone’s sins, they are forgiven. If you retain anyone’s sins they are retained.”

It happened that one of the twelve, Thomas was absent when Jesus came. The other disciples kept telling him, “We’ve seen Jesus!”
Thomas’ answer was I’ll never believe it without putting my finger in the nail marks and my hand into the spear wound.”

On the eighth day, the disciples were once more in the room, and this time Thomas was with them. Despite the locked doors, Jesus came and stood before them, saying, “Peace be with you.”

Then to Thomas, Jesus said, “Take your finger and examine my hands. Put your hand into my side. Don’t persist in your unbelief but believe!”
Thomas said in response, “My savior and my God!”

Jesus said, “You’ve become a believer because you saw me. Blessed are those who have not seen and yet have believed.”

Jesus performed many other signs as well – signs not recorded here –in the presence of his disciples. But these have been recorded to help you believe that Jesus is the Messiah, the Only Begotten, so that by believing you may have life in Jesus’ name.

These are the inspired words of disciple John and we affirm them by saying, Amen. 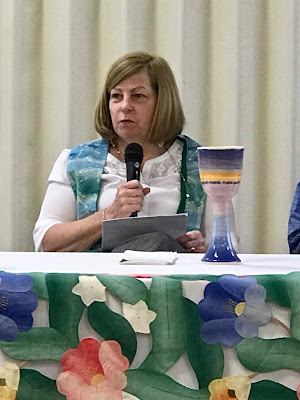 follow me” or maybe you are Salome, the woman who met Jesus at the well and ran to share his promise of ‘living water” with others, joining others who travelled around with him. Or perhaps, you are one of the rich women and men who financed the nomadic travels of Jesus’ ministry and left behind a comfortable life. Maybe you are Mary of Magdala, the beloved companion who has seen the tomb empty and has talked to Jesus and practically no one believes you. All of you walked dusty roads to Jerusalem for Jesus’ last Passover because he touched your hearts and made you feel more love and possibility than you ever before known.


And now, he is gone… in the most humiliating, bloody and violent way that the Roman oppressors could dream up. And are they coming for us next? Let’s hide in the Upper Room. Oh, and be sure to lock the doors.

Maybe, like Peter or James some of us are feeling guilty. Could we have done more? Why didn’t I stay awake with him in the Garden? Days of self-recrimination and sleepless nights have left us scared to death and despairing.

Perhaps, like Mary of Magdala we are confused and angry and doubting ourselves because only a few of these companions on the journey believe in my story of Jesus risen. How powerless I feel and should I leave for Galilee in the morning as Jesus asked even if it is without Peter and the others?

Mostly, we hug and cry because we miss him. Did he really have to die so young? And what comes next? Were these years for nothing? What do I do, go back to fishing? I don’t even have a net or a boat anymore.

Jesus being Jesus. Meeting people where they need him. Meeting us whenever we need him. Loving us in life and death. And challenging us, sending us out to continue the ministry with the Holy Spirit of willingness and possibility and love. Jesus insists on forgiving and seeing the best in us. Do we dare see it in ourselves? Do we dare to believe in a better world we have not yet seen? Or, do we resign ourselves to living in Holy Saturday forever, without hope that we can do as Jesus has done and continues to do?

Peter rose from the guilt of Good Friday and the fear of Holy Saturday and his disbelief in the testimony of Mary of Magdala to be held in such great esteem that people hoped his mere shadow, his healing touch could make all the difference. We gather in our own Upper Room, the doors not locked, to be hopeful people, rising from self-doubt and despair into the hope of new life . We seek to make a difference toward the better world and the better church we have not yet seen but in which we believe. Because we who love know that our human frailties are beside the point. Love is brave and powerful and filled to the brim with hope. Our love, the Spirit of God incarnate in Jesus will always and everywhere triumph over frailty, loss and suffering. 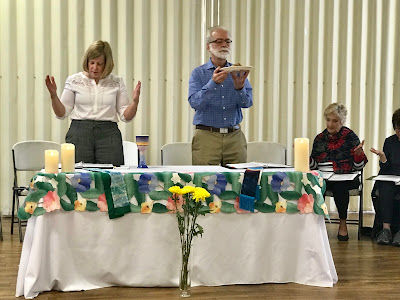 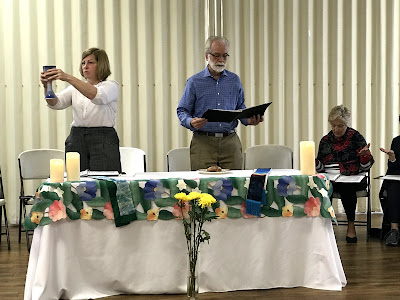 Blessing of the Prayer Shawls

Lynn: The first few prayer shawls have now been completed by our prayer shawl ministry group and will be given to those in need of the warmth and blessing it offers. Please bring the shawls to the middle of the circle and hold them out, our community will bless them, sending our heartfelt prayers with them. 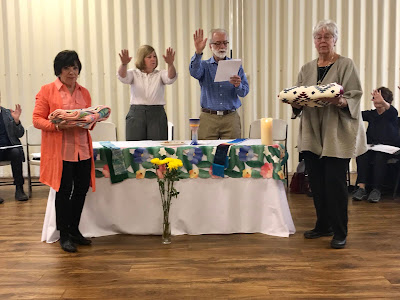 Bernie and Lynn: Thankful for this ministry in our community, we add our blessing to the work of the craftswomen who kindly and prayerfully completed the shawls.  We send the shawls to those in need of warmth and respite in the midst of illness or injury. We pray that the embracing love of the Holy One may be with them to bring comfort and wellness of spirit. Amen.

Posted by Bridget Mary Meehan at 7:05 AM