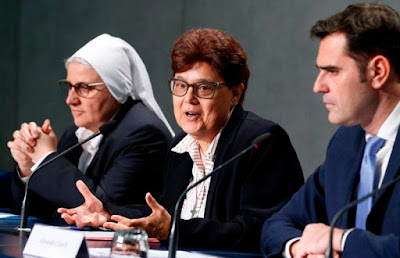 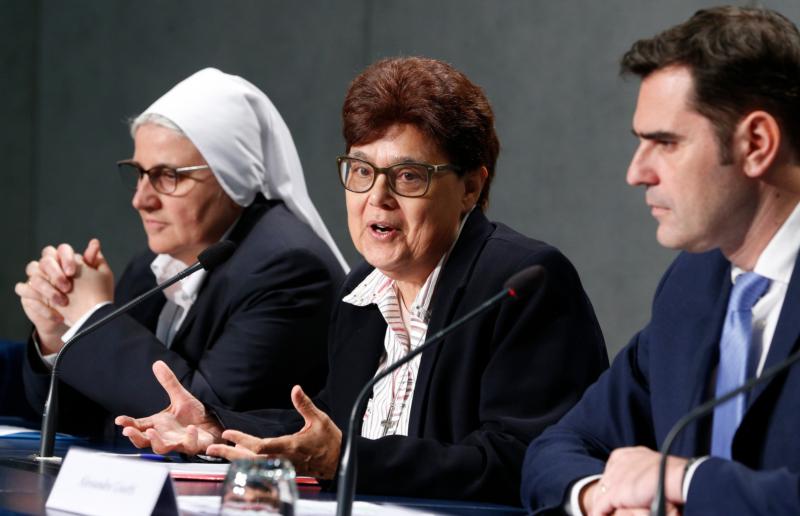 Sister Carmen Sammut, center, superior of the Missionary Sisters of Our Lady of Africa and president of the International Union of Superiors General, speaks at a news conference at the Vatican May 2, 2019. Pope Francis is scheduled to meet May 10 with the heads of more than 800 women’s religious orders who are in Rome for plenary meetings. Also pictured are Sister Donatella Zoia, superior of the Sisters of the Precious Blood, and Alessandro Gisotti, interim Vatican spokesman. (CNS photo/Paul Haring)

VATICAN CITY (CNS) — The Vatican can move at a snail’s pace but looking back over the past six years, the profile of women, especially women religious, at Vatican events has risen sharply.

The Roman Curia is not teeming with women leaders and Pope Francis has given no indication, for example, that he will open the diaconate to women, but women are taking center stage more often and doing so with the “parrhesia” or boldness Pope Francis encourages.

And rather than having to beg for a hearing, members of the International Union of Superiors General — leaders of some 450,000 women religious around the world — are regularly invited now to Vatican meetings at every level.


Sister Carmen Sammut, UISG president and superior of the Missionary Sisters of Our Lady of Africa, told reporters May 2 “with the Vatican dicasteries, many things have changed” over the past six years.

“We have, in fact, been knocking on doors, and doors have been slowly opening” at the Synod of Bishops and at the meetings of Vatican congregations and councils, she said.

Vatican offices, she said, “are much more open, more user-friendly.”

“It seems each year they listen a little more and follow through more on our ideas,” Sister Hodgdon said.

Vatican officials, she said, are realizing more and more that women have some of the skills and experience they need, and the sisters are realizing how they can be “prophetic in different ways.”

One example is the Way of the Cross meditations written for Pope Francis’ celebration at Rome’s Colosseum by Consolata Sister Eugenia Bonetti, a pioneer in the ministry of women religious to victims of human trafficking, particularly those forced into the sex trade.

Sister Bonetti’s meditations for Good Friday were prayerful and pious, but also explicitly condemned men who go to prostitutes, governments who have slammed their borders closed against migrants and refugees, and Catholics who prefer to look the other way in both situations.

Another moment of holy feminine boldness came during the February summit on child protection at the Vatican when Sister Veronica Openibo, congregational leader of the Society of the Holy Child Jesus, told Pope Francis and the presidents of the world’s bishops’ conferences that the hypocrisy of Catholic leaders who claimed to be guardians of morality yet remained silent about clerical sexual abuse has left the church’s credibility in shambles.


A small sign of the changing status of women also can be seen in the pope’s interaction with participants at the UISG plenary meetings, which are held every three years in Rome. Pope Francis was scheduled to meet with some 850 women leading religious orders May 10.

The first plenary he addressed, in 2013, was held just two months after his election. The superiors were excited by the new energy the new pope brought and his renewed focus on the serving the poor, which was and is their forte.

But the women were the audience, not the protagonists of the meeting, with the pope giving a speech that included a quip about the women religious not being “spinsters” or “old maids,” which brought laughter, but didn’t sit well with everyone.

Three years later, in 2016, the format of the UISG meeting with the pope had changed. This time the sisters asked challenging questions and the pope responded.

“I like hearing your questions because they make me think,” the pope told the superiors general at the May 2016 meeting. “I feel like a goalie, who is standing there waiting for the ball and not knowing where it’s going to come from.”

Describing the questions as courageous, Pope Francis was asked, among other things, about: opportunities for women to preach; the importance of involving women in church decision making, especially when the decisions impact women; and handling requests from bishops and priests looking for free labor from religious orders.

But the most newsworthy question was whether he’d be willing to set up a commission to explore the roles of the women identified as deacons in the New Testament and to try to tackle the question of whether they were ordained or simply “blessed” in some way for service.

The pope accepted the challenge and less than three months later, appointed 12 scholars, six women and six men, to a study commission. Two members of the commission said in January that their work had been completed and a report given to Pope Francis.


While the pope has given no indication of what he will do with the report and what the next steps might be, the UISG plenary was a timely reminder that the issue is still out there.

Another ongoing issue involves not just the presence of women religious at gatherings of the Synod of Bishops, but the possibility that one day they may have a vote in the assemblies like the religious brothers elected by the men’s Union of Superiors General.

Even more importantly, the UISG has become much more vocal about the sexual and psychological abuse women religious have suffered at the hands of priests and about the obligation their members have to work to end the abuse of child and vulnerable adults in the church and society.

Sister Sammut said the UISG plenary will include steps to help every religious order develop “protocols and codes of conduct,” especially for working with children and vulnerable adults.

When the superiors of religious orders speak about abuse openly and honestly, she said, they create a climate in which their members, who may have been harassed or abused by a priest, feel more at ease discussing their experiences.

One thing that is essential, Sister Sammut said, is that women religious “don’t understand obedience in a way of saying ‘yes’ to somebody who is going to abuse you. This is terrible. Religious obedience is something completely different.”
Posted by Bridget Mary Meehan at 1:59 PM