Pope Francis Says Commission on Women Deacons Did Not Reach Agreement, My Response- The Spirit is Moving in inclusive Catholic Communities Living Jesus' Example of Equality and Empowerment of Women Now 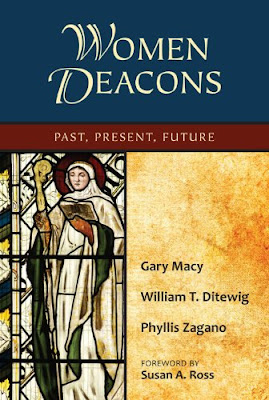 But, the pope said, “there is no certainty that theirs was an ordination with the same formula and the same finality of the male ordination.”

What concerns me most about Pope Francis' rejection of women deacons is the spiritual arrogance that the ordination of women deacons somehow could not be as valid as that of male deacons.   In spite of the historical studies to the contrary, the male dominated, clerical institutional church cannot imagine that women are spiritual equals in Christ and that their ministries are equally blessed and fruitful. Catholics, who value Jesus' teaching and example of Gospel equality and empowerment of women, have been and will continue to serve the people of God in inclusive communities of faith where all are welcome to celebrate sacraments. Our Roman Catholic Women Priests Movement is offering fresh hope for a renewed church by ordaining women to serve God's people in communities of equals. Our call is to live as prophets of the future by leading the way to a more open, loving, justice-seeking and equal, inclusive Church now. Bridget Mary Meehan ARCWP, https://arcwp.org , sofiabmm@aol.com, 703-505-0004


Ms. Zagano said, “There was ordination…. The most interesting evidence is the fact that the ordination ceremonies [we discovered] for women deacons were identical to the ordination ceremonies for men.”
Father Pottier said then that he was able to find strong evidence of women deacons in church records and histories, but “not everywhere and not always because it was also a choice of the [local] bishop.”
The pope did not tell reporters what steps, if any, would come next on the subject of a women’s diaconate.
He told reporters, “Today, no one says so, but 30 years ago some theologians were saying that there were no deaconesses because women were in second rank in the church and not only in the church.” But, Francis said, “this is curious because in that epoch there were many pagan priestesses; the female priesthood in pagan cults was something usual.”
The pope concluded, “We are at this point, and each of the members is studying his/her own thesis.” There is a “varietas delectas (joyful variety).”

While this is not a definitive "no," it is painfully absurd that the Vatican needs "further study" on women's full equality in the Church.

We must not allow our attempts to study the past prevent us from moving where the Spirit calls us today: to be a Church with doors open to the fullness of women's gifts and vocations.

An abundance of evidence shows that for centuries, women have served in the tradition of Phoebe the deacon (Rm 16:1), and our parishes and communities are blessed by their gifts. Women are called to serve their communities as deacons and priests. Recognizing the ministerial gifts and vocations of women is not optional.
Posted by Bridget Mary Meehan at 10:25 AM